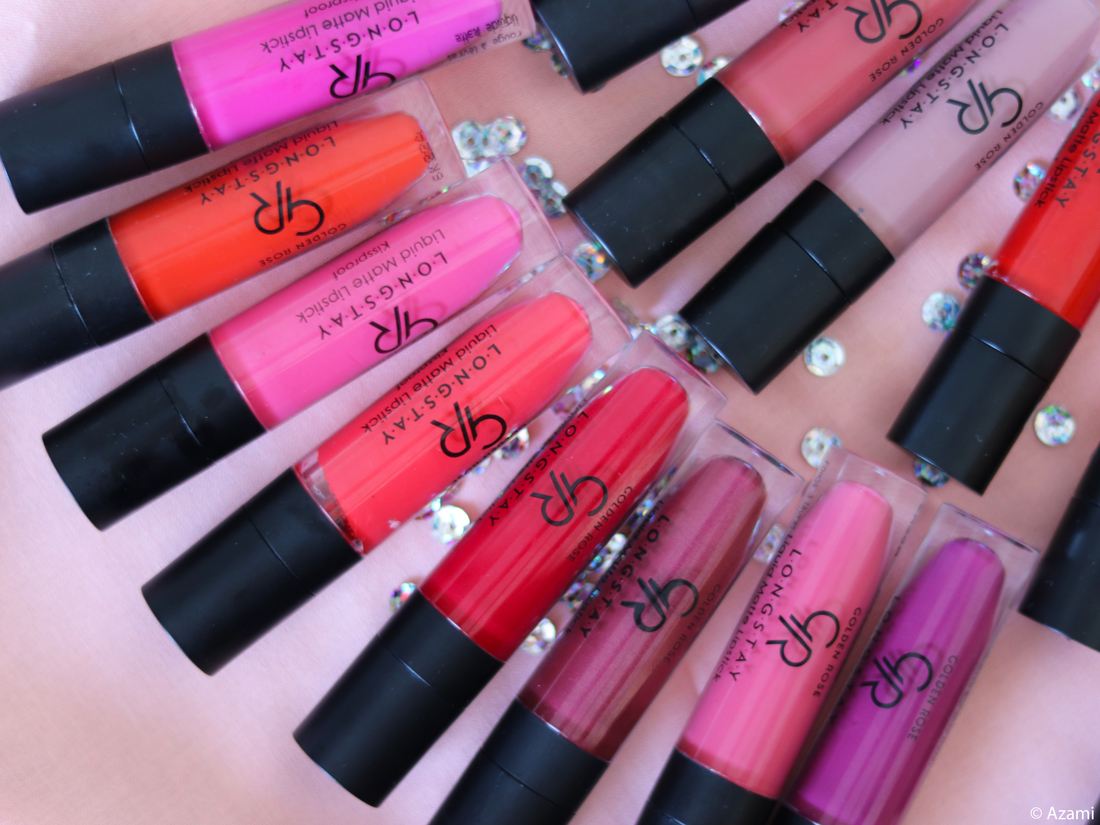 A long, very long time ago, at the beginning of the blog which was called Tissam Est Là, I wrote a few reviews about the Longstay Liquid Matte Lipsticks by Golden Rose, one about the first twelve shades and one about the following five, which ended up being the most viewed posts on my blog ever. They\’re still a reason why a lot of people visit It\’s Azami and since I bought a few shades that I didn\’t have a few weeks ago, I thought I\’d do a roundup of all the colors I now own.
Back when I began playing with makeup, I had next to no money and I only bought very affordable products which is how I came to know about these liquid matte lipsticks. In France, they\’re sold at a place called Cookie\’s Makeup in Paris which I used to visit a lot two or three years ago and they retail for €5.90 each which is a great price since most brands now price their liquid mattes around €20.
The packaging is simple, black and transparent, all plastic, easy to take on a trip or in your bag for touch ups. The only downside with them is the packaging – if you want to place the lipsticks heading down to see which number you want to pick up, after a while they\’ll start leaking a kind of sticky oil that is plain disgusting. Other than that, I really love how cool they all look when they\’re together in my stash and how vibrant all very different all the colors are from one another. 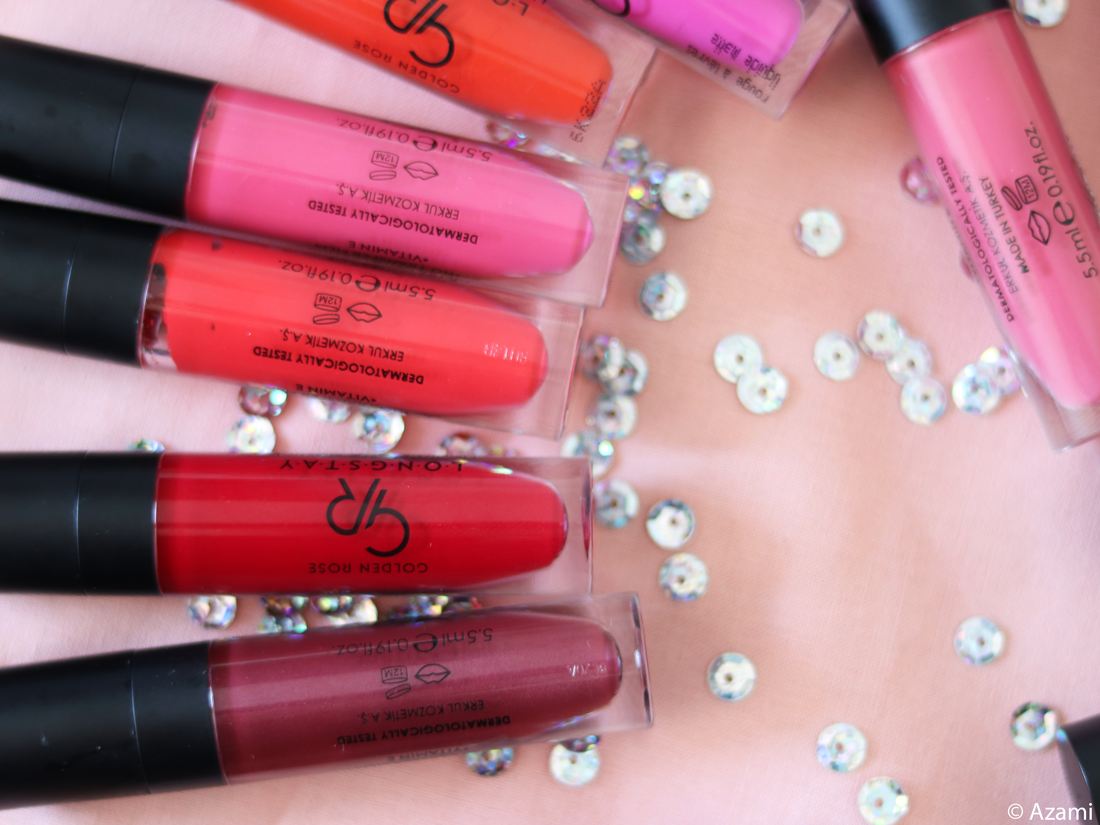 The first shades I ever got were shades 1 to 12 and I have kept only the colors I knew I would use. I don\’t have shades 01, 03, 10, 11 and 12 anymore but you can still see the swatches that I made in my very first post about them here.
In the first 12 shades, I found a great variety of colors ; one or two nudes, a red, two or three pinks and even a greige which was all the rage back in 2016 when I first wrote the post. My favorites among those twelve were number 04 and 06 which I found very peculiar and had never seen before and number 05 which I thought suited me very well. 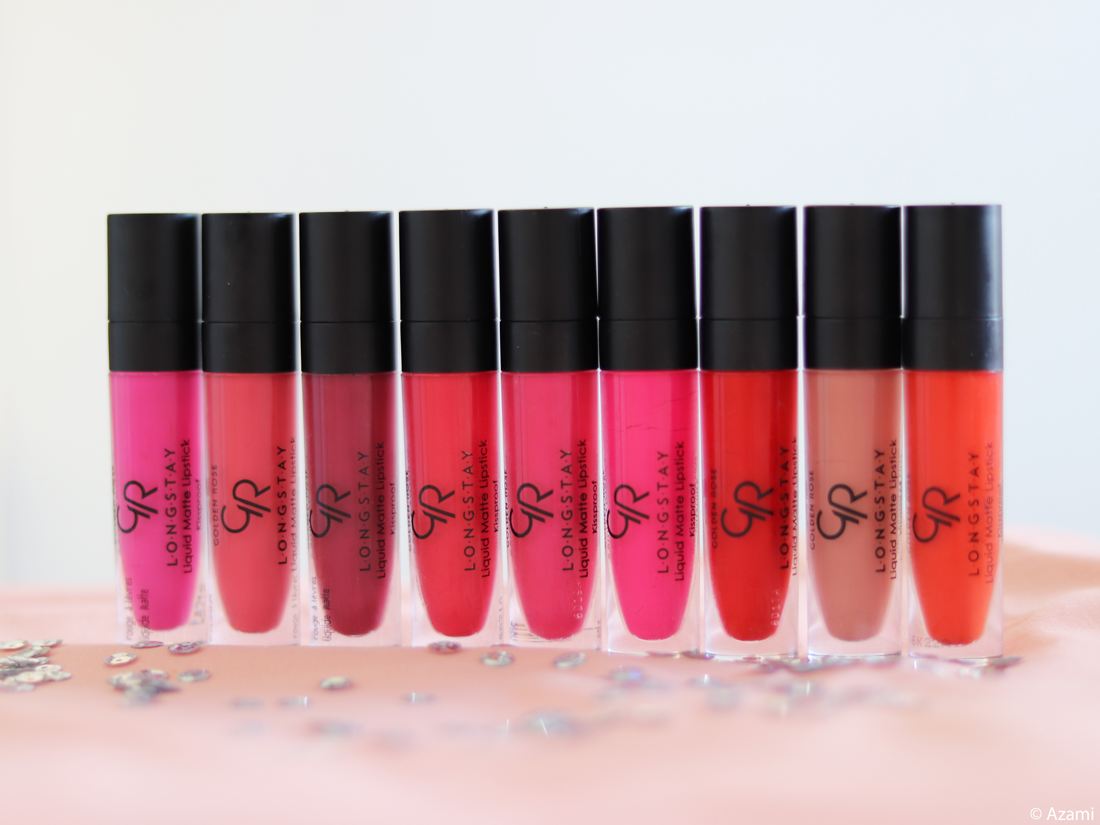 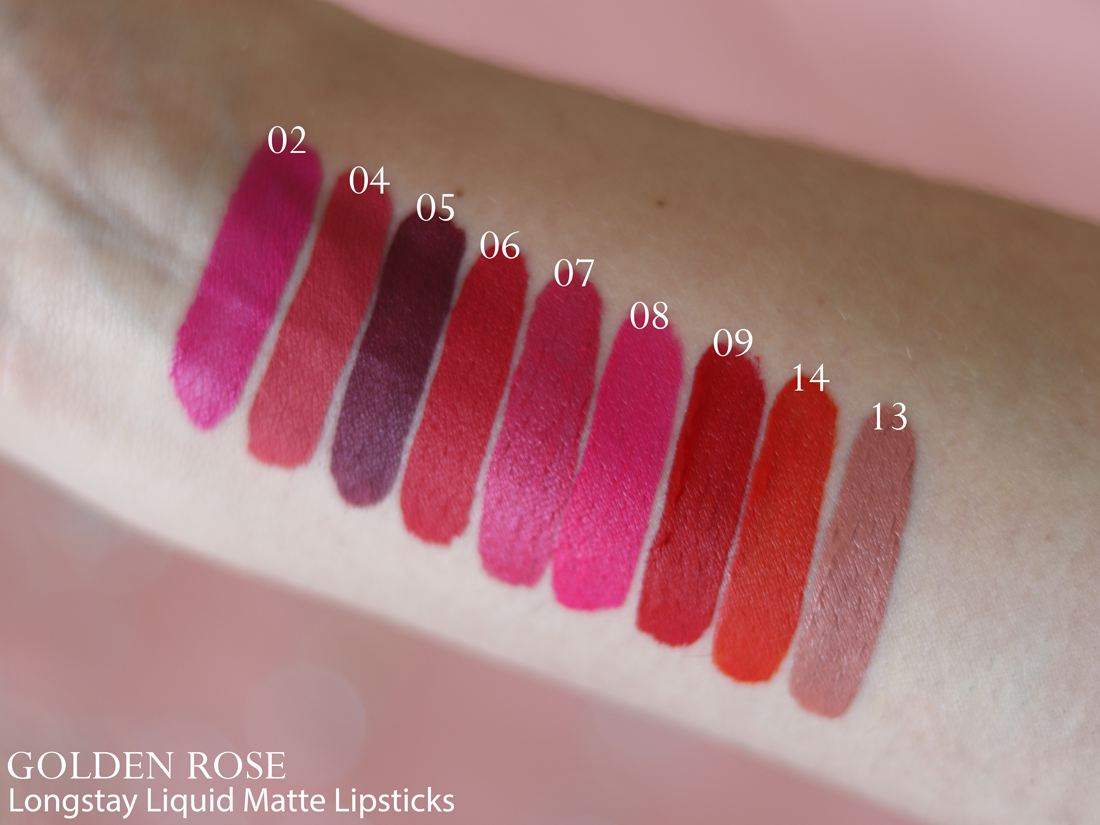 Then Golden Rose added 5 new shades, 13 to 18 and I was in love with them the moment I saw them. At that time I was already into colors but still shy as I had next to no knowledge of even how to apply a liquid matte lipstick. But I fell in love with number 14, a great, bold orange, number 16, a beautiful not-too-nude nude and number 18, a deeper red than number 09.
After that the range was extended again, this time with 8 new shades and some of the most beautiful to this date. Numbers 19 to 26 all have a very autumn feel to them and once again Golden Rose managed to create never yet seen colors. Numbers 19, 20 and 26 are some of my very favorites among the whole range. Actually, I\’ve used number 26 in a makeup look I\’ll post very soon. 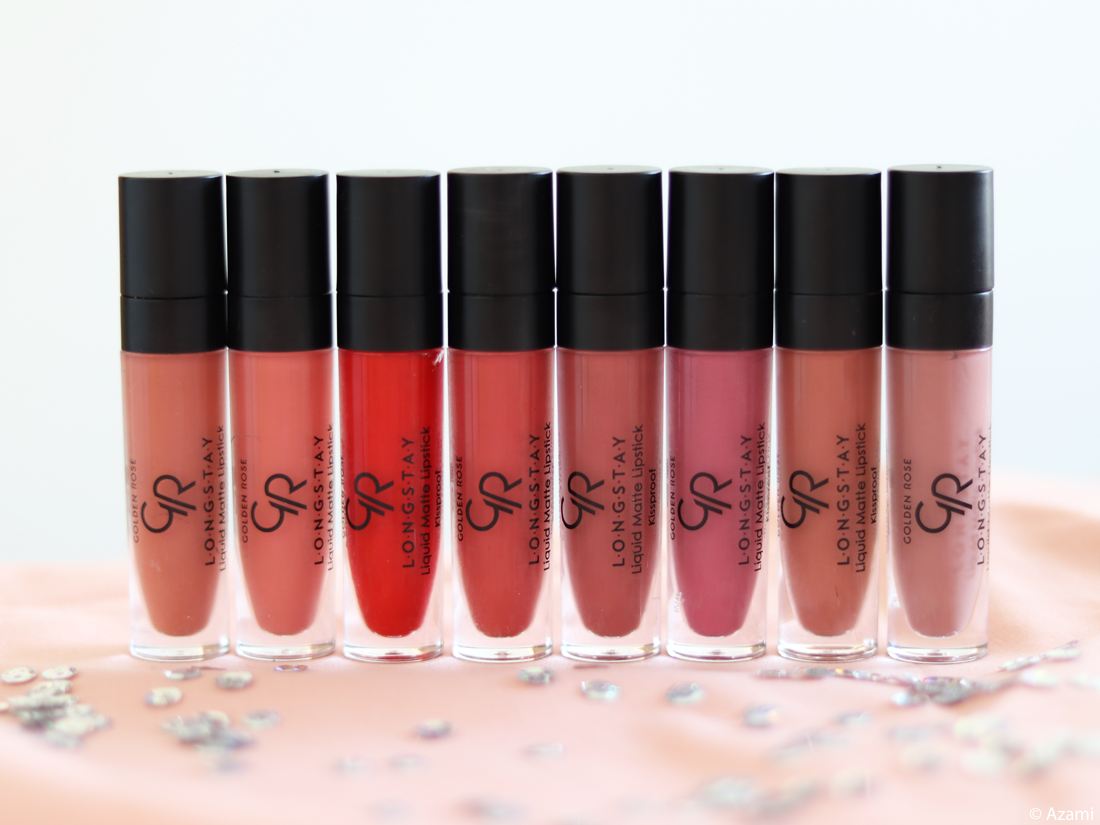 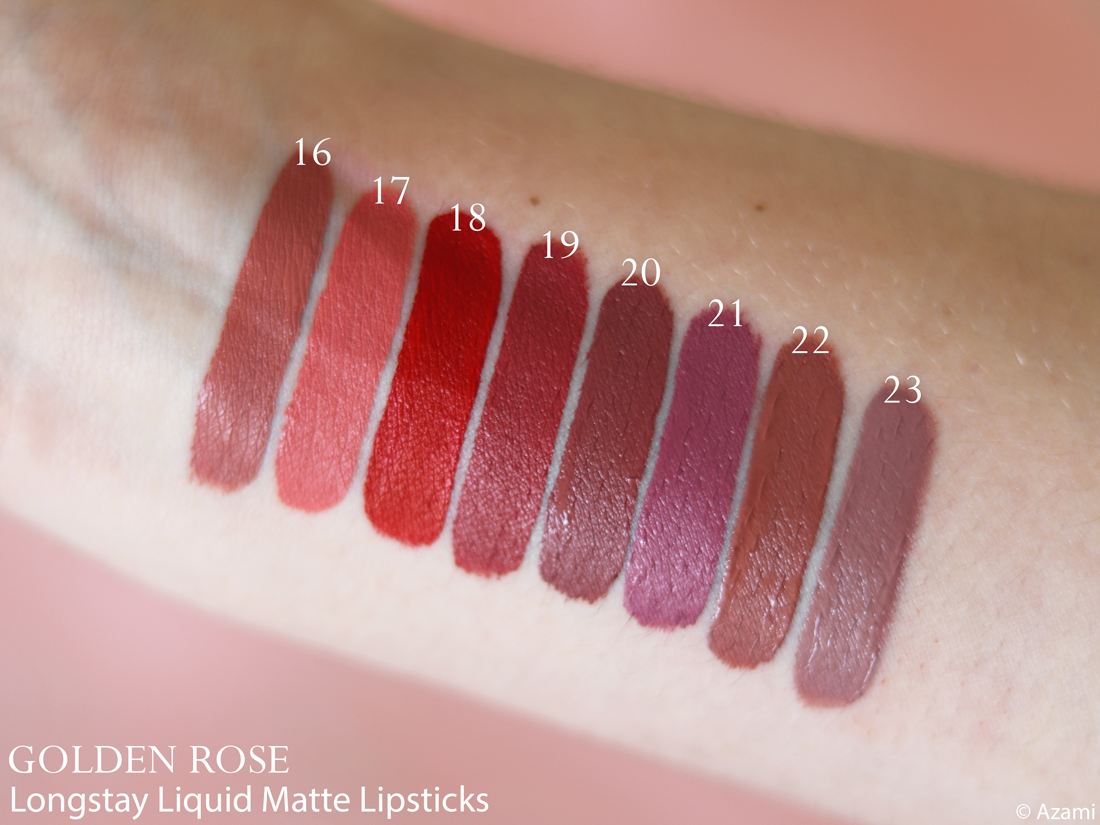 Then Golden Rose released numbers 27 to 29 last year if I\’m not mistaken and added shades 30, 31 and 32 to the range this year. Among those 6, I really love shade 27 which is a kind of caramel, number 28 which is one of my favorite kinds of purple and number 30, the third red in the range and a kind of raspberry one with that. Actually, it does remind me of MAC\’s Dance With Me red shade, only slightly lighter. 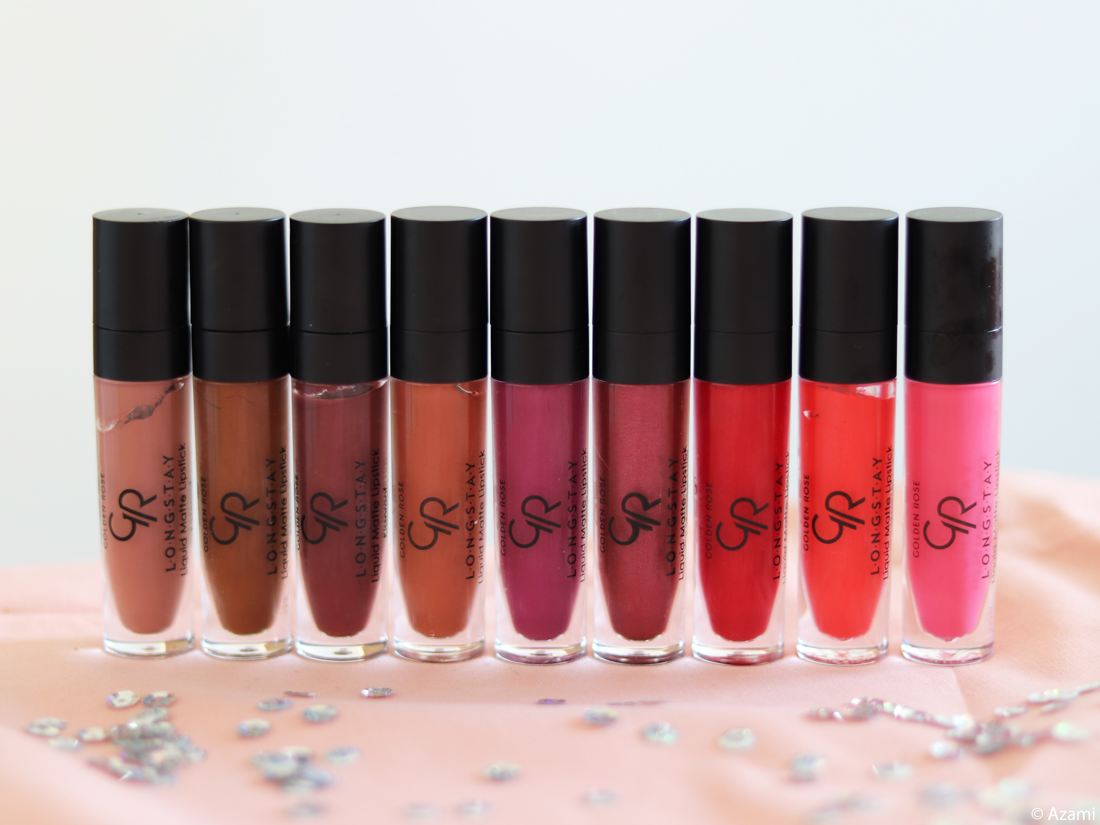 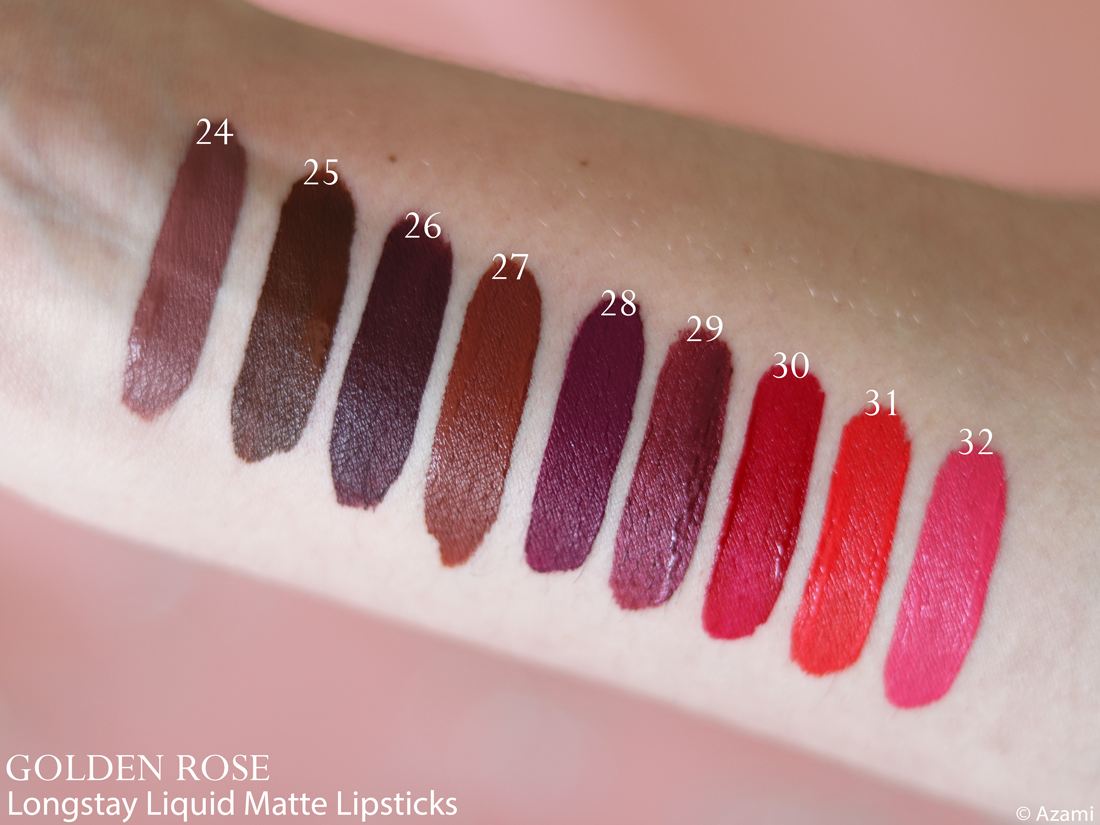 After all this time, I\’m still in love with those lipsticks. They were my first in the liquid matte lipstick field and I\’m deeply attached to them, to the great variety of colors and to the great quality of them. I don\’t feel they\’re completely transferproof but they do have a great lasting power and they\’re super comfy. They\’re very longlasting and you only need a teeny bit to have a greatly pigmented lip. Actually, do use only a little bit, even with the dark shades, you\’ll see they\’ll last way longer. They\’re all tremendous quality ! Xx