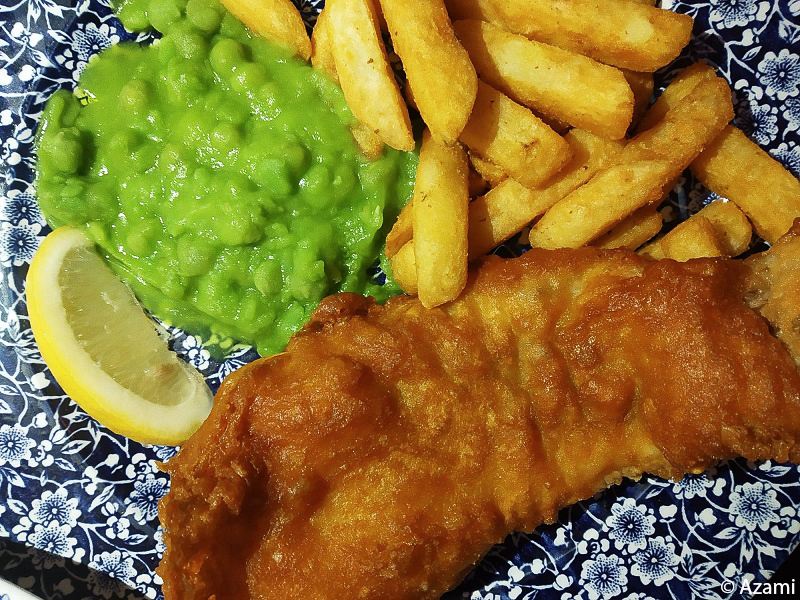 The small vacation I had in London in May with my boyfriend – a mere 4 days that felt so regenerating and so full of surprises ! – was the best ever. I was with my love and I was in my favorite city in the world so really, it couldn\’t have been better. It could have, actually, but London is such a big city with lots and lots to see and discover that a lifetime won\’t be enough to see it all.
This time in London was my sixth or seventh if my memory serves me right and it marked a lot of firsts – for instance, I\’d never eaten a Full English Breakfast so I did, at one of the best places ever called Grounded Coffee Company. I\’d never eaten a crumpet. Mostly it was culinary stuff but that\’s what I base a lot of travel memories on. Food is important to me, always has been, always will. And so, during this stay, I also had the opportunity to eat my first Fish & Chips ever in a pub – something I\’d been dreaming of doing for a very long time. 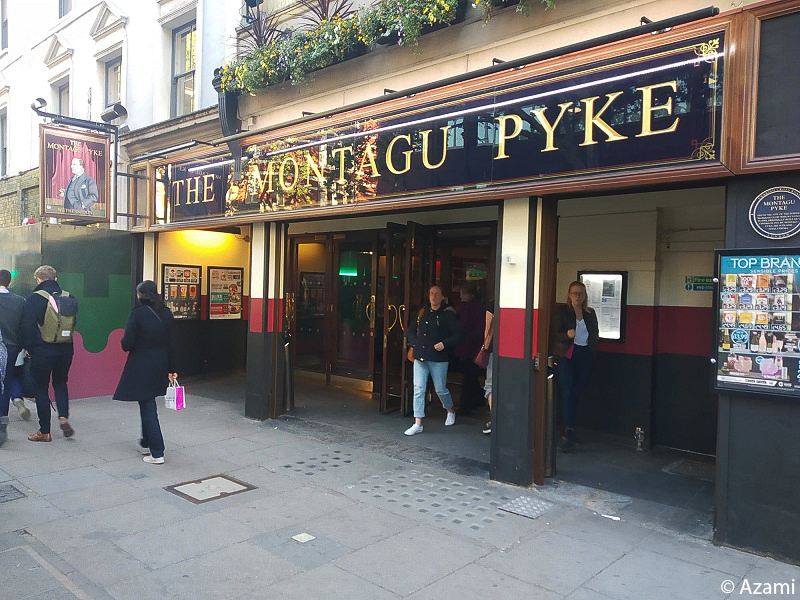 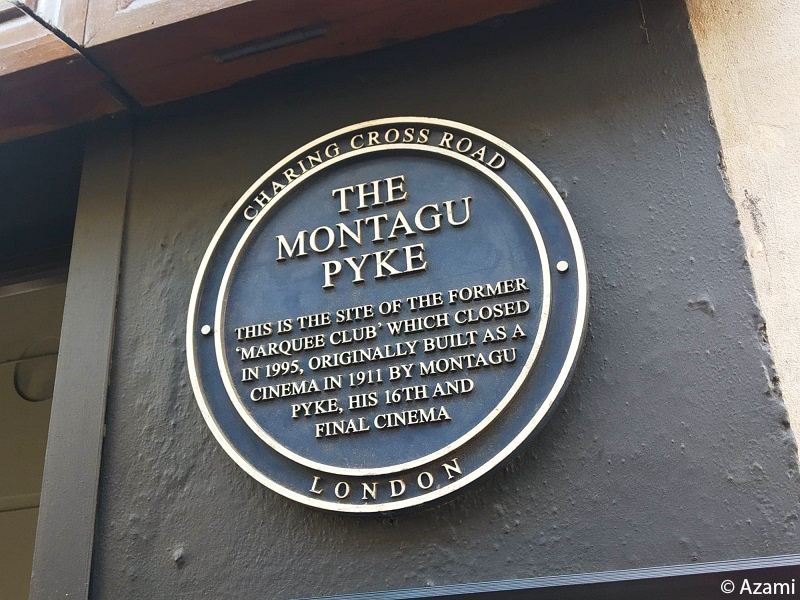 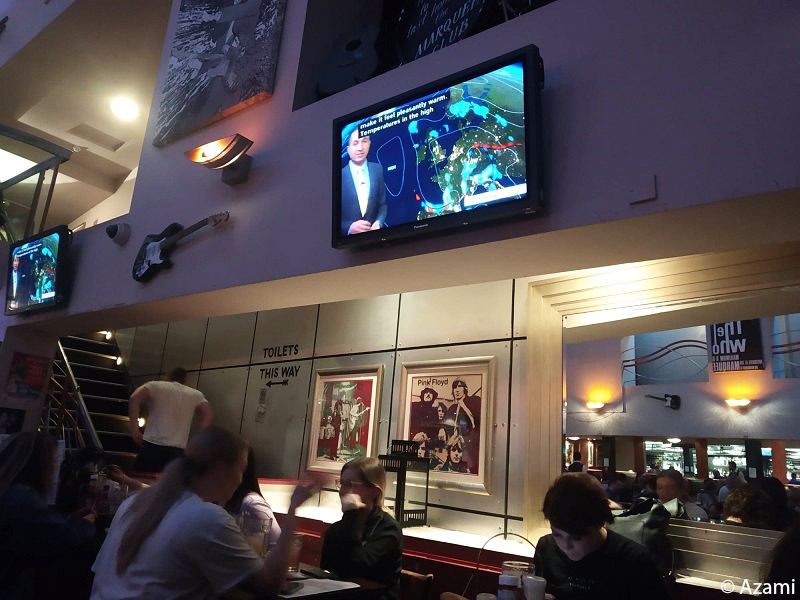 One of the most important thing to me to eat at while in London was a Wetherspoon pub – Wetherspoon is a kind of franchise, just giving its \”protection\” to the pub and meaning it\’ll be quality there. We were taking a stroll on Charing Cross Rd and right after we left a library where I\’d been looking for nutrition books – was it Foyles ? -, we took a look at the menu and I was sold. Lots and lots of things on the menu, especially drinks but what caught my attention was all the delicious comfort food I saw listed.
The Montagu Pyke seemed perfect for me as one of my goals during these four days was to try out as much typically British food as I could. So I chose to eat a Fish & Chips with peas and my dessert was a British Bramley apple crumble – I knew it sounded British because when I go shopping at Marks & Spencer in Paris, all I can see on the apple desserts is the word \”Bramley\” which seems to be a British variety of apple.
I loved the place – it was huge, it was dark, it was 7 pm or so and the place was packed with people taking a drink after work. I just loved the feeling. It was kind of difficult to order ; even though there were a fair few waiters, there were just too many customers so the cool thing Wetherspoons offer is you can order through the Wetherspoons app on your phone ! We did, and the food came so fast after that – I was so impressed ! 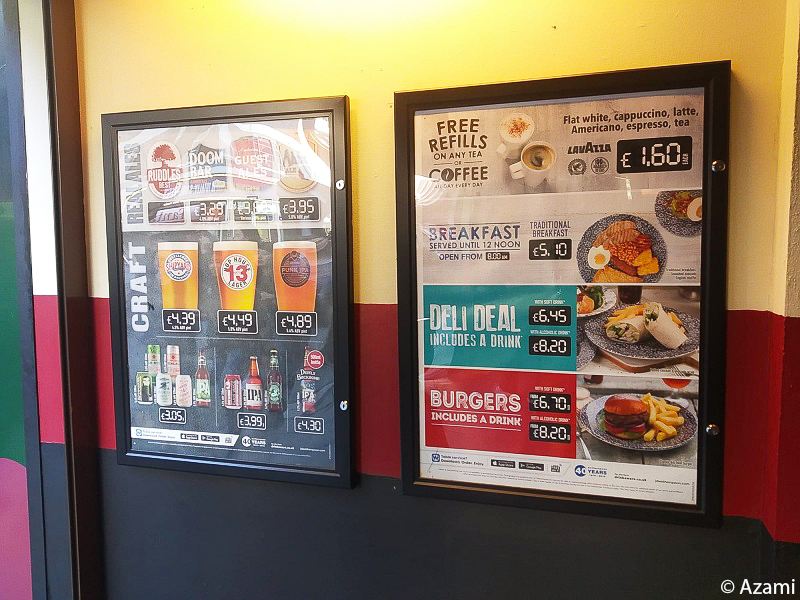 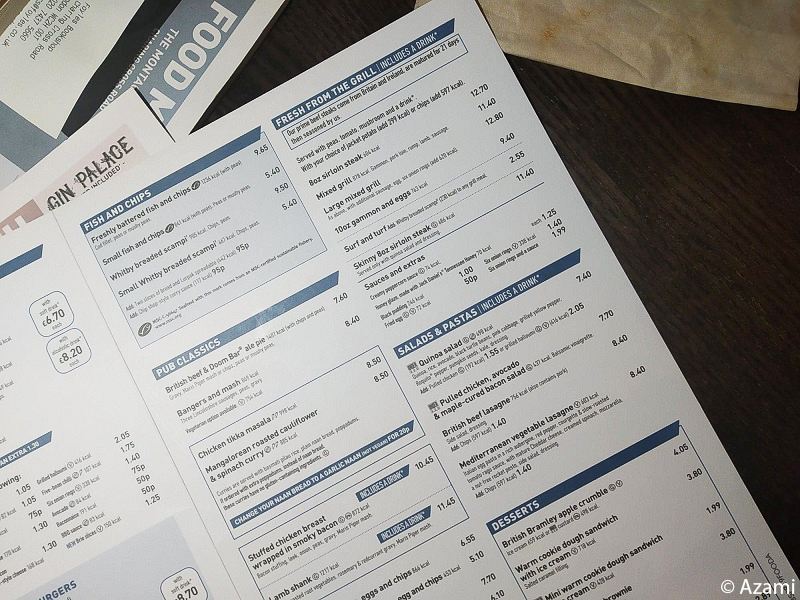 So I got a Freshly battered fish and chips (£9.65) that was delicious. A few things had been keeping me from trying out Fish & Chips, like I\’d heard the fries in England were all mushy and sometimes the batter for the first was not crispy at all and my own dish was nothing like that.
Actually, it was the most delicious thing ever. I thought it was very well priced and I will be going back for more when I live in London. Very well-sized too, I think I couldn\’t finish the fries. I was very pleasantly surprised and when my dessert came, I found myself expecting such an excellent taste. 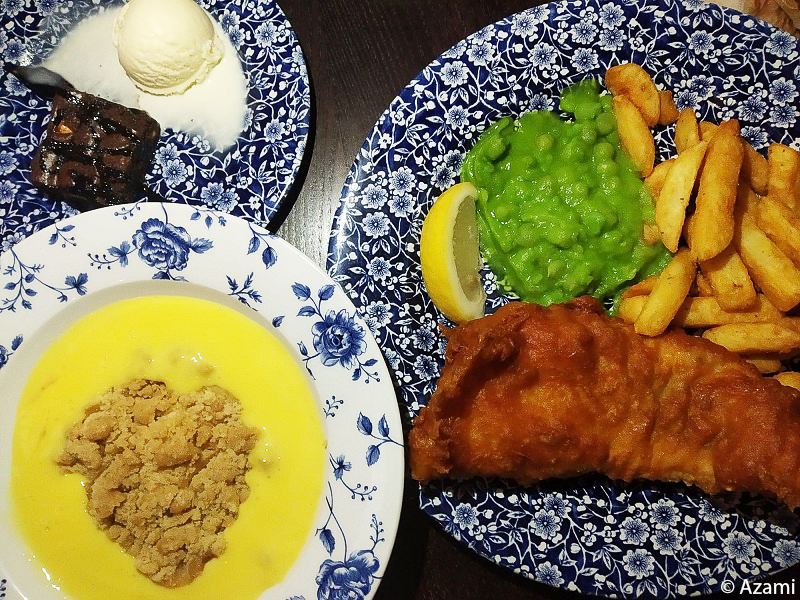 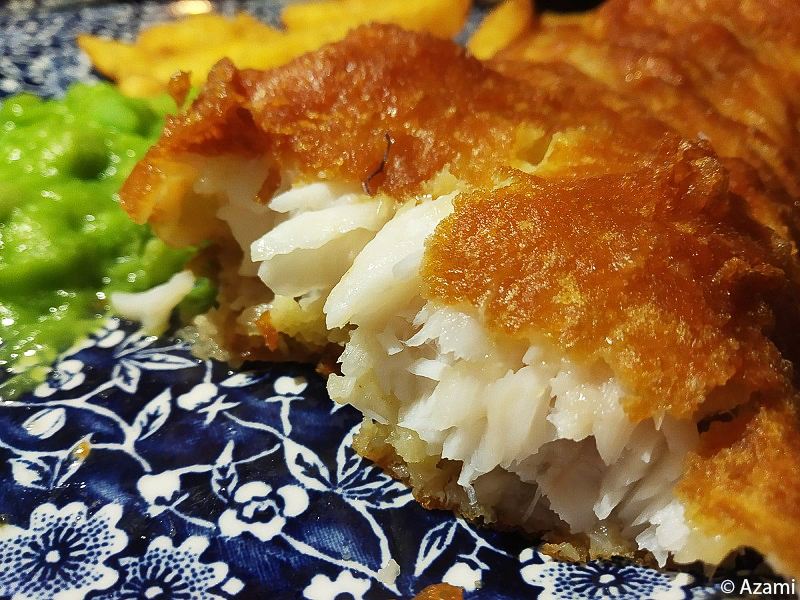 Wasn\’t wrong. The funny thing with dessert in almost all the restaurants I\’ve been to in May ? They\’ll ask you if you want custard. Custard, custard, custard, they\’ll just pour some everywhere. Oh, I won\’t complain – I just love that. In France, there\’s something called \”crème anglaise\” which I\’ve finally come to understand, means custard but it\’s nothing like the custards I\’ve gotten in the few restaurants I\’ve eaten at.
So I asked some custard with my apple crumble and when I got it, I found it funny that it was warm ! Such an amazing feeling, warm, creamy custard in my mouth perfectly matching the sweet and sour of the apples. And can we talk about how buttery the batter felt on my palate ?! The crumble was the most pricey dessert of the menu (£4.05) and it is aptly priced – this is also something I\’ll be ordering again with immense pleasure.

My boyfriend got a burger for a dish and since I didn\’t taste it, I see no reason to include it here but I did grab a bite or two from his delicious chocolate brownie – as I\’m writing, I\’m salivating although it was two months ago since our visit to Wetherspoon. Guys, if you like food as much as I do and love yourself some tasty, comfort food – or if you\’ve never tried British food ! – just go to Montagu Pyke. I\’ll be trying different Wetherspoon restaurants/pub food in the future but this one has become a go-to address for me, in one shot. 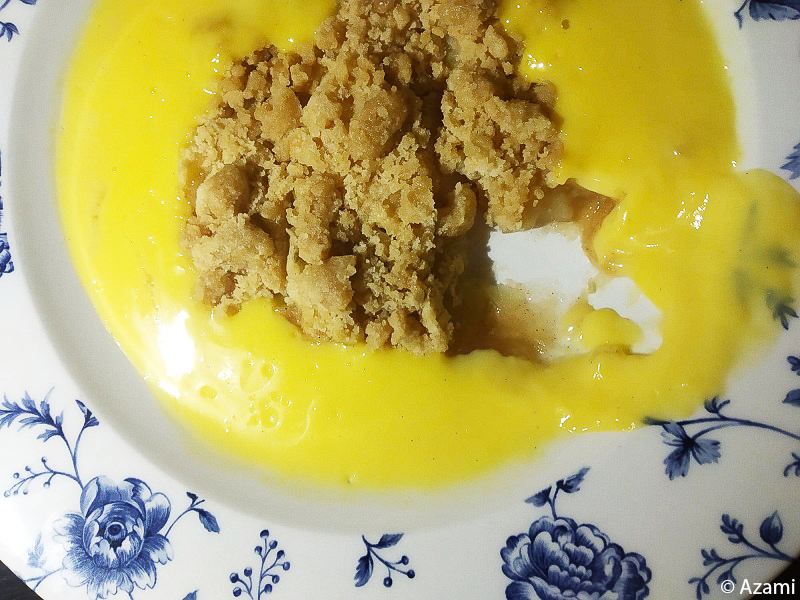 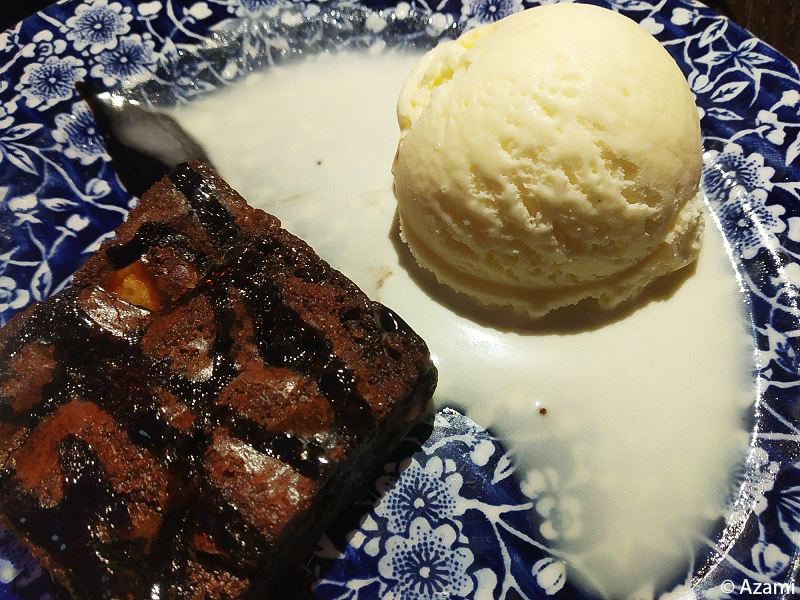