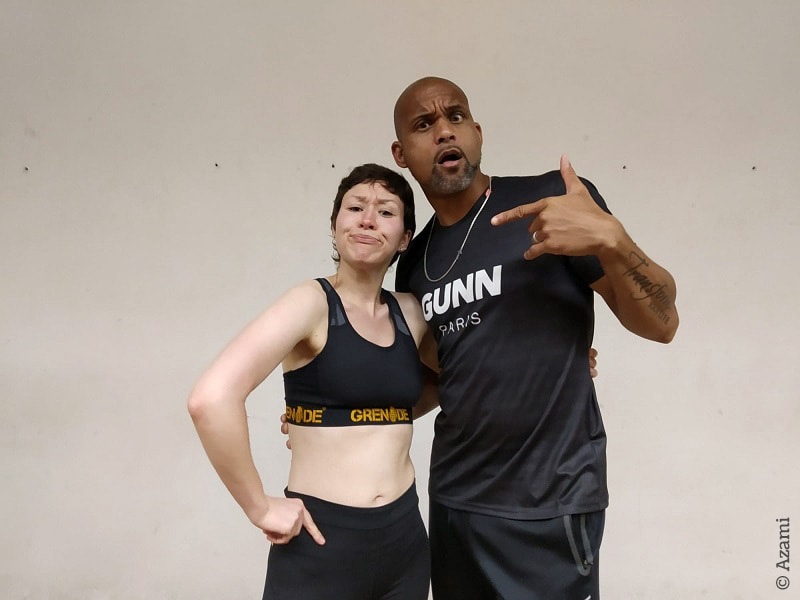 ♪ While I was writing this post, I listened to Way Down We Go by Kaleo. Try it !
June 8, 2019 will be forever engraved in my memory because it\’s a day that changed my life. I have been training with the famous fitness trainer of the Beachbody Insanity programs, Shaun T, since I was 11 years old. My very first best friend, an American woman called Candace, and one of the sweetest women I still hold very dearly in my heart although I haven\’t seen her in years (I love you, girl), made me train almost every day I was seeing her and mostly, it was Shaun T. I can\’t remember exactly which workouts I would do, maybe some from Hip Hop Abs, maybe T25, although I don\’t even know if they were released – that was thirteen years ago…! 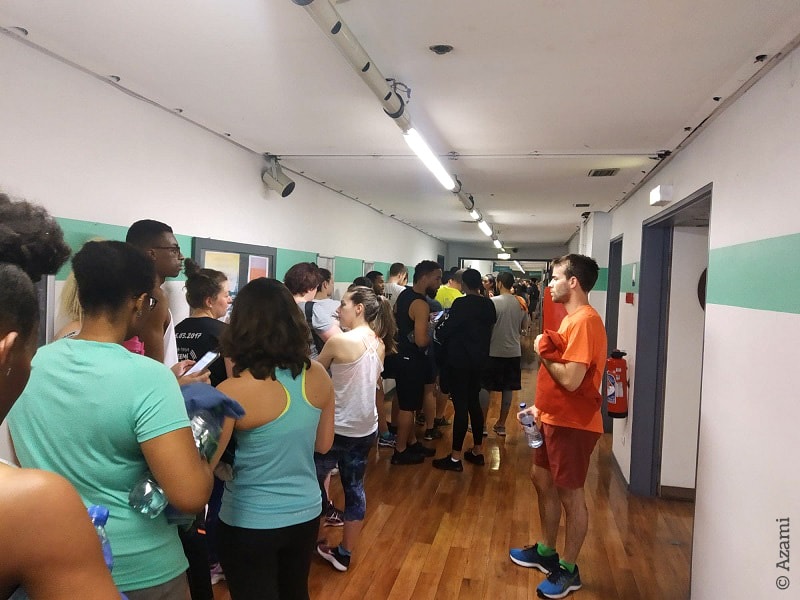 From age 11, I had trouble with my weight – I don\’t think I\’ve ever been sick with my weight, I might have had some bulimia at some point but I was never anorexic, and only those last years when I became of age did I have trouble eating properly so I became overweight (74 kgs for 1m63 was my max, last summer). No one ever taught me to eat well, whole foods, I actually come from a household where refined sugar is very much appreciated as well as pasta, bread, all those things I now eat maybe once, or twice a month. Also, watching Fashion TV from age 11 was probably not a good idea and when I was sixteen, I did some kind of diet I thought up on my own where I remember eating grated carrots at like, every meal. I cannot say that Shaun T \”saved me\”.
But from the age of sixteen, when I regularly started working out with his Insanity videos, I saw a change in my body, I saw a change in how I saw myself. I didn\’t like my teenage years and the upbringing I had from age 14 – it was hard. Family matters that I needn\’t discuss made me feel… I don\’t even know how they made me feel. But training with Insanity was crazy, was hard enough that I did myself good while hurting myself – and that\’s the best kind. At that time, I only did the second video, the Plyometric Cardio Circuit – I was afraid of doing harder ones, I think. 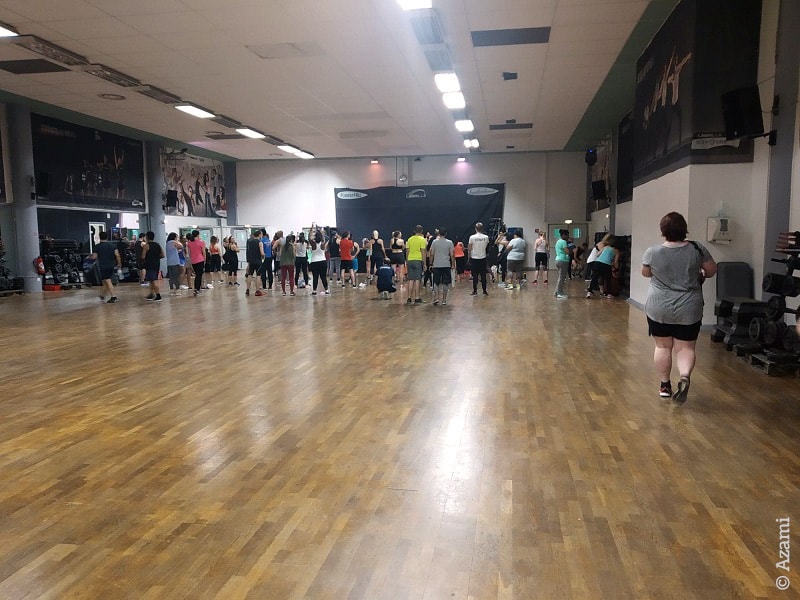 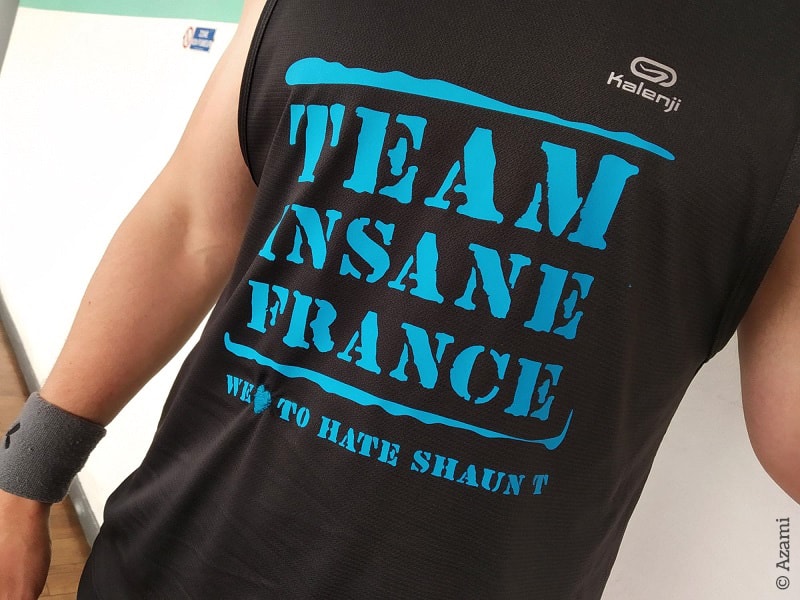 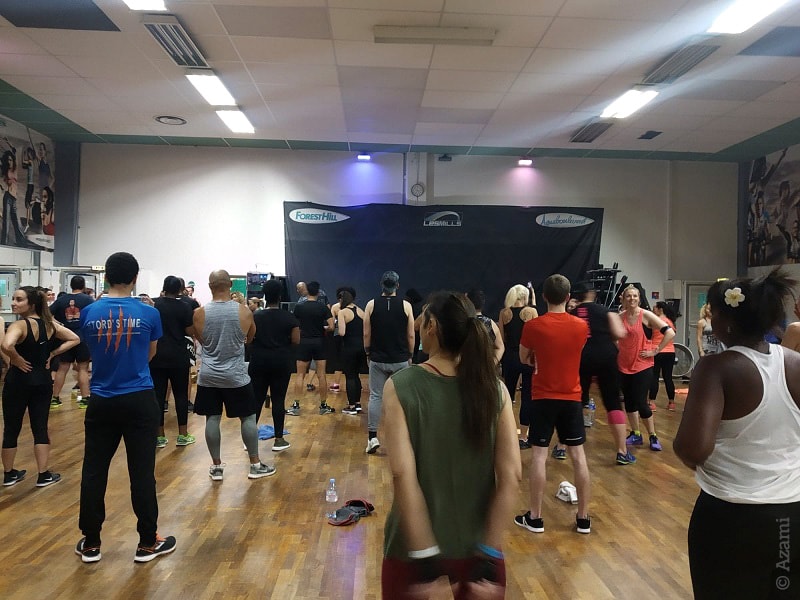 A Change As An Adult

But back in November, on the 19th, one day after my birthday, I started Insanity again. Again the diet wasn\’t on point, I tried to eat as clean as possible with food weighing and macros tracking and it worked, it just wasn\’t the Nutrition program included in the Insanity pack. There, I lost so much weight. Little by little, frustration by frustration, workout by workout, it went away. I\’m still not what I want to be, I am really after that 6-pack but I\’m quite unsure I\’ll ever get it, being a female. Or maybe it\’s just harder, in which case I\’ll just keep fasting like I usually do and work out and it\’ll all come off eventually.
So Shaun T went from being a crutch to my hurting 16-year-old self to being a big help in my turning my whole lifestyle around at age 24. I wanted 2019 to be a great year for me and it has been ! One day, I was asking when the Shaun T Trains Europe event would take place in Paris and when the tickets would be on sale and one thing led to another and I found myself helping out in finding a venue for the event ! I did my best until the end and couldn\’t find a place, fortunately more people from Paris went onboard and helped out and well, you know the end. To thank me, Shaun and his team offered me two V.I.P. tickets for the event and I think you\’ll believe me easily when I tell you how happy I was that day (you know, when it feels like even your heart is trembling with joy inside of ya ?). I was so happy, I already knew I wanted to invite my boyfriend because Shaun T helped him turn his life around as well and it was a great motivation for him to hear Shaun shout during his workouts in the morning, when he needed to get up at 5.30 am to complete the Max 30 Insanity workout before going to work.
BOY. That introduction was huge. But this all needs to be documented for later, when I\’m old and have children and for everyone who\’d like to attend an event by Shaun T and wants their life to change for the better. 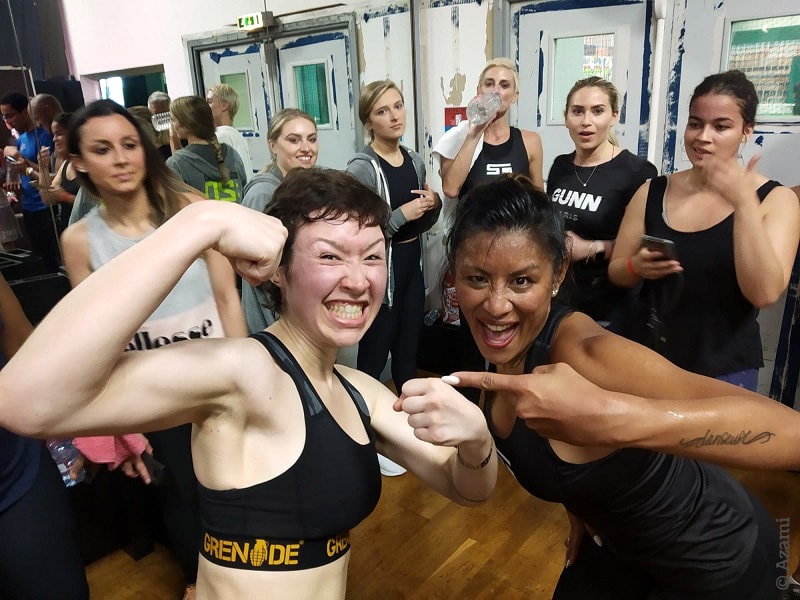 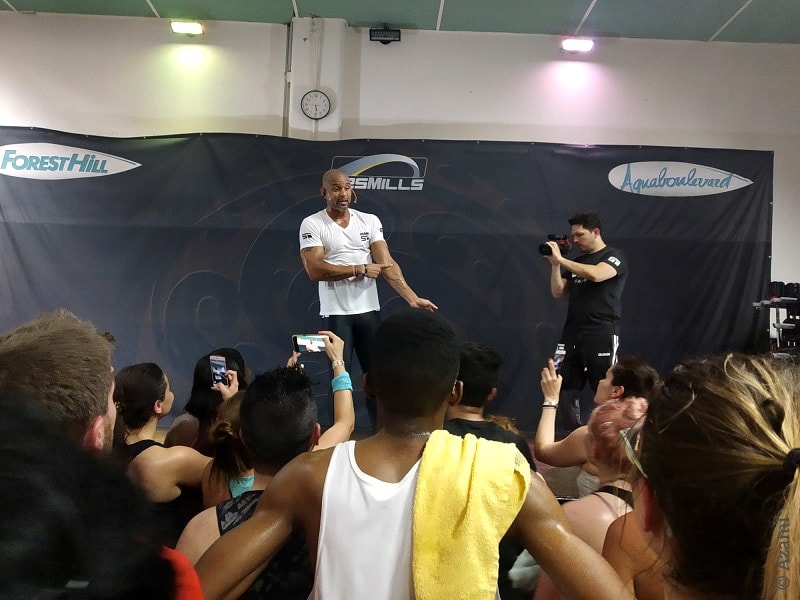 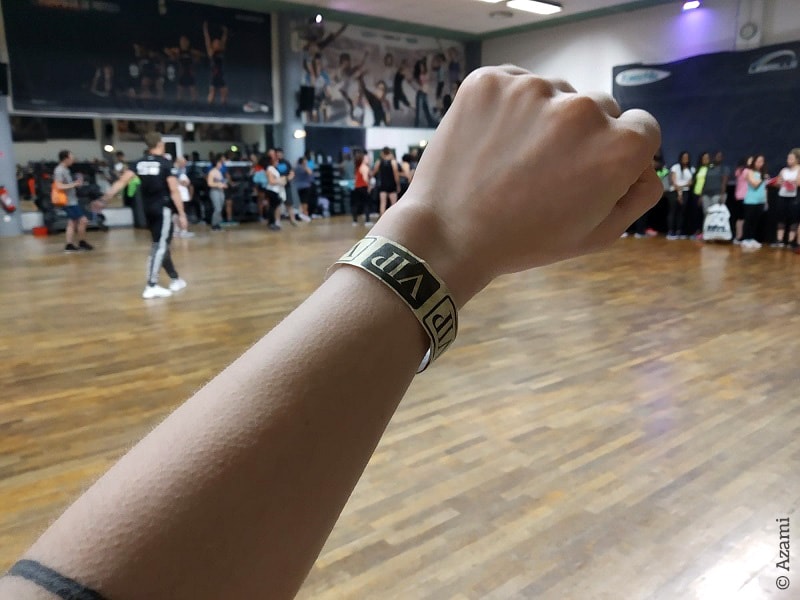 On June 8, we got ready, I was so stressed that I\’d been snapping at my love for two or three days in a row before the event for no reason. That day, I was excited. So excited that we arrived a good 25 minutes before the event… at the Aquaboulevard in Paris. Just a stone\’s throw away from our apartment. I mean, we were there in 20 minutes ! Introduced myself to the amazing person I had been exchanging emails with, Alex Coloreo (you were such a sweetheart all this time, THANK YOU !), and she gave us our VIP bracelets (the ones that allowed us later to have our pic taken with Shaun). And off we went to the queue that you\’re seeing above.
The tension and excitement were high before Shaun T arrived in the room, and I cannot believe I didn\’t know that another trainer I love, Tania the Machine, was coming ! She\’s the woman I have had my picture taken with also. I\’m not freaking out and becoming all crazy when I see a famous person, like, you\’re an actor, cool. But those two are people that helped me change my life around when they weren\’t even aware of it. So yep, did become crazy when I saw her ! 😀
And then Shaun came into the room, saying things in French that sounded all cute because well, the American accent, right ? AAAAAND we started working out. He was on stage with Tania, his husband Scott was training as well and he introduced the newest member of his team, Julie Voris, who trained doing modified.
The workout was HARD ! And it was awesome. I was pumped, it was amazing to be training with maybe 200 other people that Shaun T brought together. Everyone was suffering, I hadn\’t been training HIIT for maybe two or three months and I was so surprised at how well I did… I even noticed my positions had gotten better, like when you do pushups, a bad form can hurt your body. Well the only thing hurting me then was the good form x) 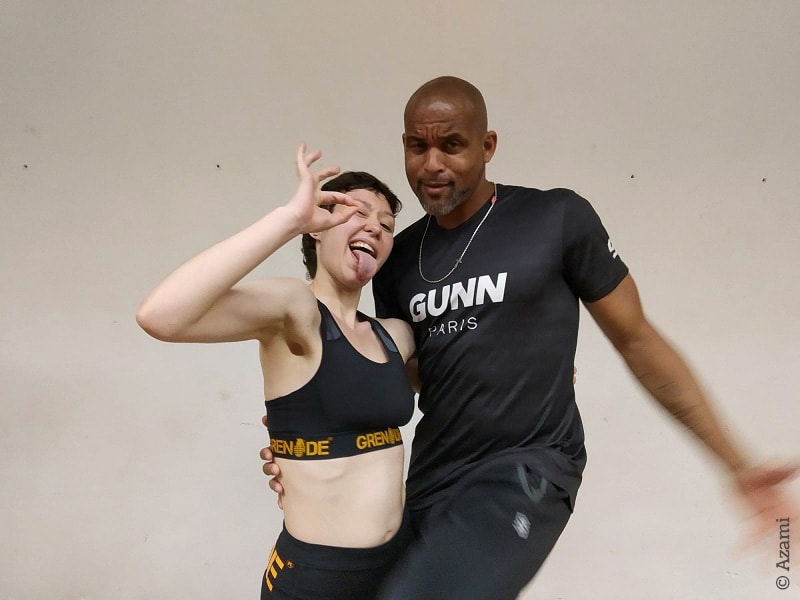 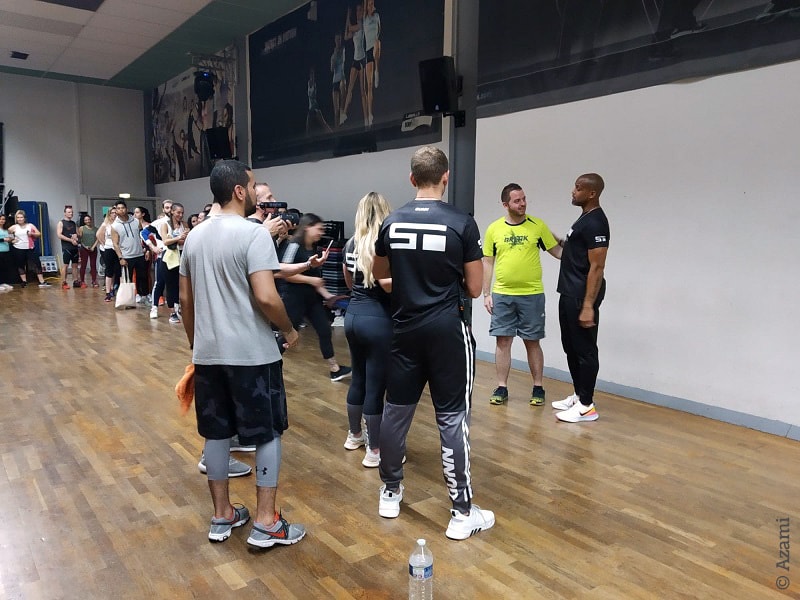 About 45 minutes of workout, and then we sat on the gym floor and Shaun talked about motivation, treats, all those things. There was a Q&A going on at the same time and we could ask him whatever we wanted. Obviously that was the moment I couldn\’t think of anything to ask, haha ! But I was happy to see people telling him also how he\’d helped them change their life, I was amused to see a Moroccan guy offer him Arabian biscuits (I\’m Moroccan and that just seems so natural and unnatural at the same time that he\’s done that, so fun), I was surprised to know there is a whole Facebook group for Insanity and Shaun T (they were all sporting the same T-Shirt as the guy I photographed above)… What a great moment it was, and not long enough ! Near 7 pm, he had to stop answering questions and had to start taking pictures with us. Luckily, I found myself first of the line and Alex took great pictures of us and she even introduced me to Shaun, saying I\’d helped for venues and I was rewarded by a big hug 😀 I love the pictures I have. The happiness I felt and accomplishment are pouring from these photos.
► PSSST ! WHAT HAPPENS IF I FAST FOR THREE WHOLE DAYS ? ◄

From this event, I learned things. I learned that I want to be a trainer, or help people with nutrition. I am a makeup artist but I want to do this as well. I have been able to turn my life around. I need to help others do it as well. Right now, I\’m living in Paris but as of November 15, I will have moved to London, UK. I don\’t know how things happen to become a trainer there, at least, I know there\’s Beachbody On Demand there ! 😀
One thing that I that was kind of blurry for me was about the food. Food is such an addiction for me. And if there\’s one thing I have to remember, that is \”Chase the feeling, not the looks\”. Chase the feeling, that saying has been one turning point in my life and sometimes has stopped me from eating things I didn\’t really want because my brain was saying \”Sugar ! Sugar ! Sugar !\”. I\’m hoping to participate in the London event next year if there\’s one, and until then, I hope you find the strength to take care of yourself, and Conquer Your Mind.