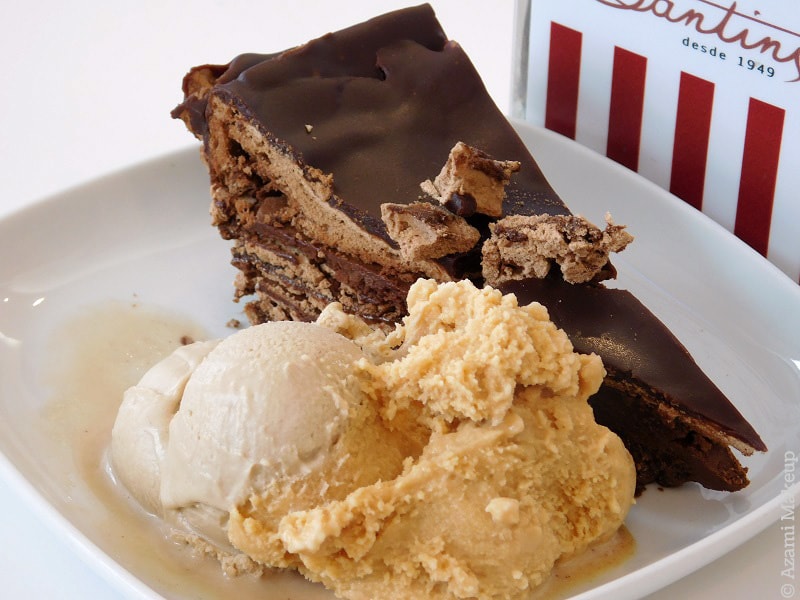 One of the highlights of my Lisbon trip back at the end of March was definitely Santini\’s. Of course, I really, really enjoyed the dozens of Pastéis de Nata that I mostly got from Nata de Lisboa, the best place on Earth for pastéis it seems to me, BUT my boyfriend\’s cravings for ice cream led us to try a place called Santini\’s and it occured to us pretty quick just why this place has been an institution since its creation in 1949, so much that when I talk about this place back in France to people who live in Lisbon, they all nod in agreement with excited voices. 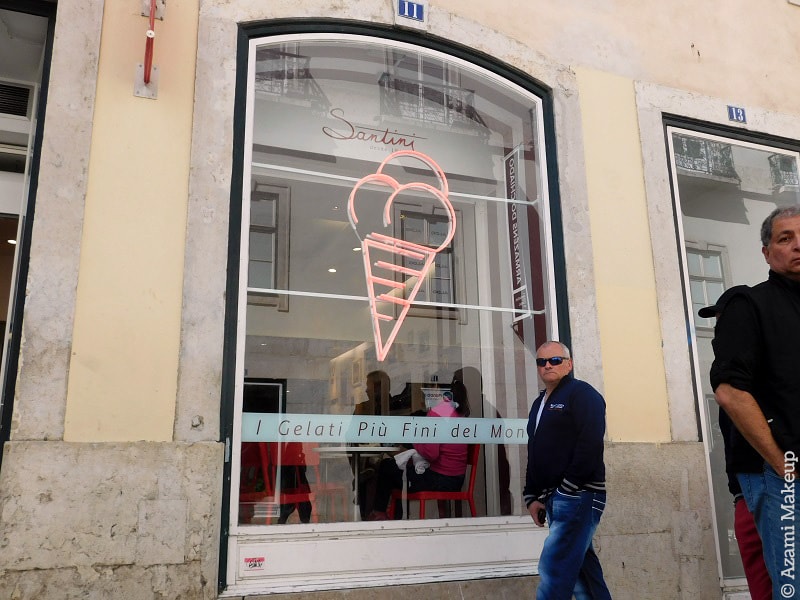 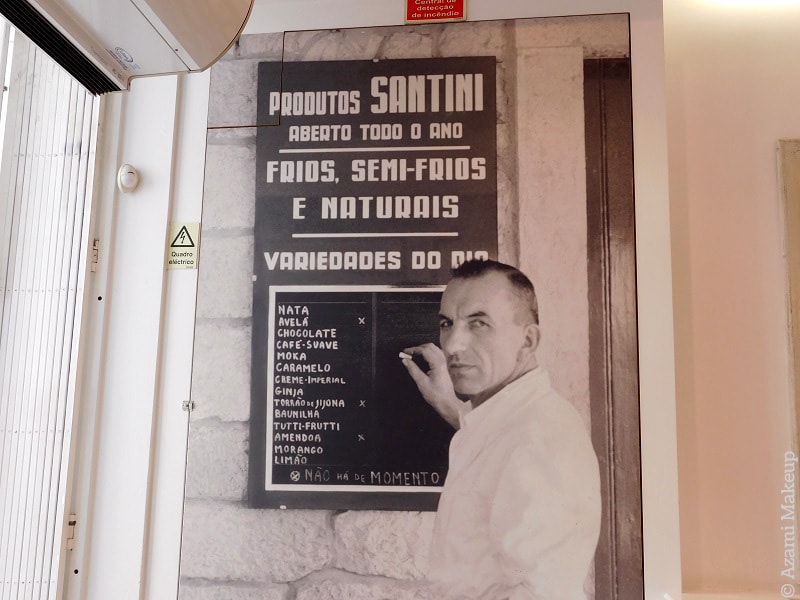 We stayed three or four days in Lisbon but we must have each eaten 4 or 5 ice creams, at least one per day, with two flavors each time in the Chiado store ! I think our goal was to try them all – like Pokemon, but for ice cream haha !
What first attracted us to this place was actually a couple in the street eating an ice cream where both flavors were swirling around each other, enough that you could taste each but also taste the mix that they created. The pattern was so pretty (you can\’t see it on my plate here because they only do it for cones or pots of ice cream), it made us want to try them asap ! Each time, we took a Small ice cream in a cone, a homemade cone with a very delicate and strong taste of happiness in it ; for a small ice cream you\’ll pay €3.20 and you can get up to two flavors. A small one to begin with is quite good because I didn\’t feel it was that small at all ! 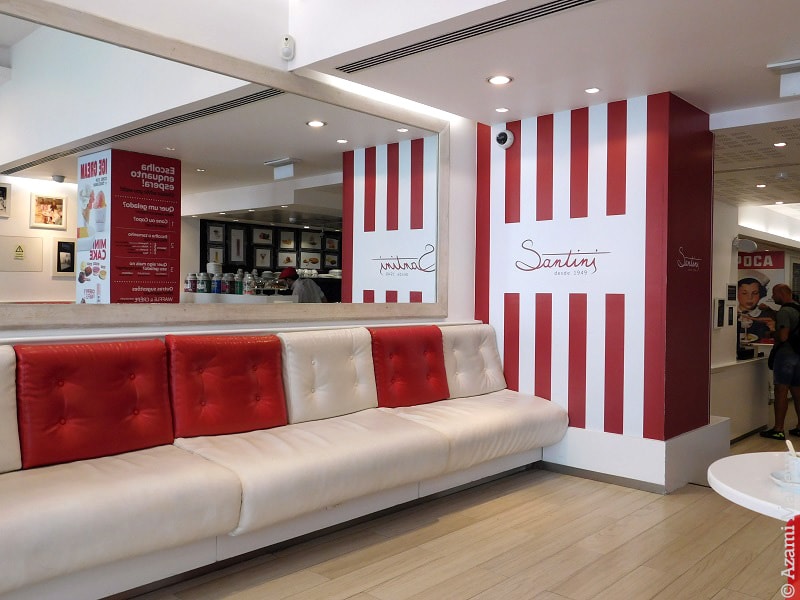 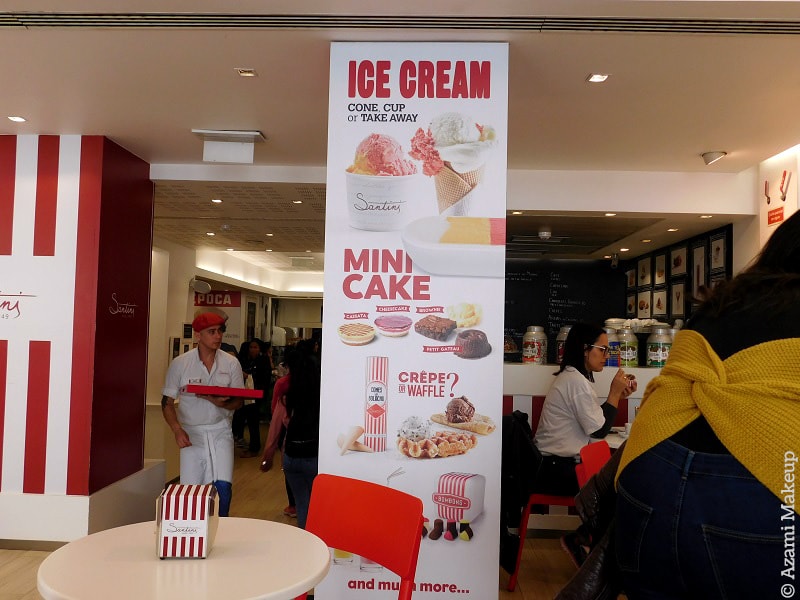 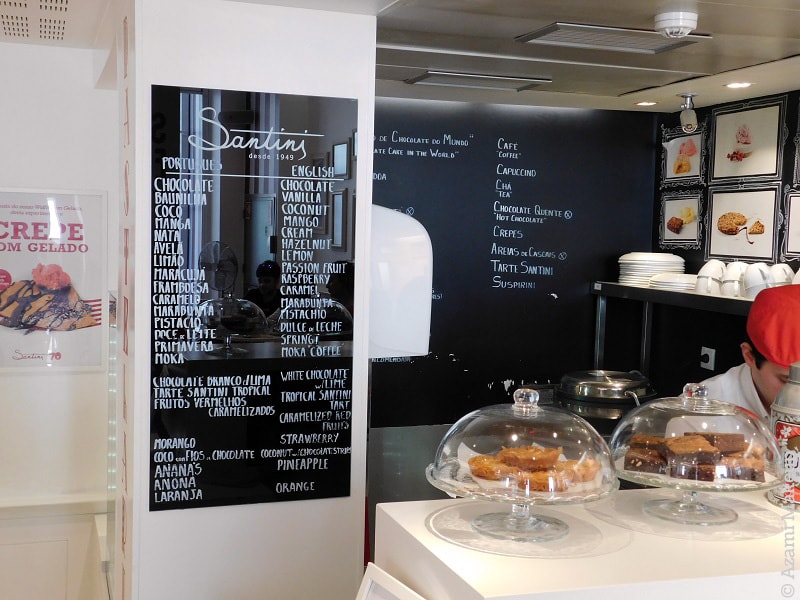 On the last day or the day before, I wanted to get some more pleasure out of Santini\’s and I got two flavors (as per usual) as well as a slice of their \”Best Chocolate Cake in the World\” (€3.50 for a slice) – it had hit my eye from the very first day and I SO wanted to try it ! I\’m really glad I did ! It had absolutely nothing to do with a French gooey, rich chocolate cake – this one was made of chocolate mousse and meringue, something very unusual to my French palate ! It was very good, very chocolate-y indeed and I\’d definitely eat that again. I think this time, I\’d gotten a Dulce de Leche ice cream with a Hazelnut one and OMG, that hazelnut ice cream… We came back for one more of these. 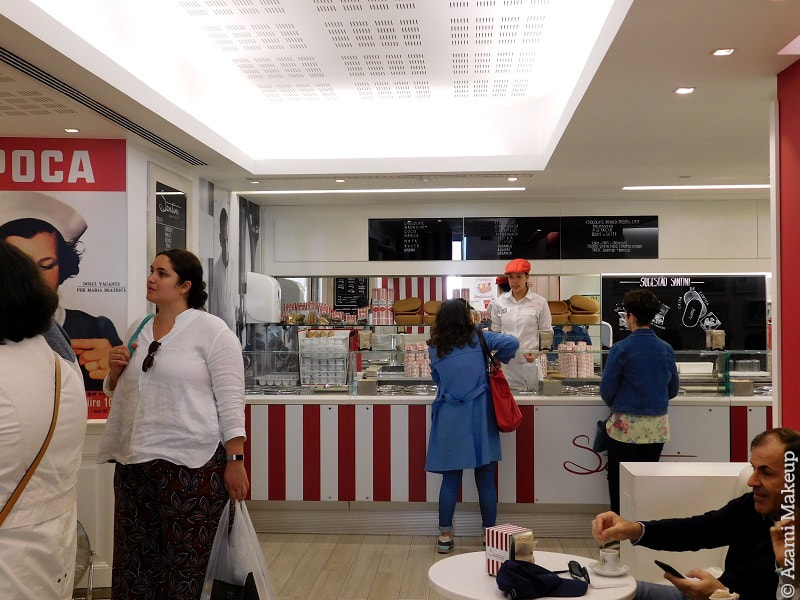 ► MORE TRAVEL GREAT FOOD : London | CrossTown Doughnuts (Vegan & Not Vegan !) ◄
Being a firm believer in ice cream whereas my boyfriend is all about fruit and sorbet, I was rather surprised to change my mind when it comes to Santini\’s : their very best ice creams are actually sorbet. You can definitely taste every fruit well, the taste is strong and tangy and wow… When you\’re there, try the Raspberry and the Lemon ones, you won\’t regret it ! You can also buy a liter or more of ice cream and bring it back home to enjoy it later, that\’s such a cool option !
For now, there are no Santini\’s outside of Portugal – what a shame, but it would made me come back to Lisbon, or Porto, or Cascais, just for an ice cream of theirs ! Also, the cool thing is – Inglot\’s makeup store is located just down the street ! Haha, a makeup artist never keeps her eye off her passion, right ? Have you ever tried Santini\’s ice creams ? What are the places you recommend I next eat in Lisbon ? Xx