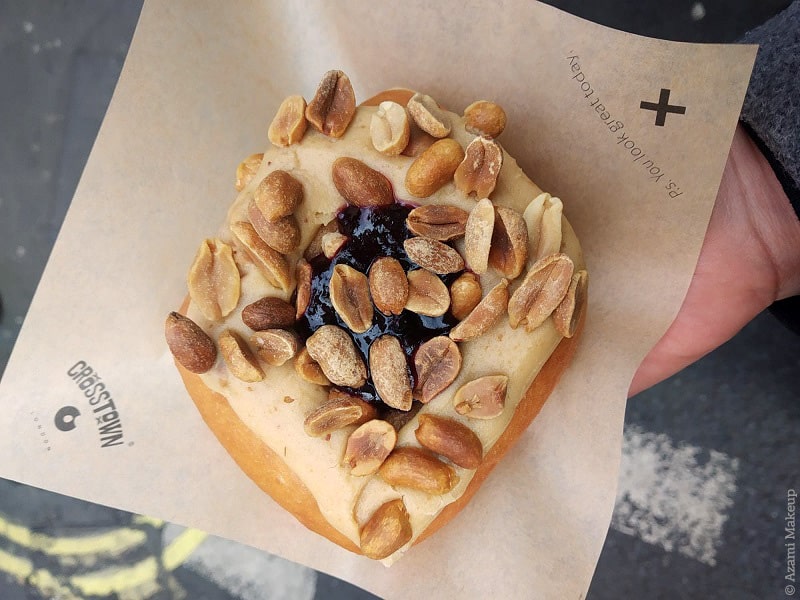 Less than three weeks ago, I went to London to do makeup on two editorial photoshoots I had planned with my friend Emily Jones with whom I\’ve already worked twice in the past. We keep coming and going between Paris and London for our photoshoots and they always turn out so great ! This time we had planned one photoshoot in the morning at Kyoto Garden and it was just magical, stressless, quiet and it was a moment I really enjoyed. In the afternoon, we\’d planned on shooting a more grunge editorial in SoHo and what is awesome is that in all my trips to London, I\’d never been to SoHo ! While we changed the models and were traveling to the next location, we came across a doughnut shop ; Crosstown. 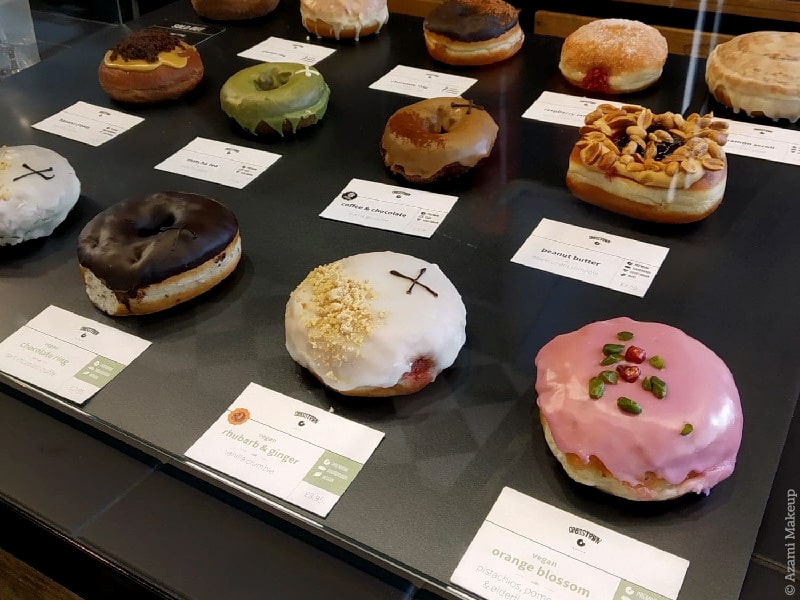 Now now, who am I to say no to donuts, especially when the photographer tells me she knows this place and they even make vegan donuts ? I still had some pounds left, that I had brought for makeup and ended up spending on food and nothing else. So I entered the shop that\’s located in 4, Broadswick Street just off Wardour Street (meaning it\’s very close to Oxford St) and I saw all those donuts lined up, waiting for me to pick one. And picking one was so hard ! You\’ve got those chocolate-y ones, one with Banana cream, some with raspberry, some with orange blossom…
Some of their flavors are vegan and that\’s definitely the type of vegan food you want to be trying as it\’s really, really tasty – I\’ve grabbed a bite of the Coconut/Lime donut and double, triple wow – even the kind of cream on the inside was astonishing. If you\’re completely vegan, there is a store offering the whole vegan range in Marylebone so that might be where you want to be heading so you have plenty of choices.
I know there were five or six vegan options in the CrossTown SoHo I visited. They do have some amazing flavors and I\’ve been able to try only two : one in the afternoon when we were shooting which is the stunning Blackcurrant and Peanut Butter one you can see in the pictures, and a Cinnamon Swirl one that I grabbed just before I left for Victoria Station to go back to France. 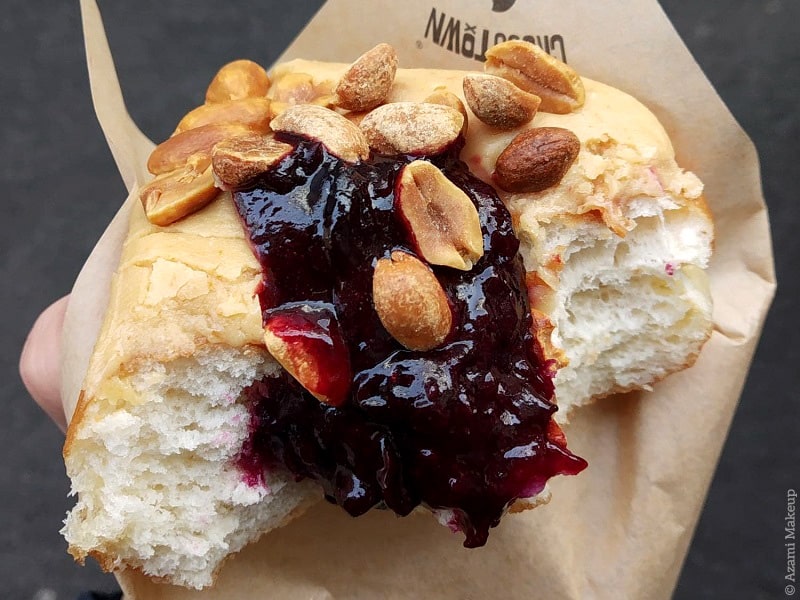 There are no words to describe just how tasty these donuts are. As I am writing, I\’m in my bed in France and my mouth is watering at the memory of the sweet acidity of the blackcurrant and the fullness of the salty peanut butter. The dough, let me tell you about the dough ! A real doughnut, filling like a brioche, the kind of donut you don\’t find at every corner. I\’m usually up for seconds but this time, I couldn\’t have swallowed another bite.

At first I did think it was a little expensive, £3.50 for my Blackcurrant + Peanut Butter donut but I was told that these are the prices in London and once I was finished with it, boy, did I think it was money well spent ! In the evening, when I came back for the Cinnamon Swirl one, I really enjoyed it as well but this one had a different texture, almost like a real brioche this time, with a bit of cinnamon inside and glazed with tasty sugar too !

I did enjoy the first one more as it had a taste of a real complete meal, but wow, I\’m going back to London in May for the IMATS and I will definitely get more of these babies – maybe even try the banana cream one too, this time !