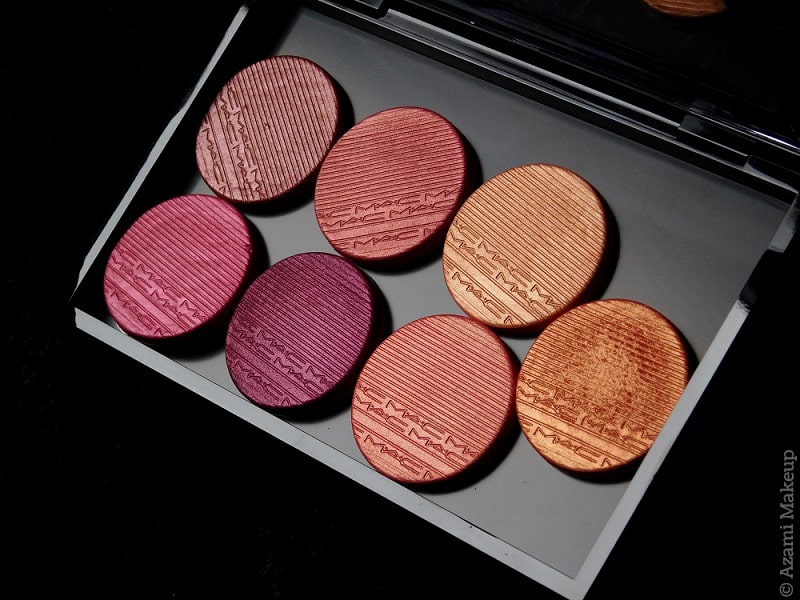 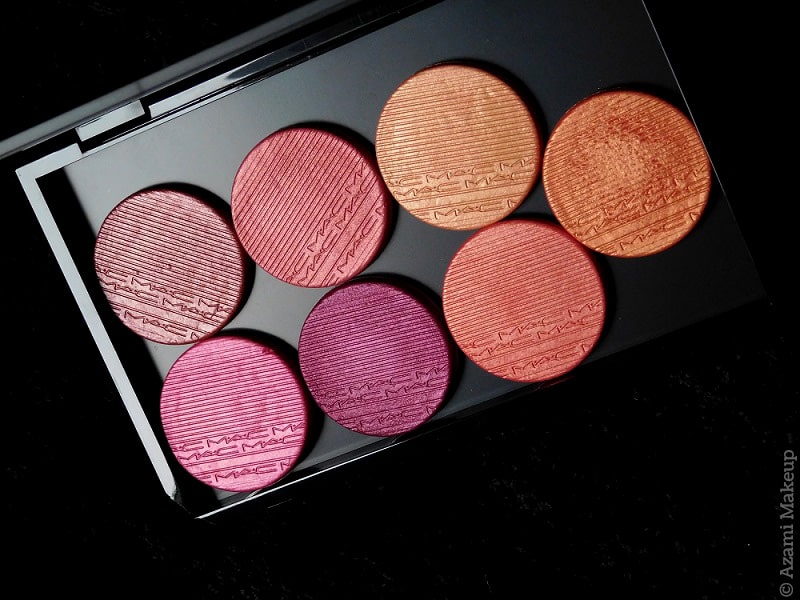 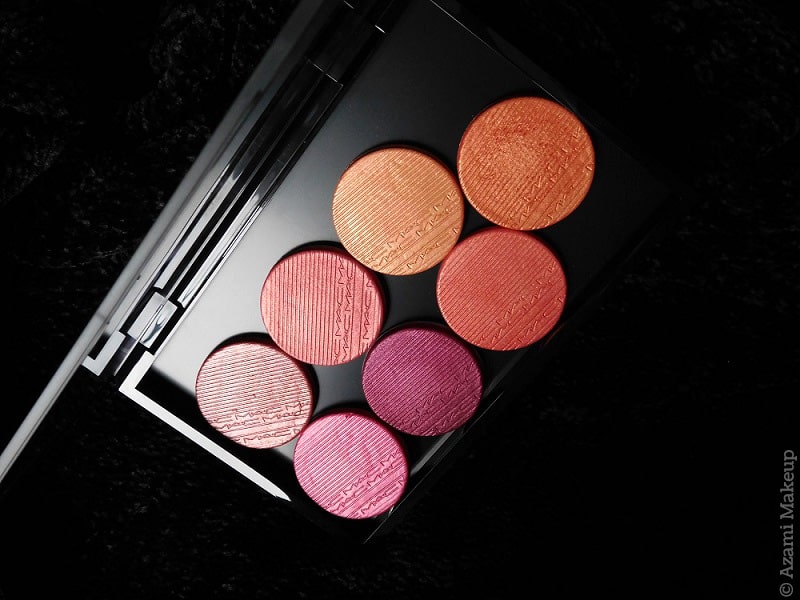 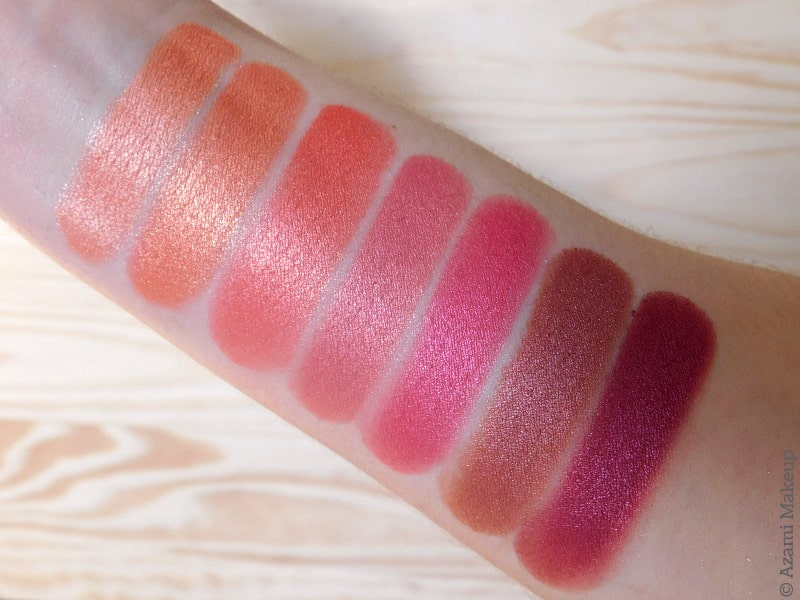 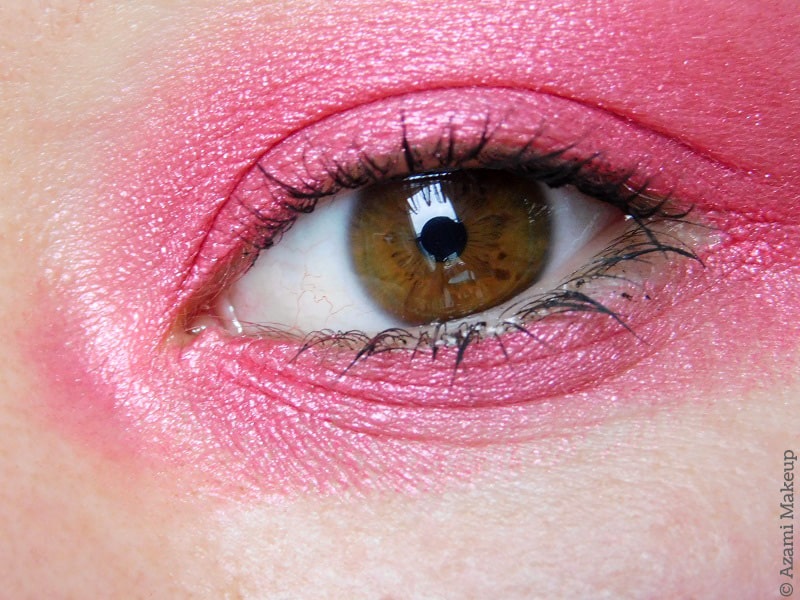 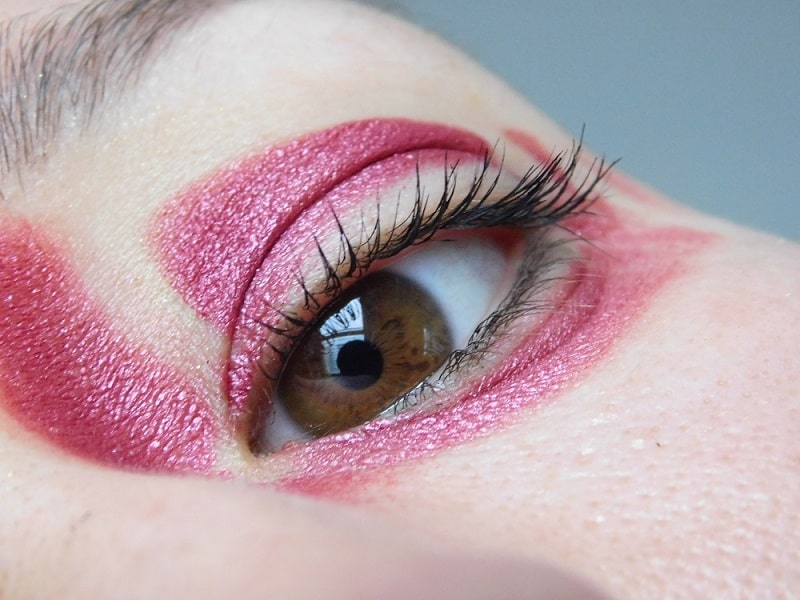 While I was writing this post, I listened to Roses by The Chainsmokers. Try it !
When I started working for M.A.C. back in November, the Extra Dimension highlighting blushes are one of the very first products I became crazy about. I was staring at them all the time, swatching them whenever I got the chance and guess where part of my first paycheck went ?

There are eleven shades in the Extra Dimension blush range and I\’ve got seven, from the left to the right on the swatches : Just Pinched, Telling Glow, Cheeky Bits, Sweets for my Sweet, Rosy Cheeks, Faux Sure and Wrapped Candy. I have left out four, Hard to Get, Hushed Tone, Fairly Precious and Into the Pink because I wasn\’t as crazy about the colors, had not room left in my M.A.C. Large palette and didn\’t want to make another. About every fain-skinned person can wear any of the ones I have but Cheeky Bits and Faux Sure look exceptionnally good on Middle-East, Arabic women and Wrapped Candy looks amazing on black skin – I\’m saying, as blushes.
They\’re described as silky smooth highlighting blushes that give a polished look and reflect the light and M.A.C. says they\’ll last for 6 hours on the skin. Each can be bought separately and they actually come in a black case as do the classic blushes, but there\’s no refill of these to put in a Z Palette. There\’s 4 grams in each which is quite a lot and they cost €28.50 in France which makes them the most expensive M.A.C. blushes along with the Mineralize blushes.

M.A.C. Cosmetics | My Opinion About the Extra Dimension Blushes

The first one I got as a welcoming gift at M.A.C. was Telling Glow and I love it so much, it\’s like a bright orange shade on a red base with a golden sheen. This one and Cheeky Bits, the orange one with an even redder base are my very favorite. But to be honest, they all look amazing on my fair skin (I\’m an NC20), even the purple Wrapped Candy when I apply it with a light hand ! I love the fact that I can apply them dry on my unpowdered skin and they won\’t make stains, they\’ll apply smoothly as they\’re like a mix between powder and cream. I can also use them wet and that makes my life so easy when I\’m late for work as I\’ll apply the same blush dry on my face and wet on my eyes with some Fix+ and bam, that makes a look ! On the first picture, I\’m wearing Rosy Cheeks and I\’m wearing Wrapped Candy on the second photo so you see how pigmented these can get wet ! Even if I don\’t set my foundation with powder, they last way more than 6 hours on my face which makes those babies a worthy investment in my opinion.
If you want to use these as a highlighter, you need to pack them on so there\’s only one blush I can actually wear as a highlighter, Just Pinched, but even then you can still kind of figure out it\’s a blush so you need to be careful with the placement. I\’d advise you to get one of the even lighter shades like Fairly Precious or Into the Pink if you\’re as fair-skinned as I am and if you want to use them as a highlighter.
► MORE M.A.C. GOODIES TO DISCOVER : M.A.C. In Monochrome | Lipglass & Blushes ◄
I\’ve been loving and using these Extra Dimension blushes ever since I brought them home and I\’ve got only one regret ; depotting them. These are not like the classic blushes which are pressed in a metallic pan ; there\’s only a white plastic grid under them that doesn\’t protect them anymore, which is why I think I\’m going to break them down (bye bye cute embossment…!) and press them in metallic pans. The fact is that as of today, I cannot use them on photoshoots because they can\’t leave home. If they do, I know for sure that they\’ll be broken by the time I get on the photoshoot set. If you\’re curious, just go to the nearest M.A.C. store and swatch them – don\’t be afraid when you see how metallic and pigmented they can get, for with a blush brush, you can get a super natural finish that looks stunning and colors that can double as great eyeshadows for the summer !
Have you ever seen those blushes at M.A.C. ? What blushes do you usually use ? x