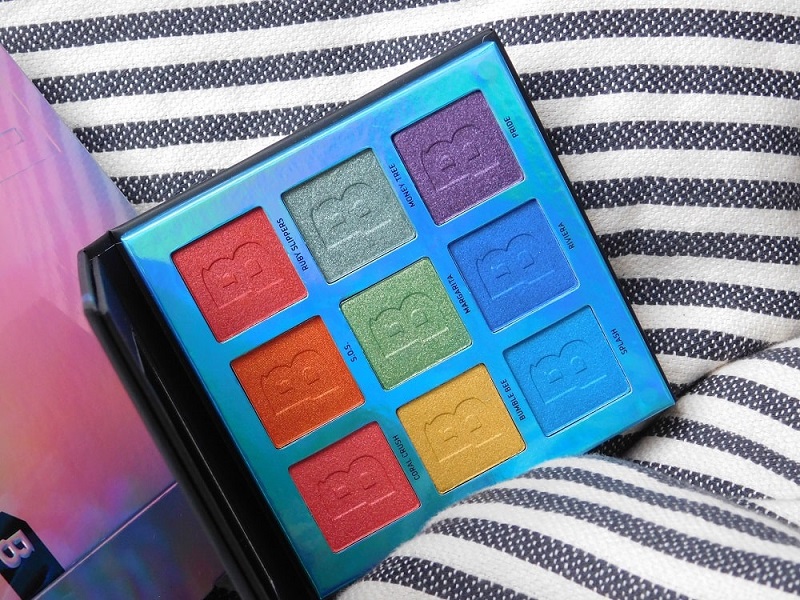 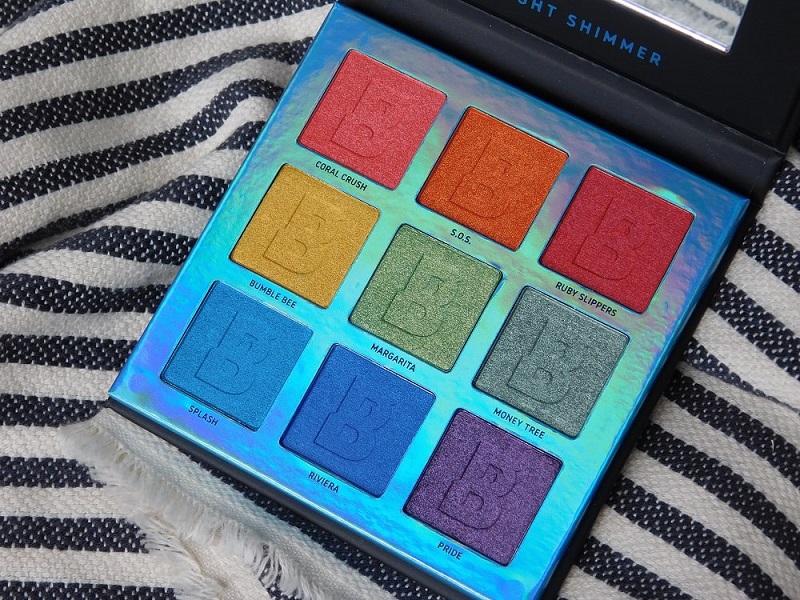 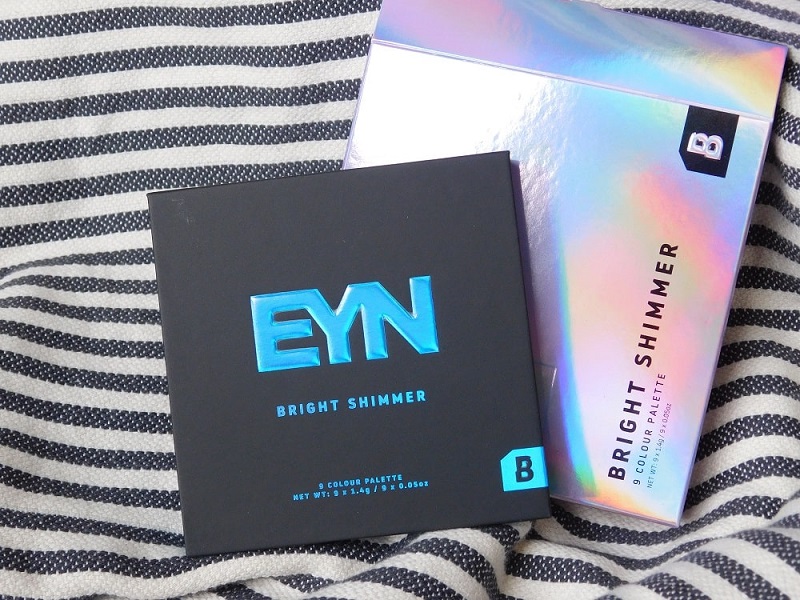 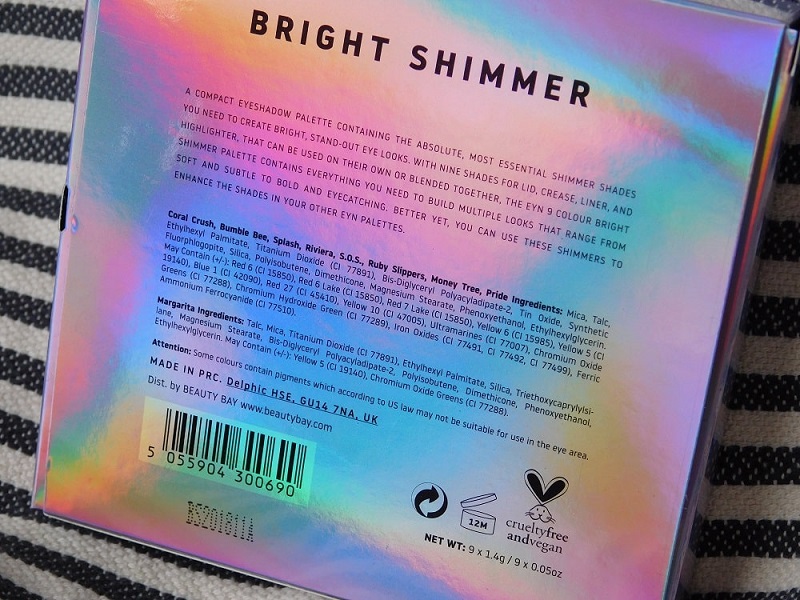 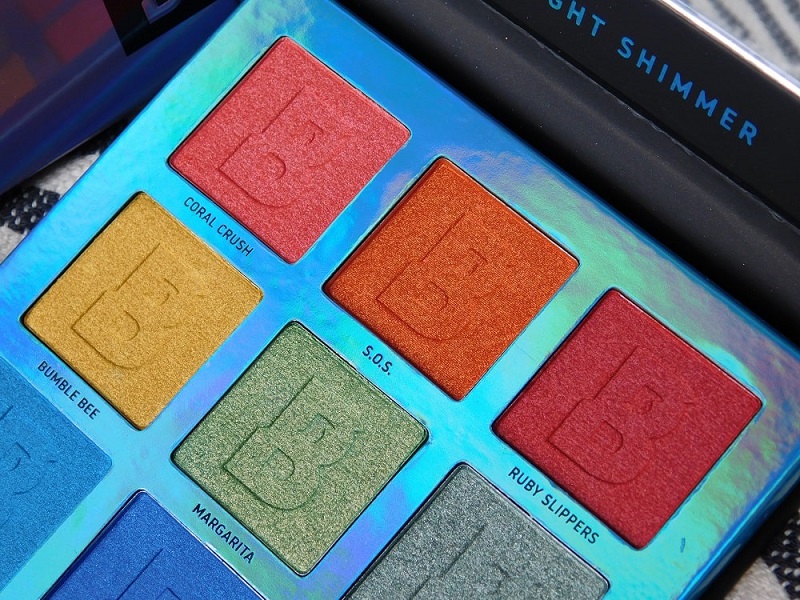 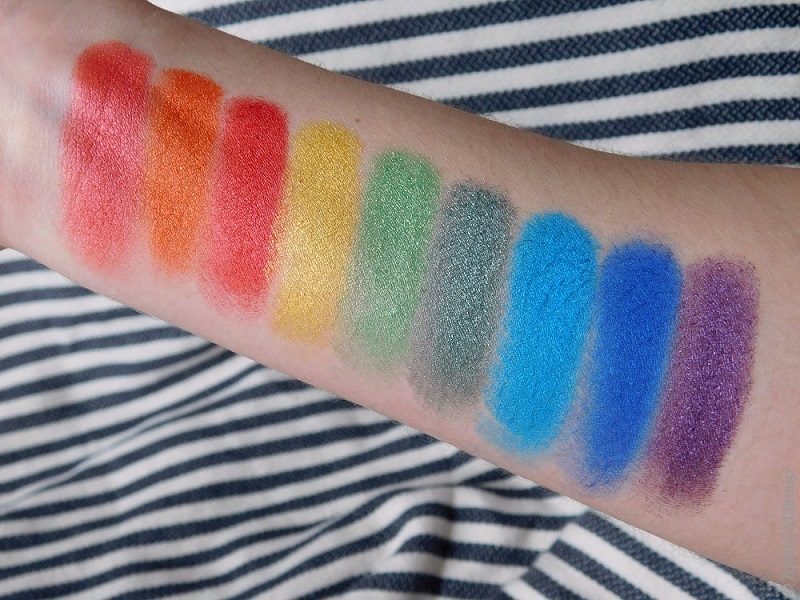 While I was writing this post, I listened to Angela by The Lumineers. Try it !

As soon as I saw the new BeautyBay EYN (stands for Everything You Need) palettes on their website, I placed my order(s). I had been after bright af eyeshadow palettes including mostly shimmery/metallic eyeshadows for some time since I already have the Morphe 35C Multicolor matte palette for all those matte colorful colors (whatever happened to this palette and the 35U ? I can\’t find them anywhere worth looking now, have they been discontinued ?! Hope not !).

I love just how compact this palette is, if you\’ve ever seen the Huda Beauty Obsessions palettes, this is just a tad bigger and you could really take it with you in your makeup bag everyday or for travels. I was really surprised at how \”heavy\” and how much more expensive than it is it feels and although I dislike the black and blue packaging that I feel didn\’t receive quite the aesthetic attention it could have to make it more beautiful, I can\’t say that it isn\’t perfectly assembled. Every palette is black, only the color of the lettering changes according to the range of the palette. They even found some room to fit quite a nice mirror inside the palette and I appreciate that because when I\’m doing a photoshoot, I like letting my models know what I\’m doing on their face. Still, I would have loved it if they\’d made the palettes holographic instead of the box \’cause I\’m going to throw the box away and my palette will still be basic. Oh well.
What I liked about this palette is the variety of colors ; there are four warm-toned colors and five cool-toned colors : one coral, one orange, one red, one true yellow, one apple green, one khaki dollar-toned color, one bright blue, one electric blue and one purple. There\’s something for everyone in this and at only €8.95 a pop (9 x 1.4 g eyeshadows) it is definitely a bargain since for the price of two palettes, you could not even have a M.A.C. single eyeshadow. I also really like that the name of the eyeshadows is printed on the packaging, as a blogger and makeup artist, not having a plastickey thingy with the name printed on it flying around the place is important. Also, what\’s cool is that the whole palette range is vegan and cruelty free and that is amazing for the price point !

BEAUTYBAY EVERYTHING YOU NEED | 9 BRIGHT SHIMMER PALETTE – My Opinion

Now, now, I said it was a bargain but when I first swatched and tried this palette I was like, \”Meeeh\”. I have got to say, given the reviews and comments on blogs and Instagram I was expecting even more pigmentation than what this palette offers. I\’m a Juvia\’s Place junkie, baby, so I\’m used to really buttery, pigmented pigment. What about this ? Well, the swatches aren\’t lying, the eyeshadows are indeed well pigmented when you swatch them. Well, not enough that I didn\’t have to swatch them two or three times to get a nice shape and the true color on my arm.
All the eyeshadows are really pigmented and buttery in this palette except for the two blues, Splash and Riviera – Riviera is the shitty eyeshadow in here, being all dry, almost no pigment at all and the least shimmery of all too. That is a bummer since I loved this and really wanted to use it often. If I want to use it, I\’ll have to use something creamy underneath and some Fix+ and my finger to apply it. What I\’m a bit disappointed about is that for instance, for a Morphe or Juvia\’s Place eyeshadow, I wouldn\’t have to wear a colored eye primer underneath, you know ? Like, the same color for the primer too. With those, if I want to have the true color, I have to wear a colored Paint Pot, a 3ina Cream Eyeshadow or a Kiko Longlasting Eyeshadow Stick and even use my finger to make the eyeshadows more popping and shimmery because they\’re good with a brush but so much better with a finger. That especially applies for the green Margarita, the coral Coral Crush and the yellow Bumble Bee. All in all it seems like almost all the shades in this palette and especially the lighter ones have a sheer side that I dislike – you know me, I love my swatch color to be full on the first swipe. There\’s a bit of fallout when applying them on my eyes but nothing major so that\’s cool.
► FURTHER READING : 3ina – The Color Eyeliners ◄
Lastly, those shimmers don\’t blend all that well, especially if you\’ve used Fix+ to apply them. They\’re more the kind of shimmers you wear in your cut crease look. I did say shimmer, not metallic because there\’s nothing metallic or foiled about these, not unless you wet them anyway. Luckily, the mattes from BeautyBay are really good, that\’s actually why everyone\’s been raving about the 42 Bright Matte palette and why it\’s out of stock. So you can totally make the mattes and shimmers work together.
All in all, that\’s a pretty good palette when you feel like some new bright shades to level up your makeup game and if you\’ve got a tenner to spare !
It\’s really not that expensive and I\’m in love with the four warm-toned shades and the shade Money Tree – on the website it looks like a greyish shade but it\’s exactly the shade of dollar bills, a one-of-the-kind color I\’ve never encountered before and that color only is worth the €8.95 I\’ve spent, especially since it applies like a charm ! I\’m harsh and maybe that\’s because I\’m a makeup professional and need stuff that\’s super efficient and works quickly on photoshoots but if you\’re starting in makeup, you\’ll definitely love this. And don\’t be mistaken, the shades are so beautiful that even if they require some more technique to work better, I\’ll still use them on photoshoots ! Be on the lookout for the reviews of the next palettes and makeup looks I\’ll create with this palette !
Have you ever tried the BeautyBay eyeshadow palettes ? What did you think ? x