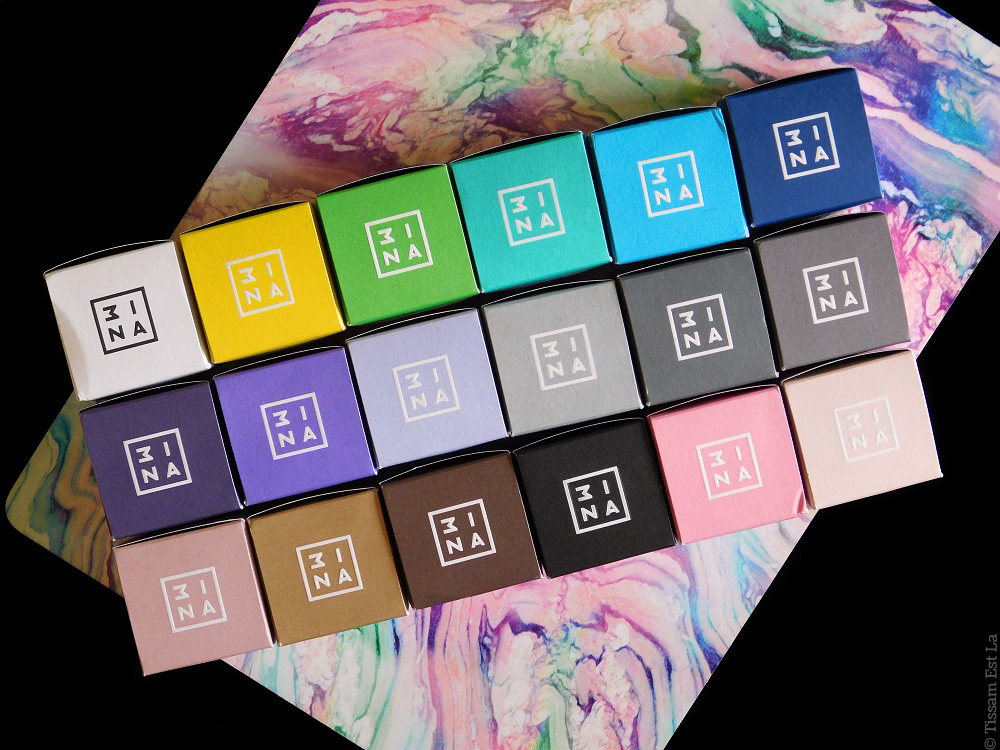 When I went to London with my little sis\’ in August 2016, we visited the first 3ina store in London, in Covent Garden (as I\’m writing there\’s also a 3ina stand in Selfridges) and I swatched much of what the brand had to offer. A wide, white store, magnificent, clean and full of colorful and high-end-looking makeup products.
Even though I was really interested by the pretty things, the lack of background and reviews about the brand deterred me from getting anything and since I was half-broke, I couldn\’t make a choice between all the products and ended up getting nothing at all – I\’m an all or nothing kind of girl. Back in France, I spent a lot of time on the 3ina e-shop but they only shipped to a few countries (obviously not France otherwise you\’d have heard of them from me much sooner).
The matter was closed but was brought up again when I was preparing my trip to London beginning of July and thought of going to the 3ina shop again. I was watching Harry Potter & The Half-Blood Prince (my favorite !), I was jotting down the addresses of the stores I wanted to go to and well… One thing led to another and bam, there I was on the 3ina website. And then, big surprise. The website ships to France. I was a few clicks away from getting the product I was most eager to get, the one which has gotten so many positive reviews on the few blogs it was reviewed. Me being my usual self, I got each color available. 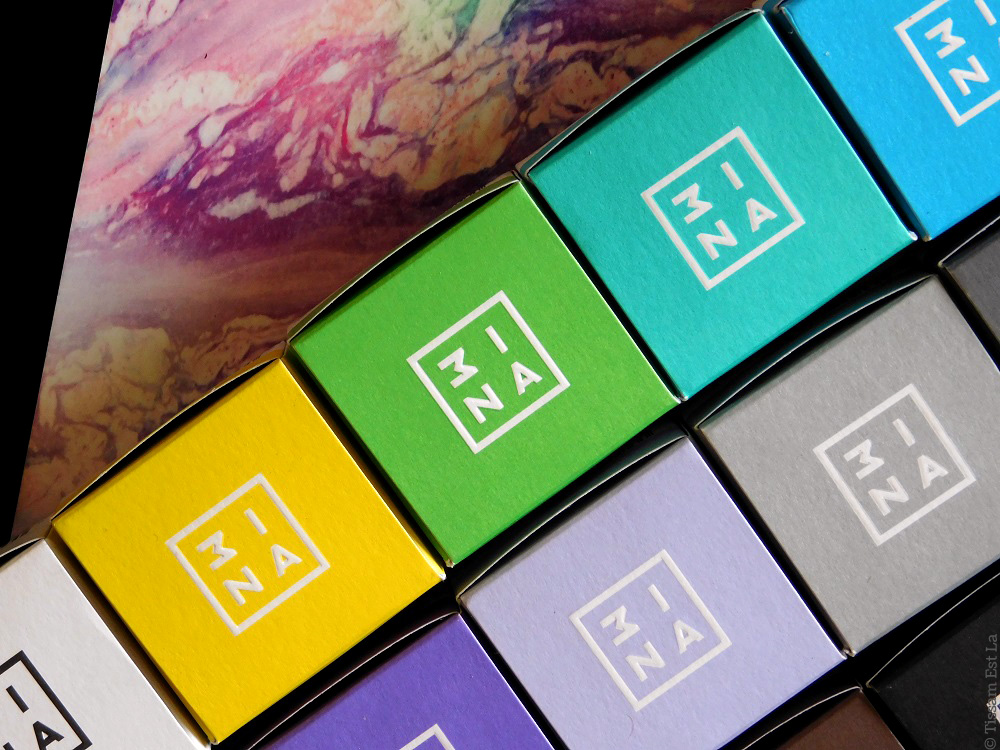 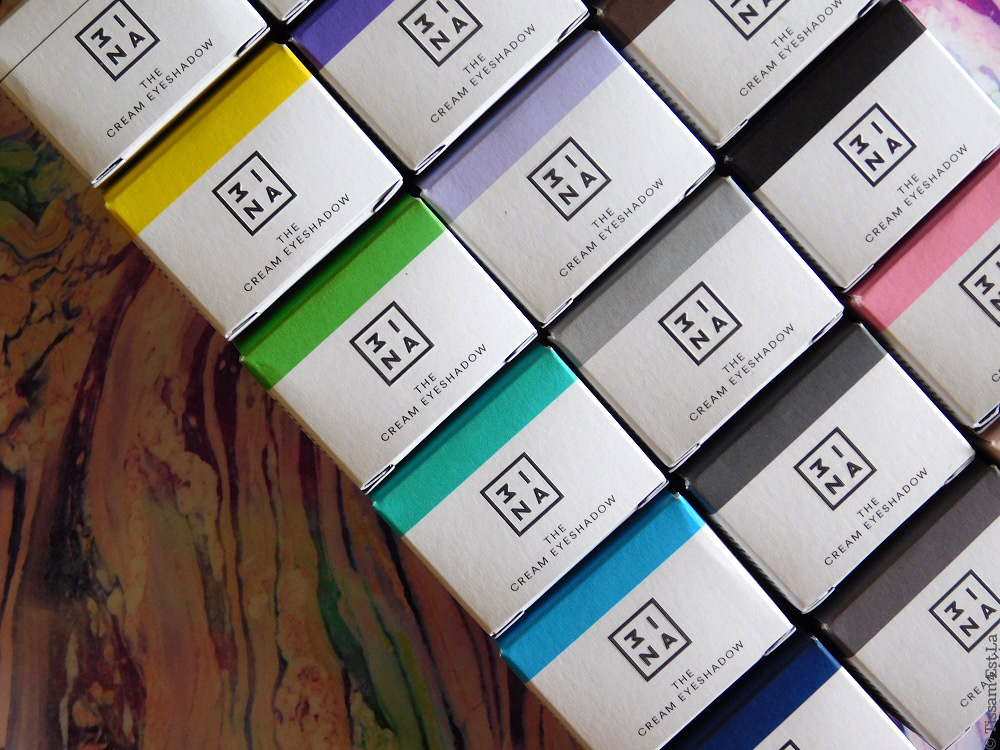 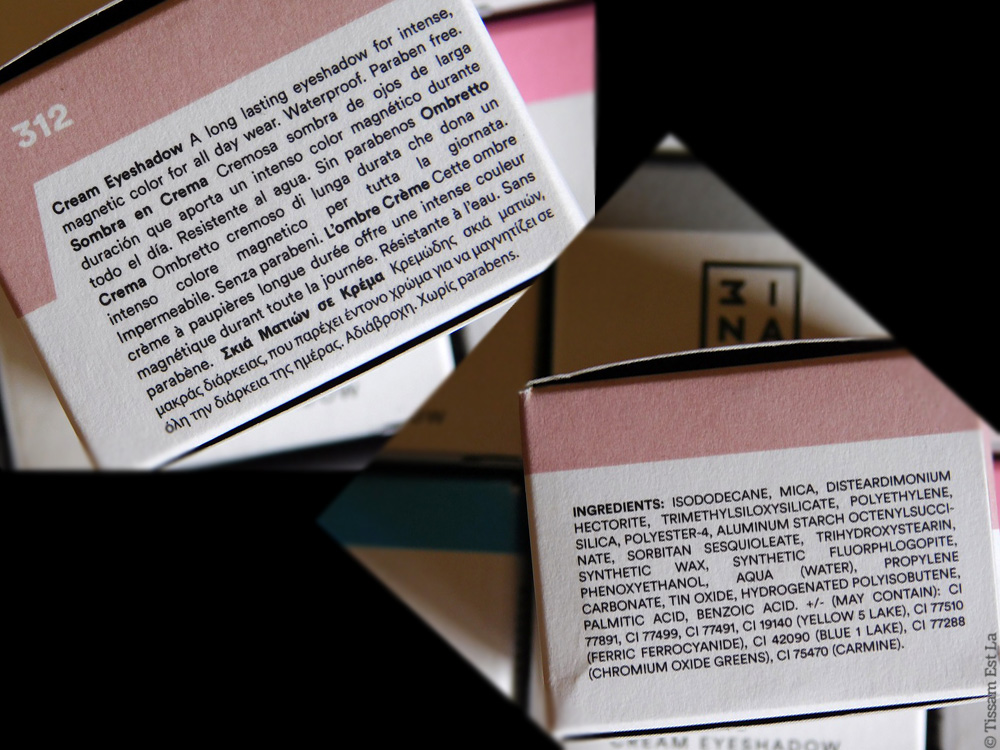 As I\’m diving into this review, I\’m growing more and more depressed – how am I ever going to manage getting you as excited about these products as I myself am without overfeeding you words and circumlocutions ? If I get too talkative, do forgive me – I find it always difficult to share my excitment over a new brand or new awesome products. I wasn\’t planning on getting this review about those *spoiler alert* genius 3ina cream eyeshadows up that soon but as I was working on my blogging planning it dawned on me that I couldn\’t procrastinate publishing it as I usually do.
I\’m not going to tell you much about the brand today ; that will be for some other soon-to-come post, a haul or a presentation of the 3ina bestsellers. Let\’s cut to the chase : 3ina (pronounced mee-nah with the 3 representing an M written sideways) is a Spanish brand born in February 2016 and is one of my current obsessions. For me like for the 3ina creators, color is an obsession as is daring to wear bold colors in your makeup looks. They try to abide by three words as a brand : bold, honest and fun. Let\’s add a wide range of products, honest prices and vivid, longlasting formulations and you can understand quite fast how I\’m literally obsessed with the brand… After this oh-so-long intro… Ladies and Gentlemen, the Cream Eyeshadows by 3ina. 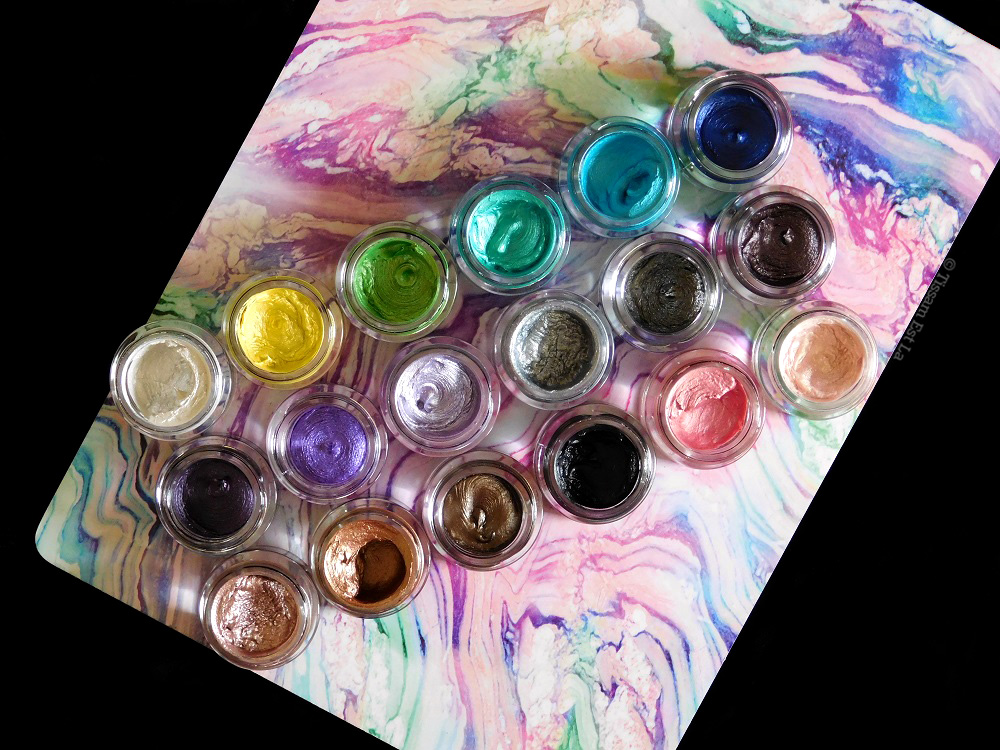 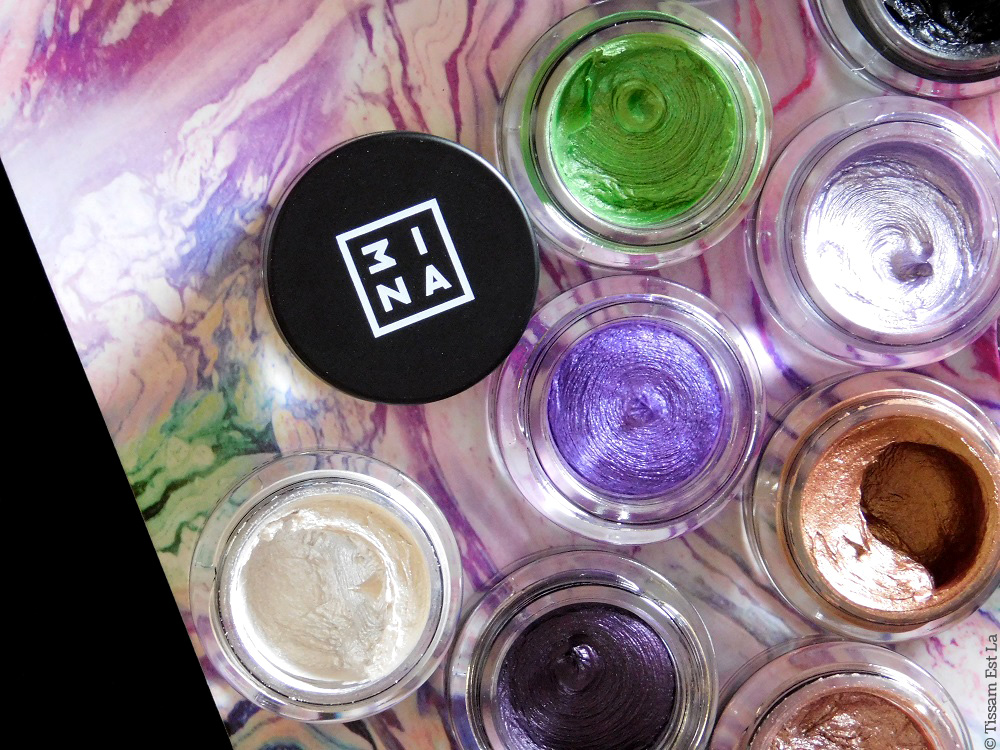 There\’s a reason why I got the cream eyeshadows (soberly named The Cream Eyeshadow, with that chic little \”the\” just before) directly off the 3ina website : they cost €8.95 there for us French girls whereas I would have paid £8.95 should I have bought them in the UK – a small difference that makes all the difference since it allowed me to spare enough money that I got something like one free cream eyeshadow by buying all 18 together. Of course I got all of them. Been wanting them for so long.

These cream eyeshadows are made in Italy and are paraben-free, cruelty-free and vegan (everything seems to be vegan in the brand aside from the lipsticks in which there\’s beeswax). They come in small white cardboard boxes with the top the same color as each eyeshadow. Still wondering if I should throw out those cute boxes on which are written the ingredients and the number of each eyeshadow on the side. A small transparent glass pot, a black plastic lid and a label on the bottom reminding me of which number I\’m using, that\’s minimalist, modern and chic.

Each of these Cream Eyeshadows have a metallic finish except the black one (number 315) which is more of a matte shade. My favorite shades are – of course ? – the most vivid ones, the yellow 301, the green 302, the turquoise 303 and the lavender 308. All the shades are very bright and light-catching though the most shy among us will still be able to find something they like with the array of bronze, grey and beige colors 3ina also carries within the range. 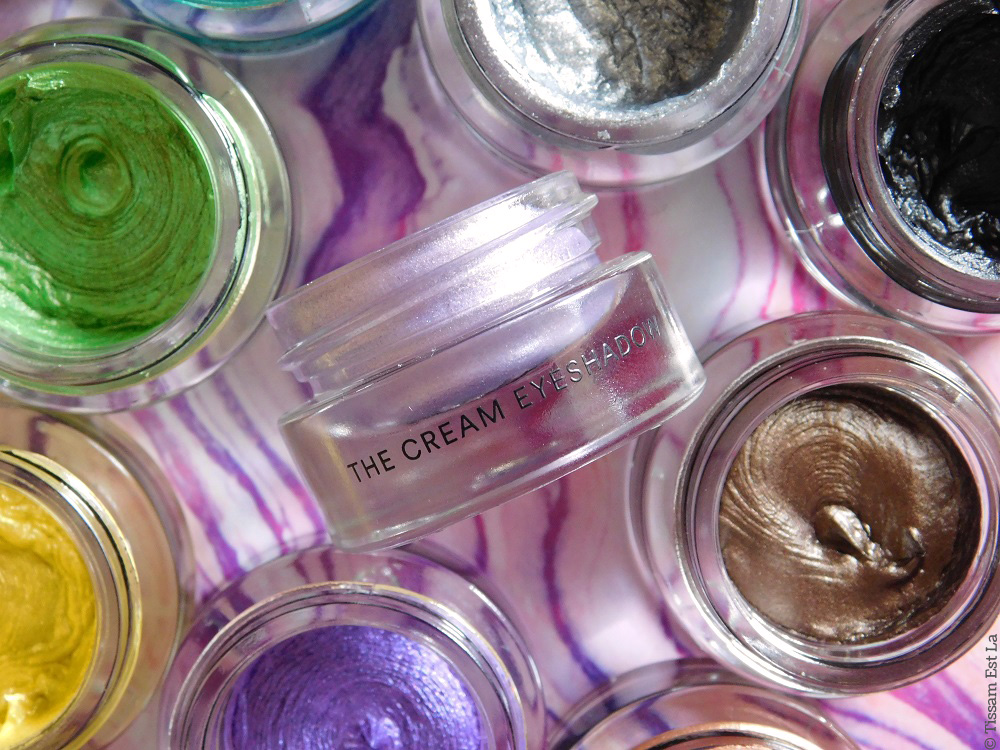 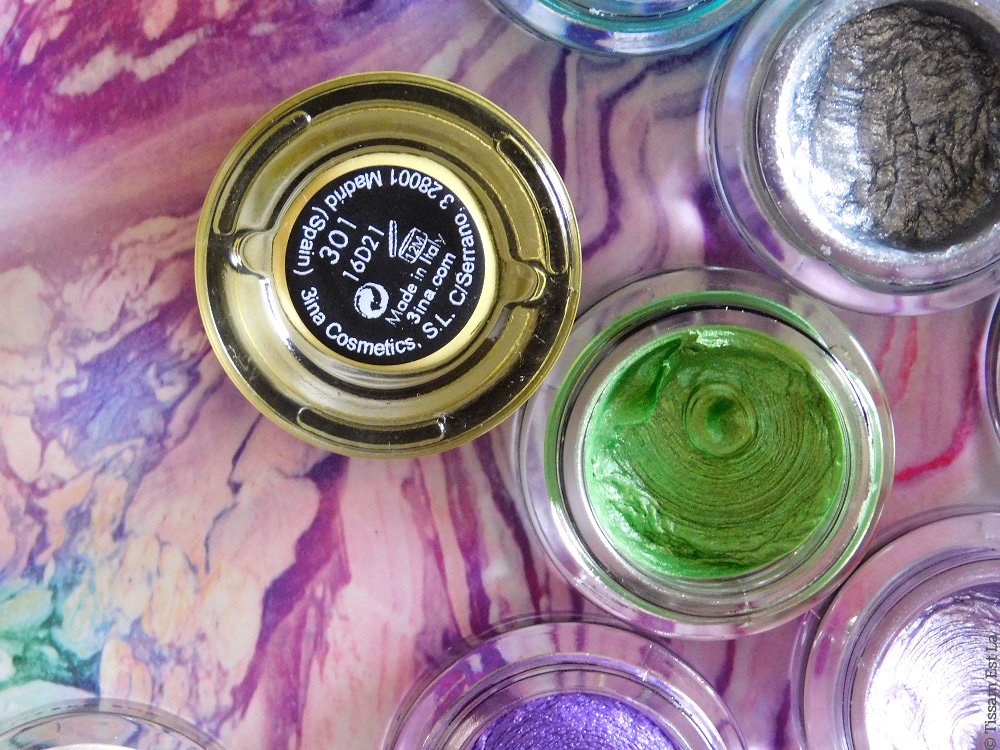 What I was most surprised about when I first used those eyeshadows is the really, really soft texture – far from being like a Color Tattoo or a Paint Pot, the texture makes me want to dig deeper and deeper into the eyeshadow just \’cause I feel like it (you can totally see how most have changed shape during the shipping which is a bit of a bummer all the more because those first 3ina purchases came unprotected in their box, no bubble wrap or anything). The pigmentation of these eyeshadows is so, so intense that you only need a teeny tiny bit for an eyelid.
When you apply the eyeshadow onto your lid, you have to work fast – they all dry down very quickly and you\’d better use the time wisely to blend out the edges should you need to do so. I only use a bit of eyeshadow at once and layer it to get a really intense result, especially when I use one of the most vivid shades but careful there : you don\’t want to make an eyeshadow sandwich – you\’ll get an uneven result. While I\’m at it, it\’s not that easy nor pretty to use one of these as a liner when you\’ve already applied another as an eyeshadow underneath – still going on about that layering thing – I rather use them as eyeliners on a powder eyeshadow or even on naked eyelids (that black one as an eyeliner is dope…). 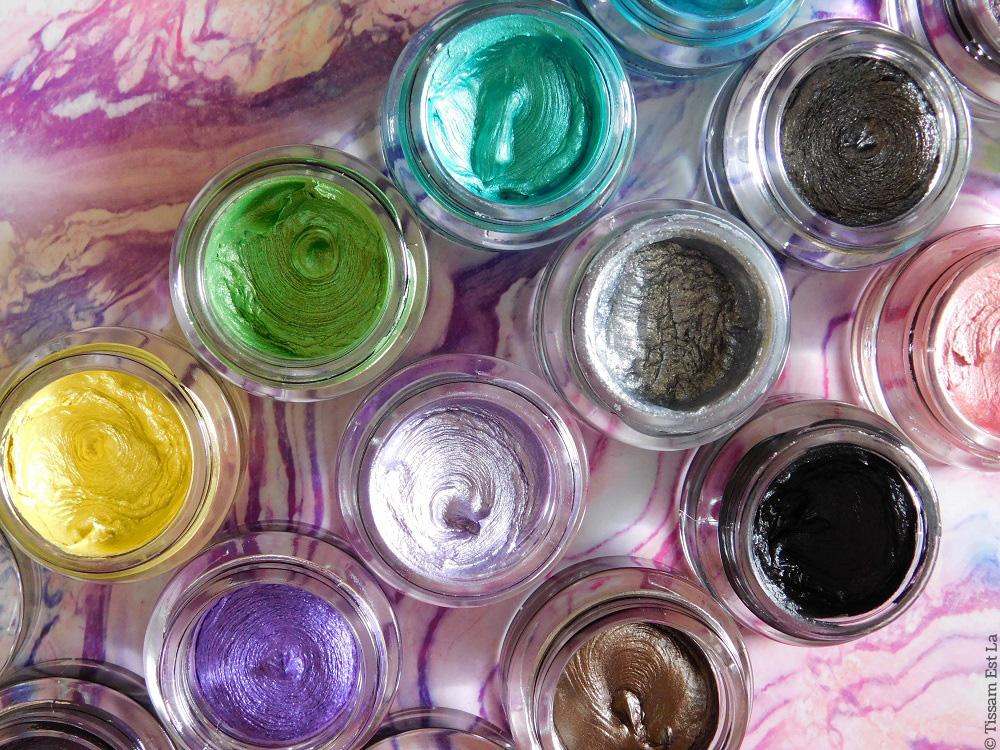 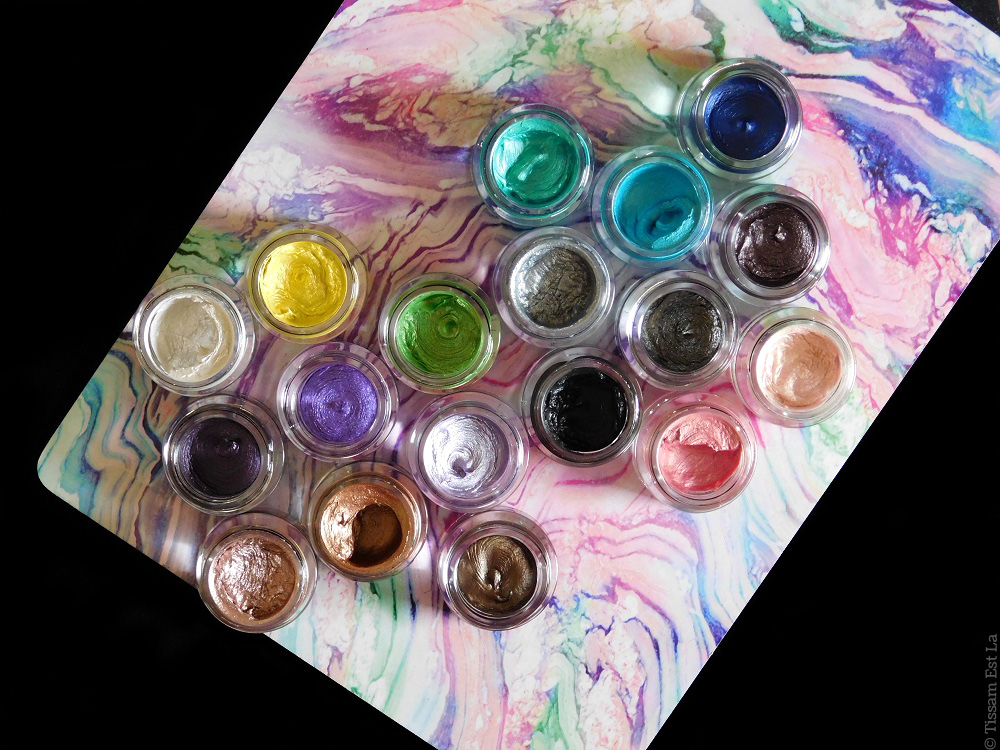 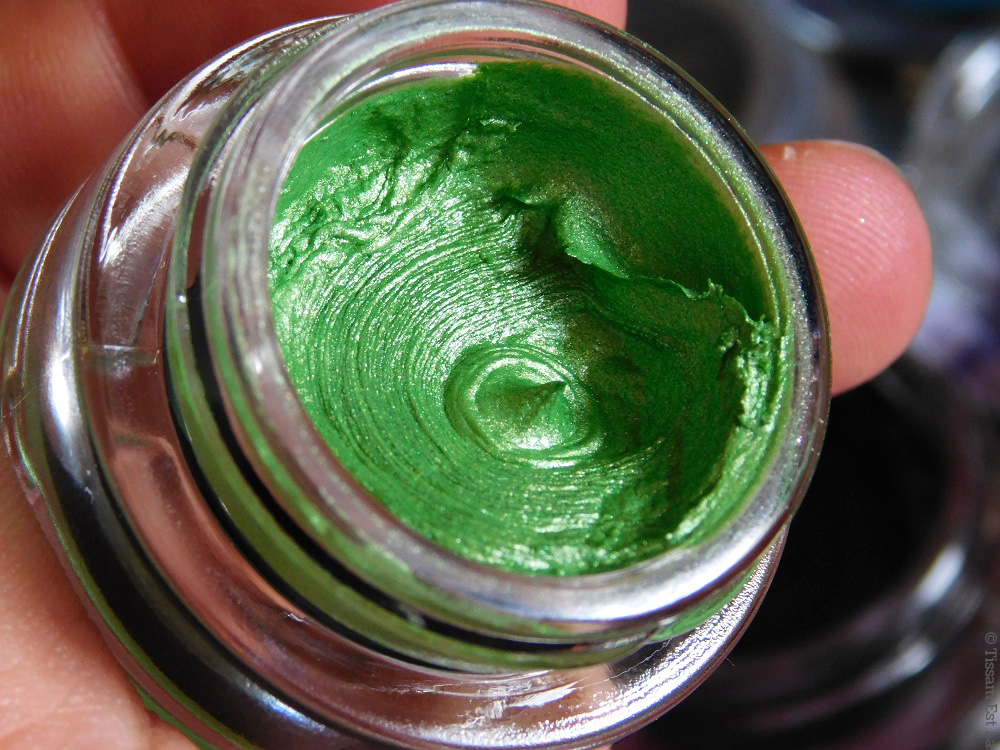 These are longer-lasting than any cream eyeshadow I\’ve tried till now. They said they\’re waterproof, they told the truth. No need for an eye primer, a powder or whatever under them – they won\’t budge an inch – like, ever – even on my oily lids. You\’ll need some really strong, oil-based makeup remover or even pure oil to remove them and you\’ll still need to work your way through the eyeshadow. Can you just take a moment and imagine me trying to erase the swatches of all 18 eyeshadows off my forearm…? I still had remains of eyeshadow for two days after that.
I\’m no super cream eyeshadow sucker – I mean, I love this format but always end up liking powder eyeshadows better because I\’m more able with powders. Well, I\’m happy to say the 3ina Cream Eyeshadows, being so affordable and easy to use, have changed my mind. Only need a few more shades like a vivid orange, a bright red,… What do you mean, I never have enough ? Do you know the brand 3ina and their Cream Eyeshadows ? What are you favorite shades ? Let\’s meet again on Sunday for a makeup look based on the Action Glow & Highlights palettes, those 3ina Cream Eyeshadows and maybe some other product… In the meantime, do subscribe to my newsletter so you don\’t miss out on any more reviews and makeup looks and follow me on my social media ! 😉
SHOP THESE BABES !
– Swatches of the 3ina Waterproof Cream Eyeshadows – Shades 300 to 317 – 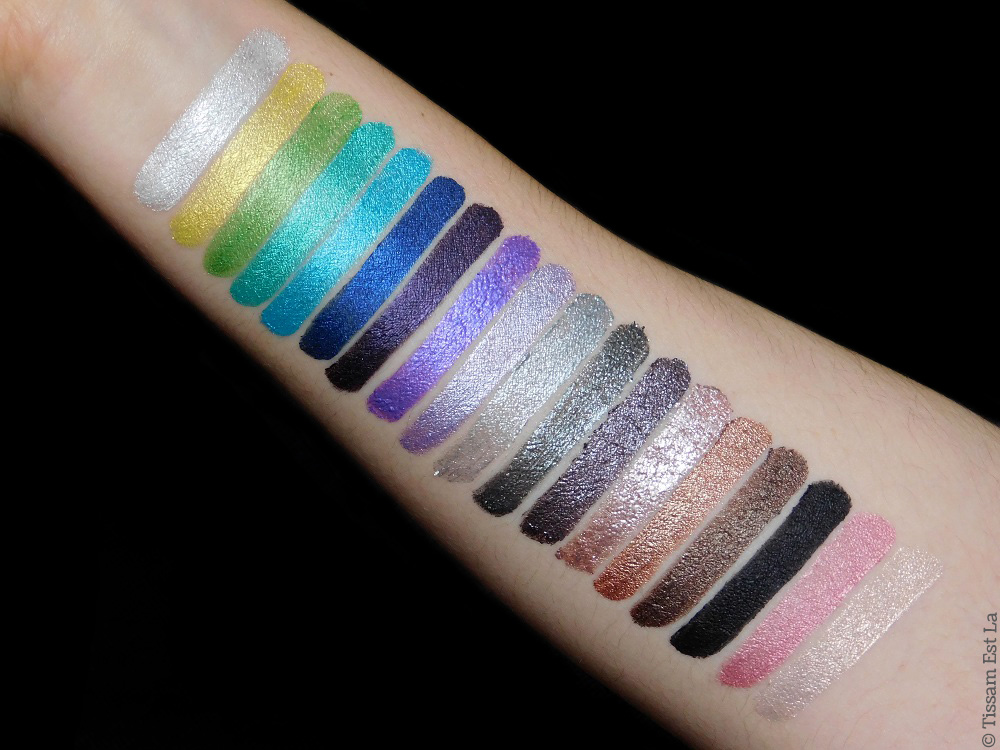