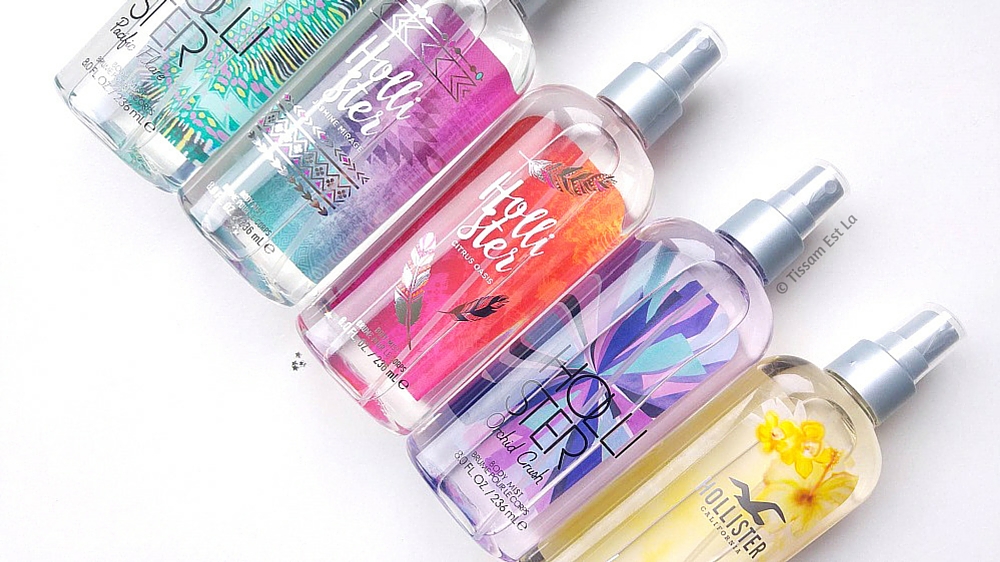 I\’m running a lil behind on my body mists reviews : when it comes to these 5 I\’m showing you today, most of them have been released about 2 months ago at the very least. It\’s always the same when it comes to body sprays, perfumes and body lotions : I want to take time to try out each fragrance at least a few times, then I start using other products and I forget to talk about them. But today\’s the first day of summer (and the sky\’s blue at last) so let me take you for the second time on a sweet summery trip to Hollister\’s bodycare universe. For the first trip to the permanent line of body mists, you\’re welcome here.
Hollister\’s Bodycare Line
I love Hollister\’s bodycare products : their body mists, body lotions and shower gels all smell amazing. I love their low prices so much too that I am not planning in getting a perfume of theirs as of now though I\’d love to.
Be on the lookout : Hollister often has great sales and sometimes even free shipping combined with their special offers for a few days. Lately they\’ve been having a Buy 2 Get 2 Free offer on all bodycare products (body mists, body lotions and shower gels). As a consequence you\’ll pay €26 for 4 products or €6.50 one product when they\’re usually €13 apiece. 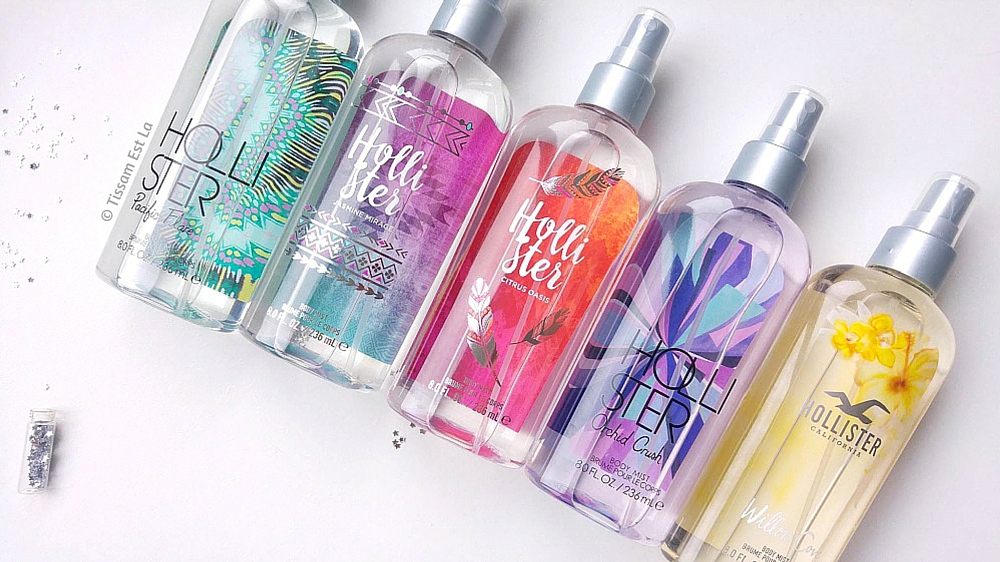 Pacific Flare & Orchid Crush
I missed the Orchid Crush body mist the first time they had it (I hate missing the Hollister body mists, I\’ve missed the Winter Daydream one last winter and I\’m still thinking about it) but fortunately they had a restock. Meanwhile, I had bought it on Vinted for a fraction of the price and brand new. 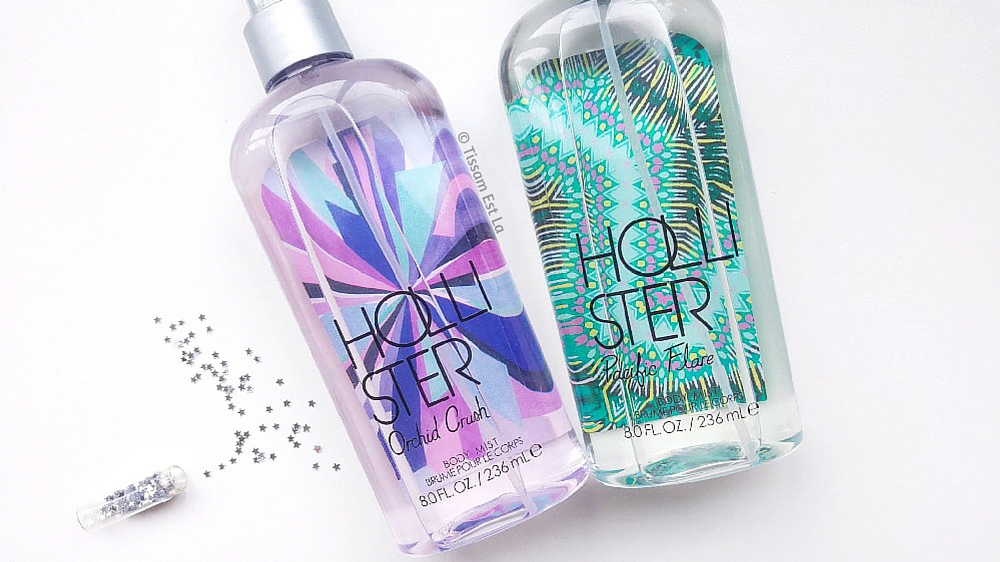 Those two body mists are part of an original concept : they can be worn separately and smell very good on their own but they can also be combined to create a new floral & fruity fragrance which is pretty interesting. 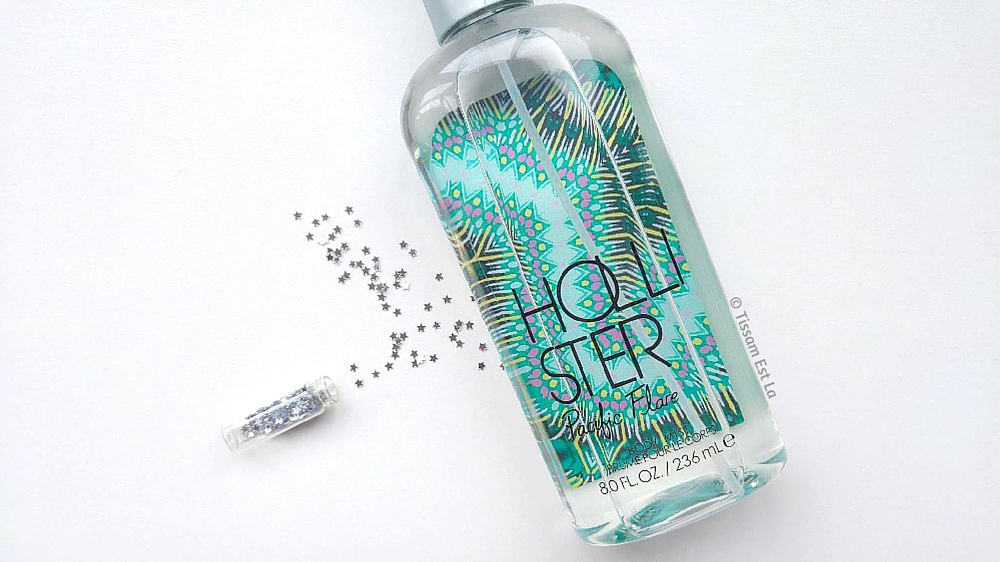 Pacific Flare is a mix of watery pear, mandarin and a touch of raspberry sugar. It is tangy and really fruity. 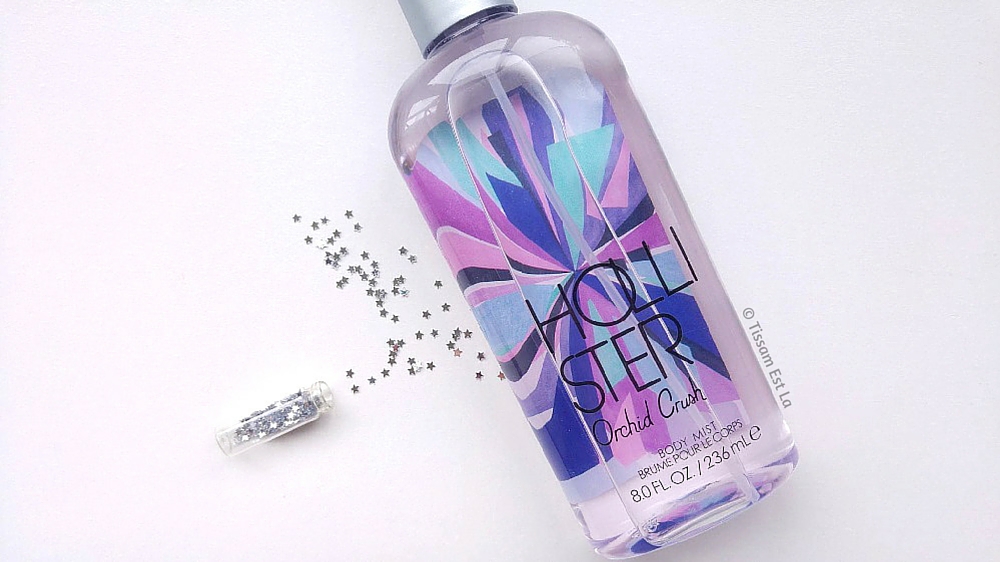 Orchid Crush is a mix of wisteria, musk and a hint of sheer jasmine. Where is the orchid I\’ve been promised ? I\’ve looked up on the Internet if orchid and wisteria were the same thing but I haven\’t found anything saying so. The scent is really flowery and feminine, still it\’s not a grandmother-like scent. I like it but I think I\’ll wear it mostly with Pacific Flare because I\’m not a big fan of pure flowery fragrances.
Citrus Oasis & Jasmine Mirage 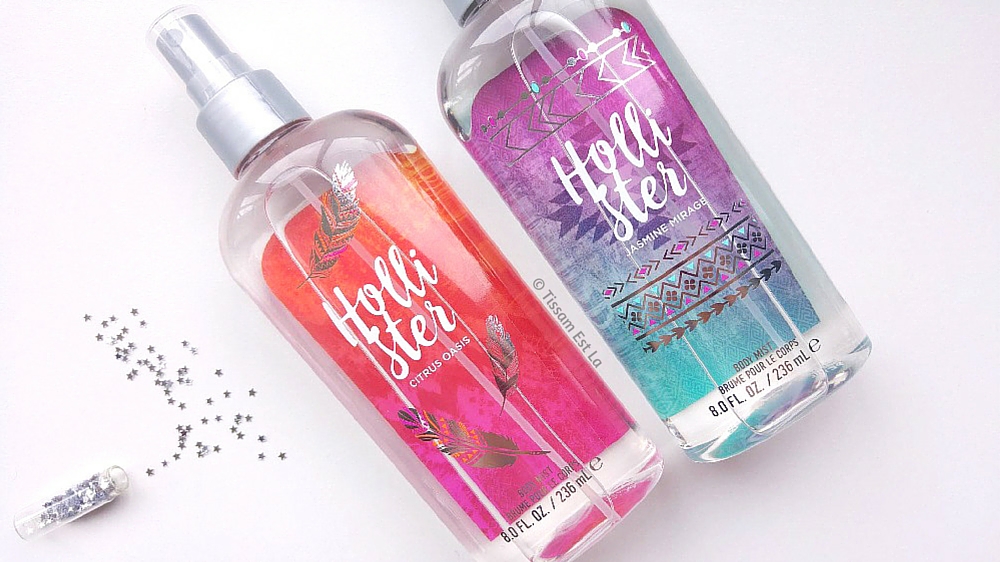 Citrus Oasis is aptly named, a mix of grapefruit, peony and amber. I liked this one the least when I first smelled all the mists of my parcel but it\’s actually one of my big faves. Citruses, freshness, that\’s all new for my nose which is used to the really warm vanilla and amber scents of my Equivalenza body mists I keep wearing lately. Perfect for the summertime. 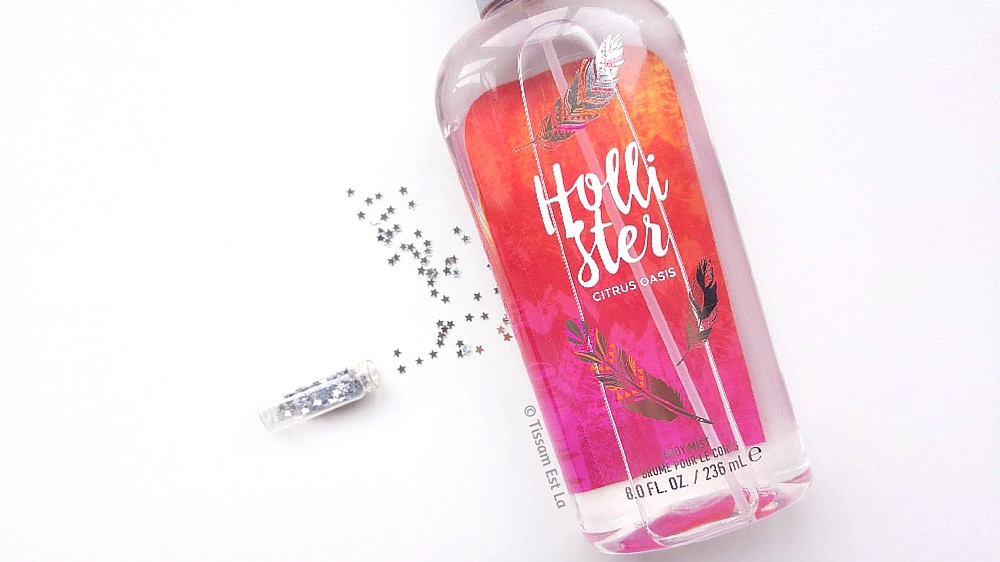 Jasmine Mirage is one of the longest lasting body mists out of the 5. I still don\’t really know what jasmine smells like but this mix of lily, jasmine and vanilla is perfect. It\’s feminine, light but still strong : I strongly recommend you get it (and isn\’t this bottle a jewel ?!) because it\’s not a fragrance you\’re used to finding all the time like vanilla-like fragrances for instance. 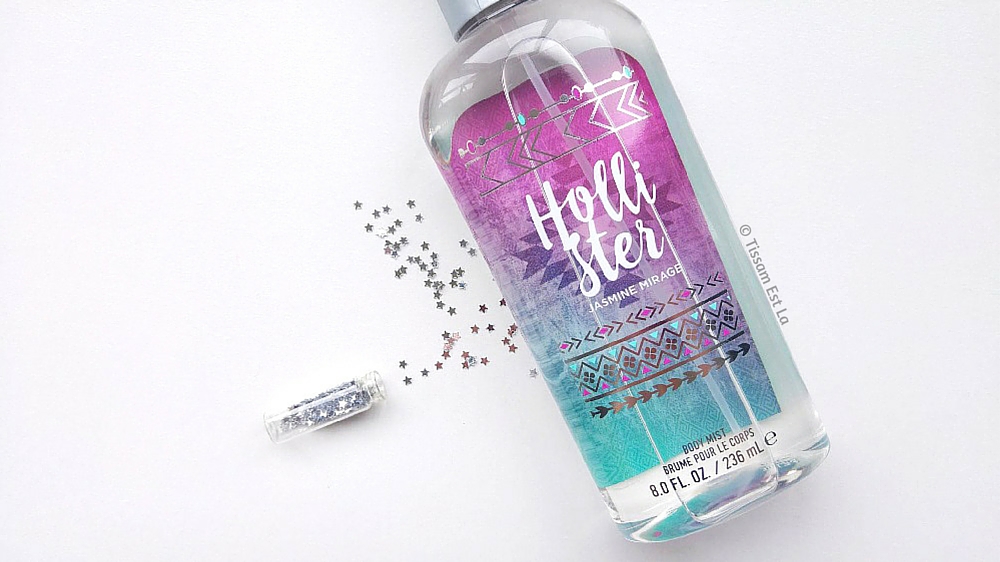 On the website, it\’s never said that those two body mists are a duo ; however I am under the impression they release two body mists at a time. These two have the same kind of ethnic, boho design (my favorite among the ten Hollister body mists I own) with silvery items, feathers, ethnic patterns on a gradient background. See, Orchid Crush and Pacific Flare also have the same design going on between them that looks a bit like a firework with the same font too.
As for the last one, Willow Cove, it has the same design as the other five permanent body mists you can still find online. Maybe that\’s not really important but it helps people figure out which Hollister body mist is permanent and which is Short Run so I think that\’s pretty interesting to know anyway.
Willow Cove 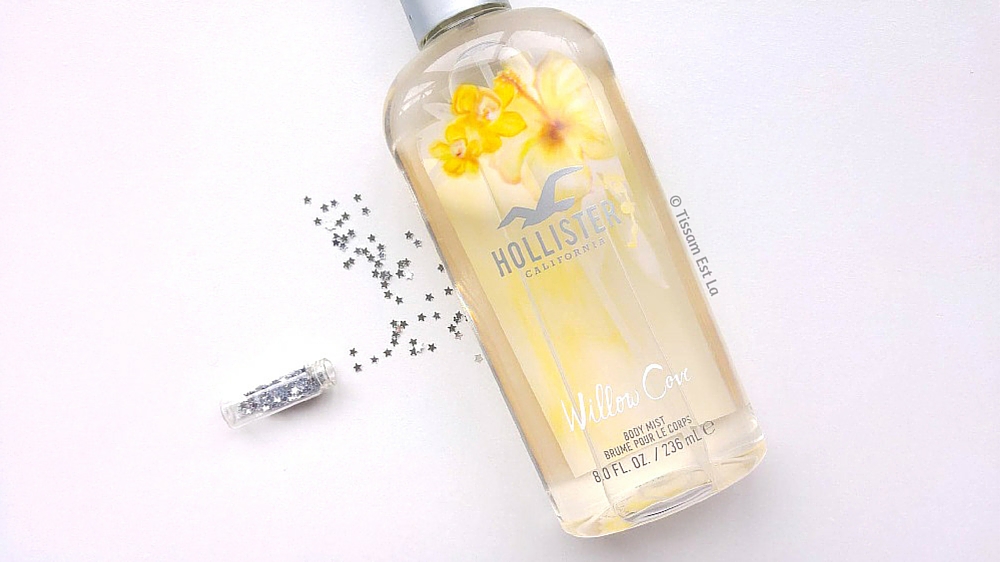 A mix of coconut water, wild orchid and vanilla beans. I can easily smell a touch of flower, also the coconut water on a background of paradise island vanilla. We\’re pretty far from the cozy vanilla/cake scent of my baby Equivalenza body mist ; we\’re rather close to a smooth creamy vanilla that makes me think of vahines with flowers in their hair, vintage leather flip-flops in California, piña colada and friendship wristbands. You get it, this is a perfect body mist for anytime of the day, not too overpowering and a must-have for this summer.
That\’s the only one out of the 5 that isn\’t a Short Run body mist so I guess it\’s a new addition to the permanent range as I hinted above. 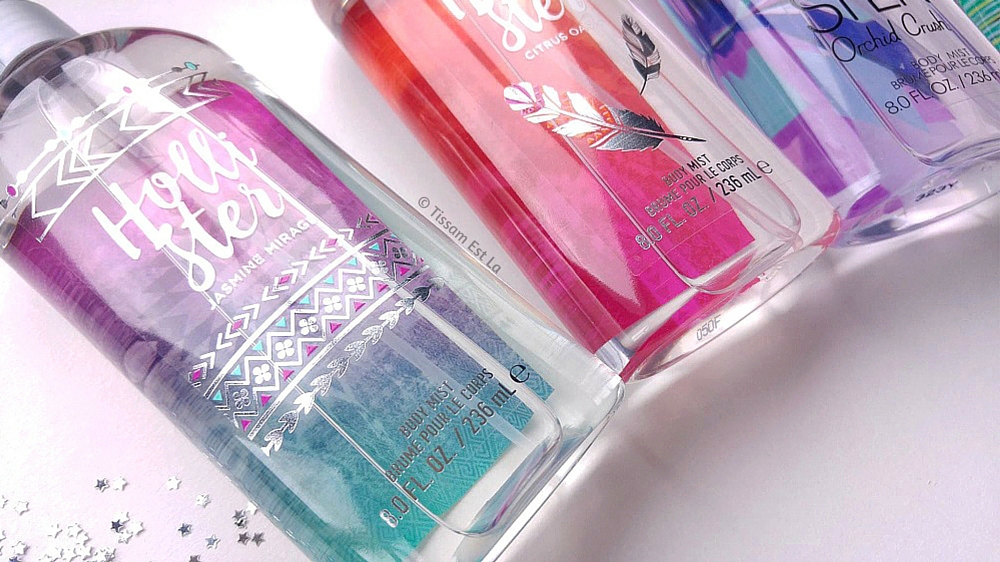 Out of the five, Jasmine Mirage and Willow Cove seem to be the longest lasting, at least on my skin. Orchid Crush & Pacific Flare are long lasting too, but last even longer when they\’re splashed together. Anyway they all last between 3 to 5 hours on my skin and fade away gradually. I\’m a big fan of Jasmine Mirage and Willow Cove, really feminine scents and also of the designs that take me California Dreamin\’ everytime, with every new Hollister product… 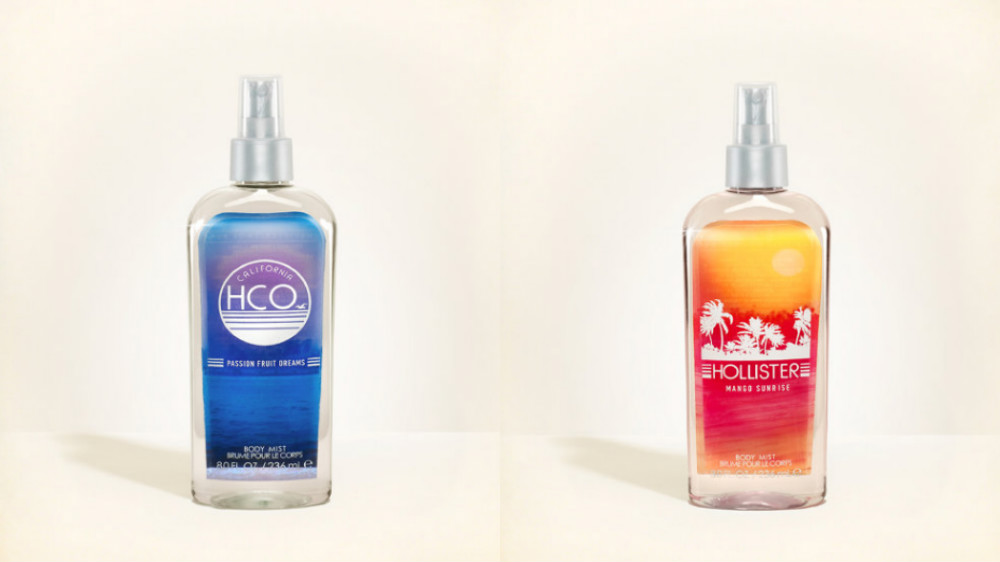 What led me to write this review quicker than I would have done otherwise is the release of two new Hollister Body mists : Passion Fruit Dreams and Mango Sunrise. Two beautiful summery body mists I got with the Buy 2 Get 2 Free promotion and I\’ll try to review really soon after I get them.
If you have missed some of the products, no worries, I seem to understand that Hollister often runs out of stock when it comes to bodycare (like with Orchid Crush or even the Crescent Bay body lotion) and restocks it some time after. Just be on the lookout and jump on the mists when you spot them ! 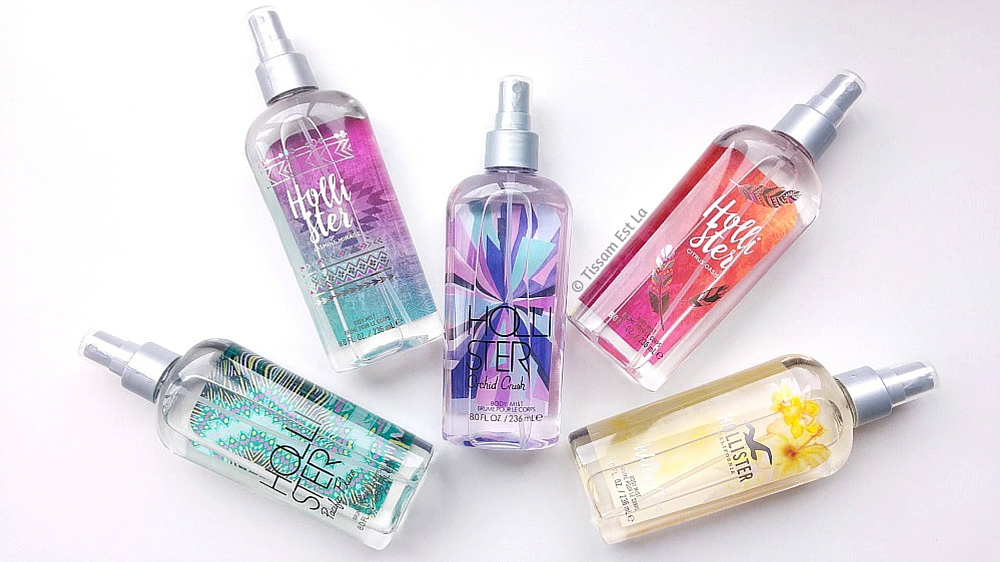 Do you know the Hollister bodycare products ? What do you think of them ?