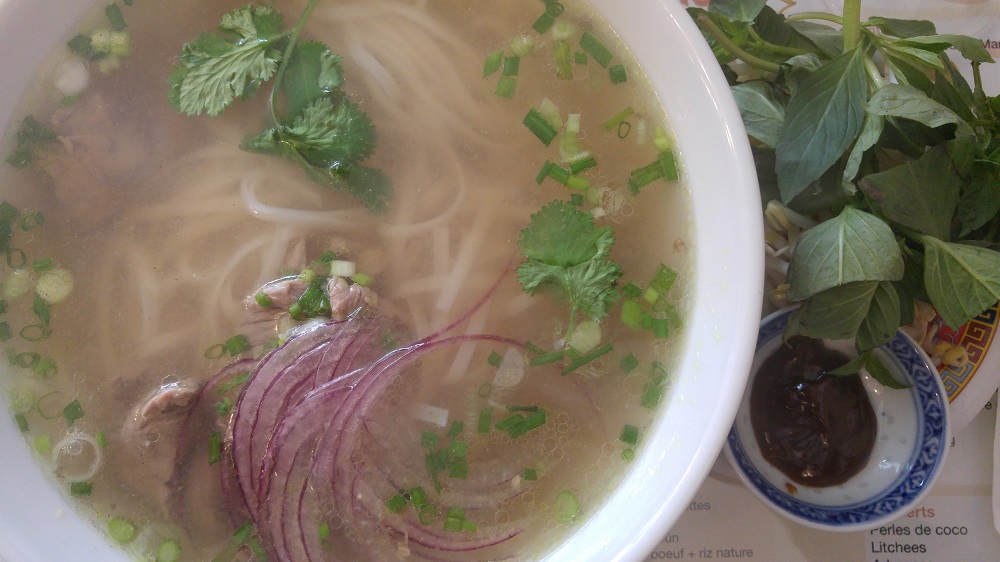 Several months ago, I published an article about the halal Asian restaurant Saveur d\’Asie that is in the rue Général de Gaulle near Les Halles. I have not translated this article in which I wrote about their Shrimp and Chicken nems and their delicious bo bun but I guess you can still drool over the pictures !
Today, I\’ve chosen to talk about the famous Pho soup that has drawn me to the restaurant in the first place, their ravioli soup and their spring rolls.
I had a hard time choosing what dishes to show you – just know that I already have in mind to introduce two other dishes from this restaurant soon… 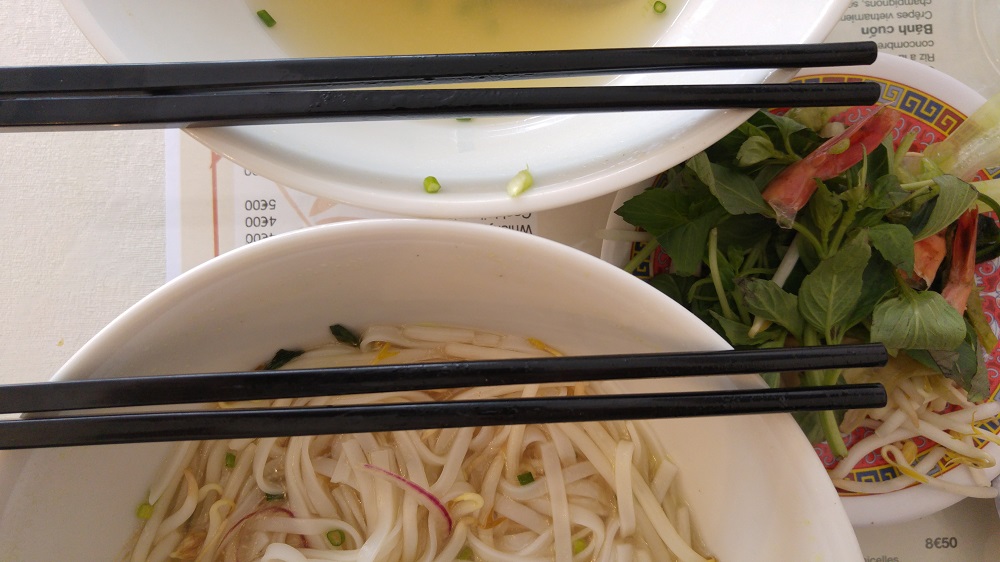 The Saveur d\’Asie restaurant : Introduction
You might be a first-timer on my blog so I\’m going to tell you a bit about the restaurant before moving on to the dishes. The outside of the restaurant has this authentic feel to it. It is quite small and can seat about 20 diners. Actually, most tables are full at certain hours of the day which is why you\’d better book a table. However you can still come and enjoy a great meal without booking first ! It\’s all about the time you get there and to be honest the food is so delicious that no one wants to wait ! The decoration is of Asian inspiration : it\’s cute and refreshing and though it\’s a small place, I feel very good when I go and eat there. I eat in this restaurant so often that it\’s almost like my canteen or so we like to joke with my friend ! Sometimes, if you\’ve got the right seat (one of those from the table in the picture above), you can see the cook using wooden sticks to prepare the dishes for her clients as if she were cooking for herself. She does that so naturally, she just makes you want to come back and wins your trust ! 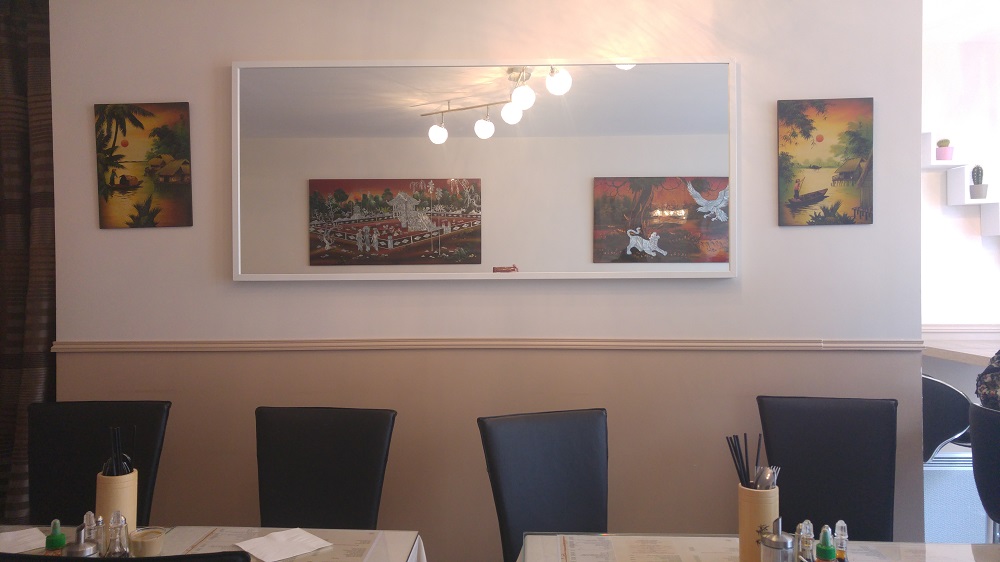 You hungry ? Let\’s get to it !
Spring rolls
When I was much, much younger my mom used to bring me back spring rolls several times a week because she knew I loved them so much. I overdosed on spring rolls, got disgusted and never ate one again – until I did in Saveur d\’Asie.
We chose to take one just to try it out. Yes, we\’re actually trying out every dish in the restaurant. Be aware that there\’s pork in some of the dishes but you can ask for your dish to be without pork. Sometimes this meat is the basis of a dish so it\’s pretty problematic but the waiter is amazing and easygoing : if you don\’t want something in your plate they won\’t include it (while being always very smily and lovely). 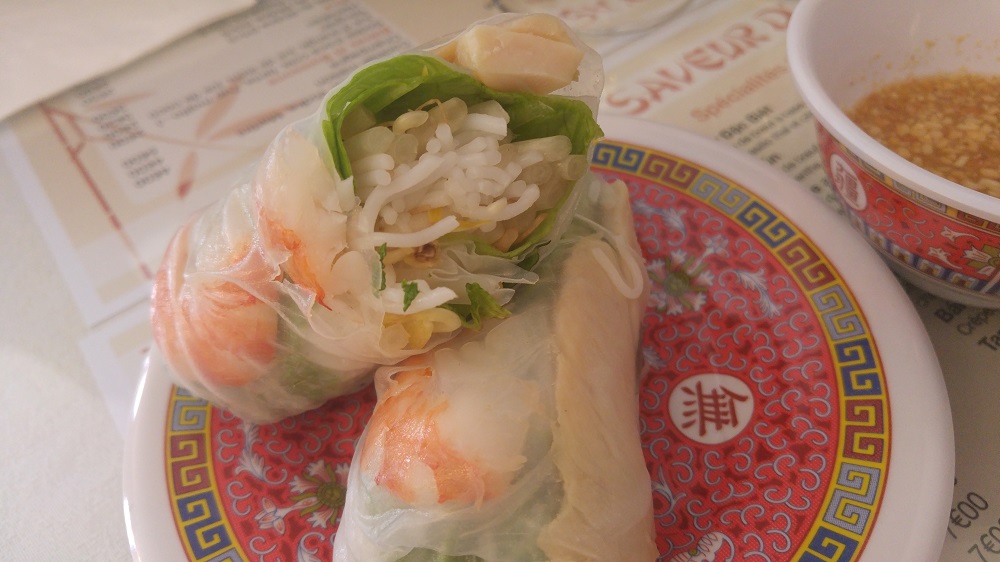 Spring rolls are €2.70 apiece if you choose to eat in the restaurant and I seem to recall they\’re about €1 cheaper if you get them as a takeout. There\’s rice vermicelli in them, salad, mint leaves, soya, shrimp and halal chicken as well as chunks of peanut. 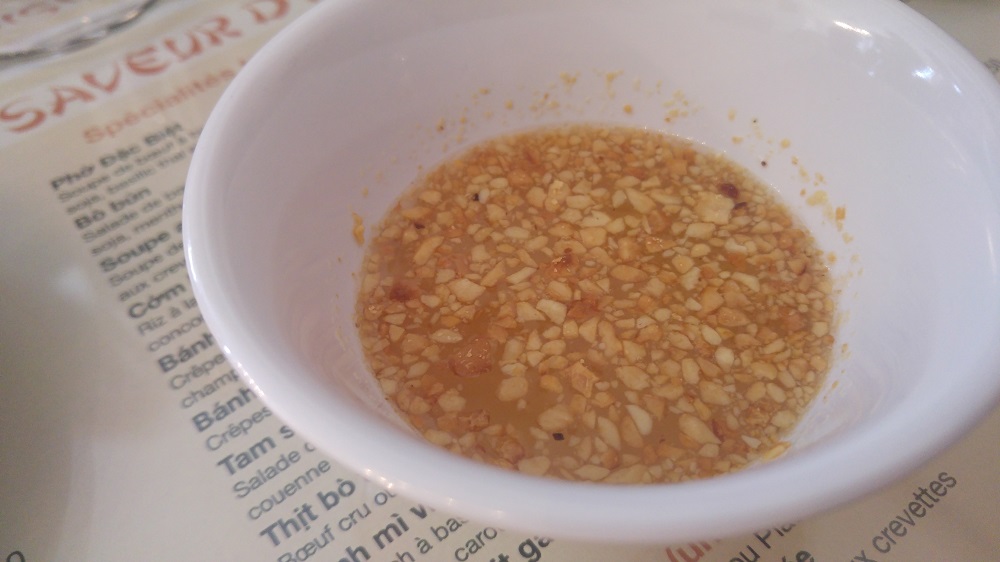 There are also chunks of peanut in the sauce in which you dip your spring rolls. I was disgusted by spring rolls, I\’m not anymore since I tasted the ones from Saveur d\’Asie !
The Pho Soup
That\’s the dish that brought me to Saveur d\’Asie in the first place : there\’s no other restaurant in Troyes that has Pho soup in the menu and even if it included it, it wouldn\’t be halal. The pho soup is a popular dish in Viet Nam and I think that several Asian countries have their own way of fixing it. Many think that the pho comes from the French \”pot-au-feu\” and well, I don\’t know much about that so if you do, feel free to contact me and explain the origin of this delicious noodle soup. 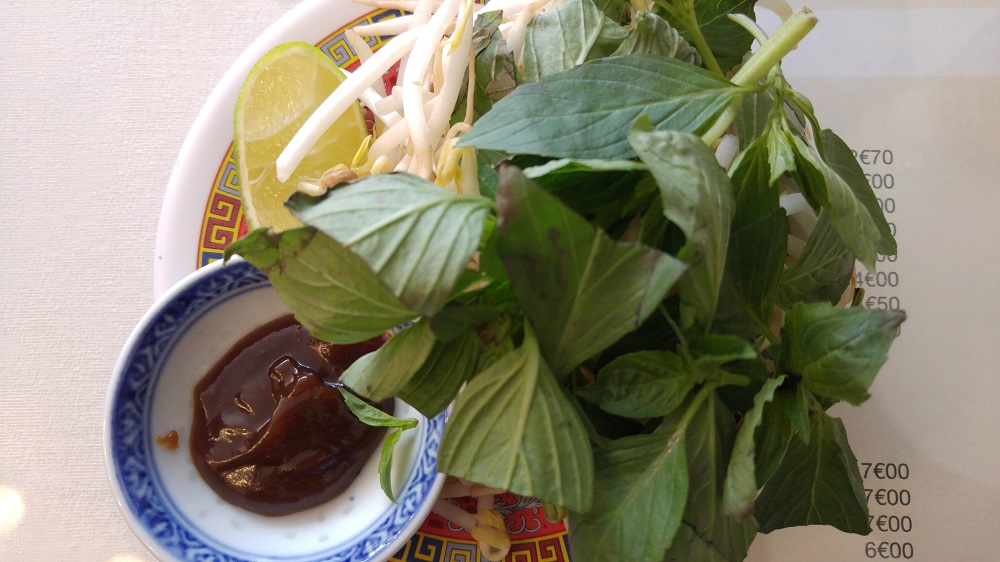 In the pho, there are rice noodles, onion and coriander. The broth is made with meat stewed during hours, originally during days. I\’ve tried and tried to make this soup but mine has never tasted like the one from Saveur d\’Asie. I think this kind of recipe is passed down from one generation to the next and I don\’t want to get a recipe from the Internet from fear it just wouldn\’t be as good. The recipes passed down from one generation to the next in my family are more like tajine or meloui so I think I\’ll just keep eating the fabulous Pho soups of this restaurant. 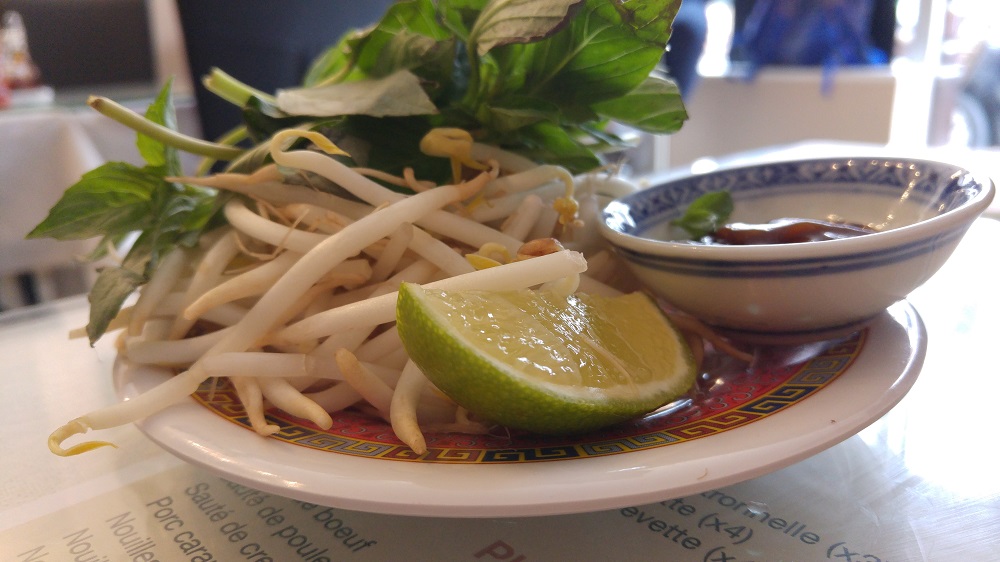 With the huge bowl of soup, they bring you a plate with a few ingredients that you add in the bowl : lime, basil, soya and oyster sauce. If you don\’t like one of them, just don\’t add it, it\’s that easy.
All you have to do is mix everything in this noodle rice and meat soup. It\’s just so wonderful and tasty ! If you don\’t like gelatinous meat or tripes, tell the waiter. They won\’t put these pieces of meat in your bowl, only extremely tender pieces that cook in the broth, in your bowl. 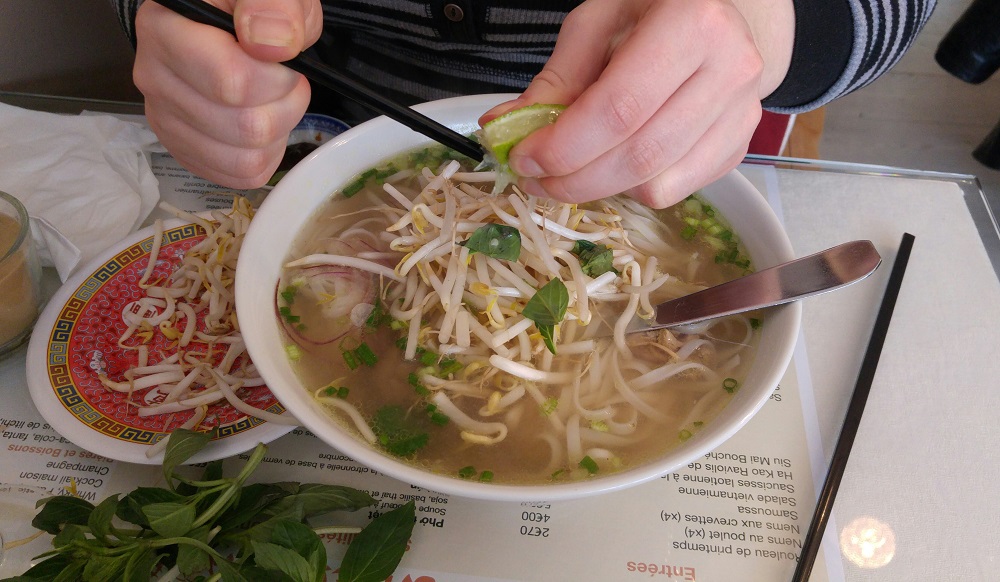 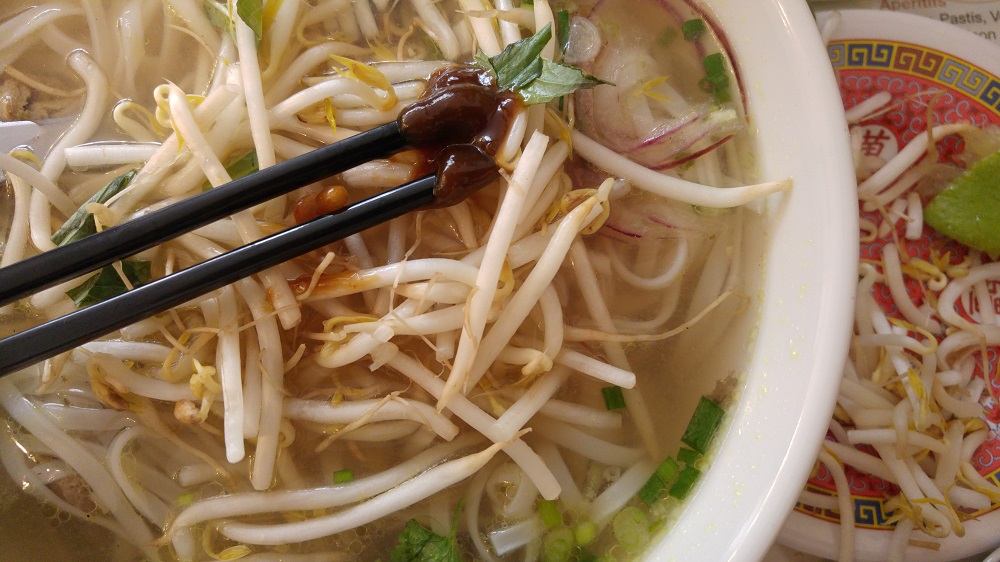 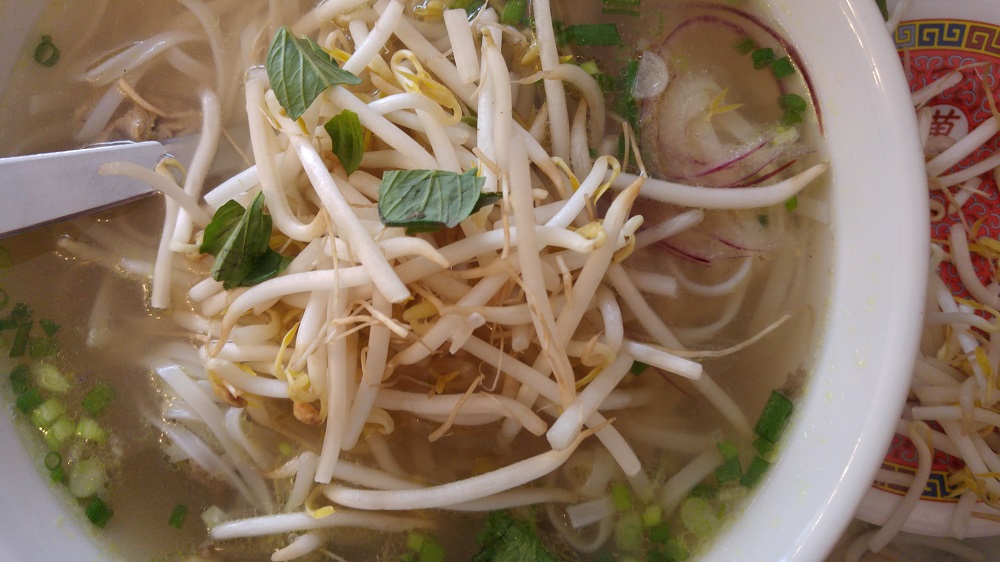 I love the Saveur d\’Asie pho and I advise you to get one if you ever get to Troyes ! It\’s included in the lunch €12.50 menu and costs €9.50 on its own. That is really cheap for a dish I\’ve been waiting for for months ! Just know that if you get an entrée and a drink, you\’ll probably have much trouble emptying your bowl of soup ! I know I\’ve never finished a bowl even when I didn\’t take an entrée or a drink. 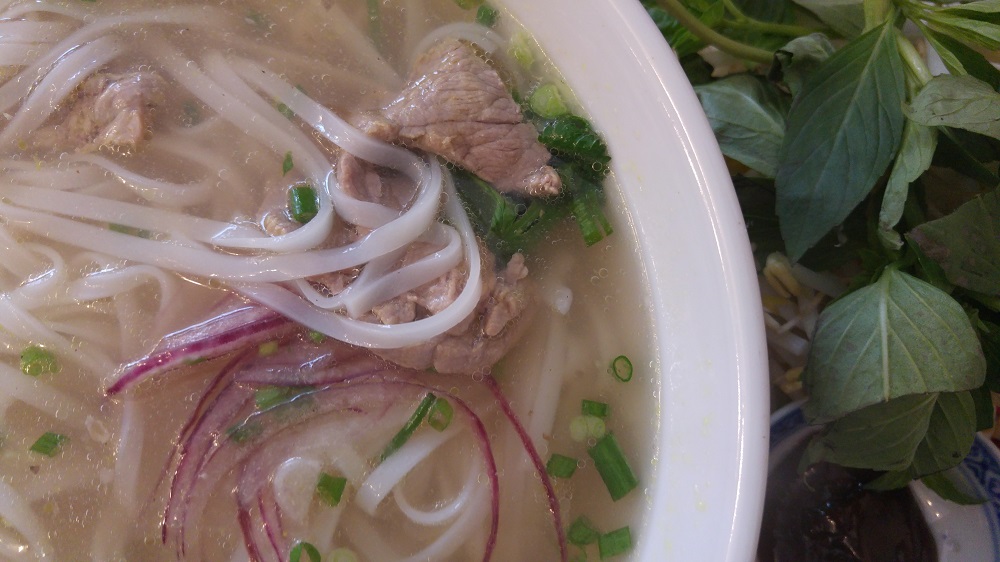 The Ravioli Soup
The last dish is the ravioli soup. I\’ve first known ravioli and dumplings in all-you-can-eat Asian restaurants and they\’re bad there. I don\’t like the rice around the stuffing – I think it looks like silicon. Well at Saveur d\’Asie, they\’re really precise on the quality and taste of food ! That\’s all for the best because if customers love the food, they\’ll come back. 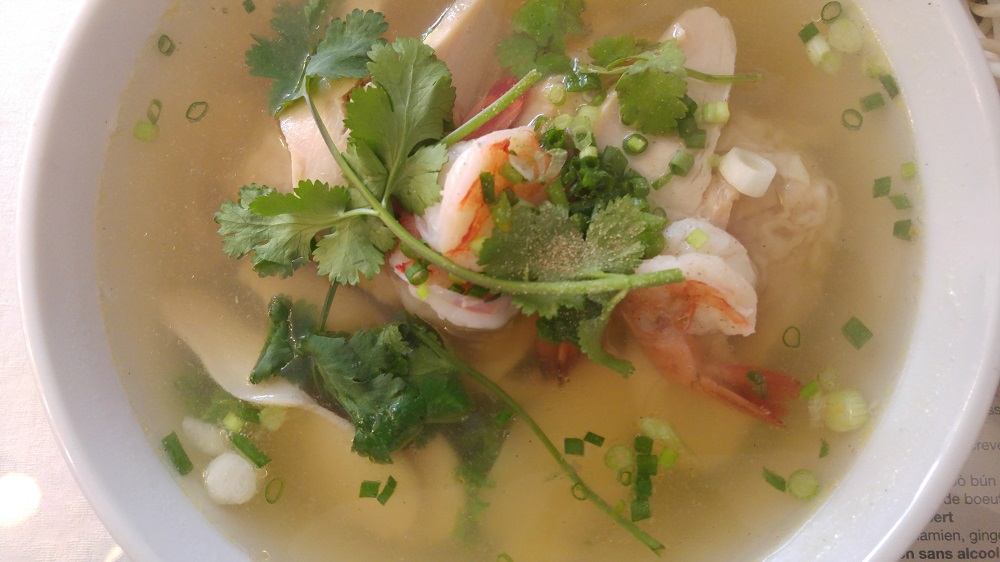 There\’s usually pork in the ravioli soup. If you\’re dressed with hijab, the waiter will probably tell you right away and will offer to get you a soup without pork.
In this dish, there are shrimps, shrimp ravioli, egg noodles and chicken. There are also aromatic herbs like coriander and chives. 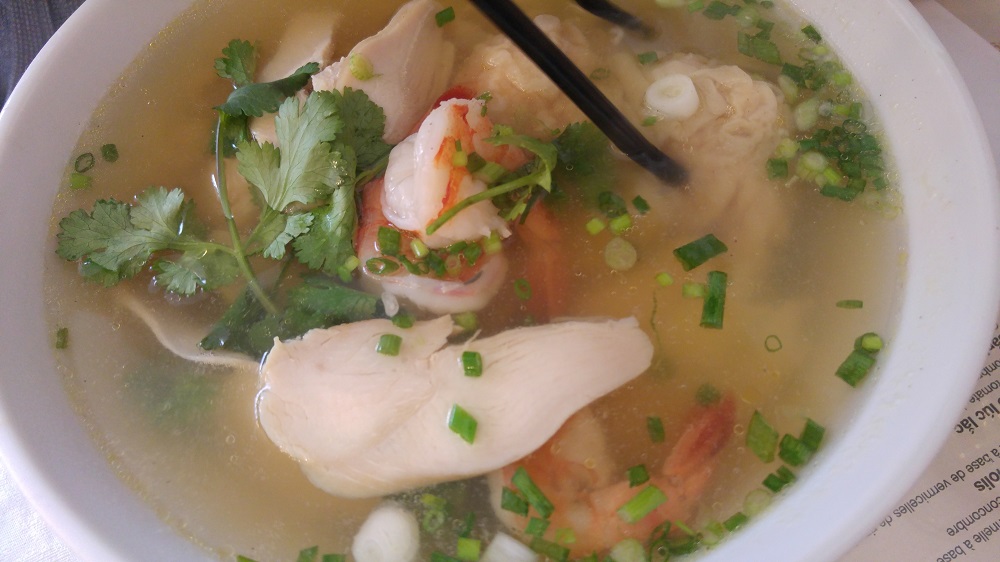 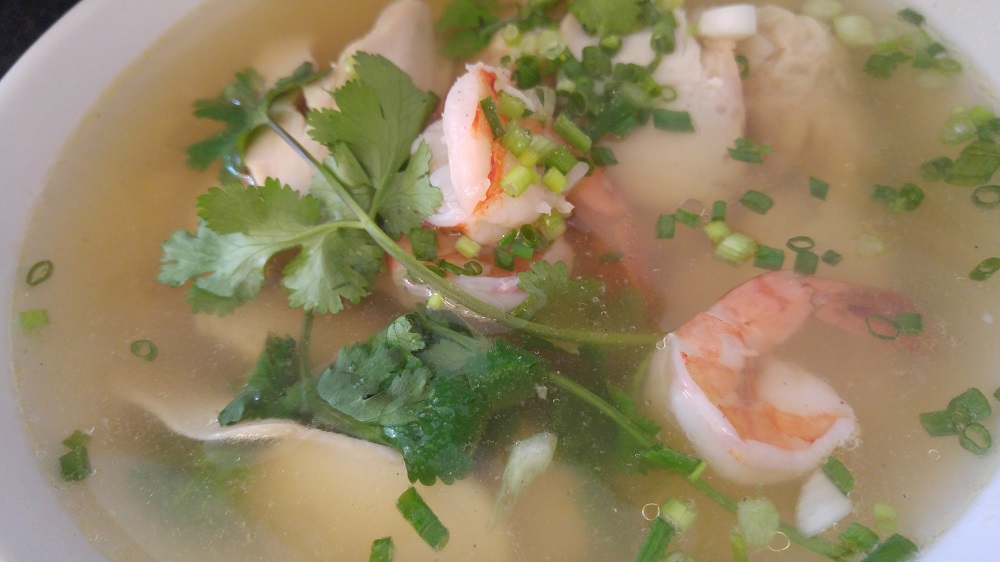 There\’s a sweet and sour taste to this soup that I\’m fond of. This was my friend\’s dish and I just tasted a bit of everything because I don\’t usually like sweet and sour dishes and ravioli. Let me tell you something : next time I go to Saveur d\’Asie, that\’s what I\’ll get !
The stuffing is perfect, the broth is tasty and adding coriander is genius (that\’s one of my favorite herbs…) ! 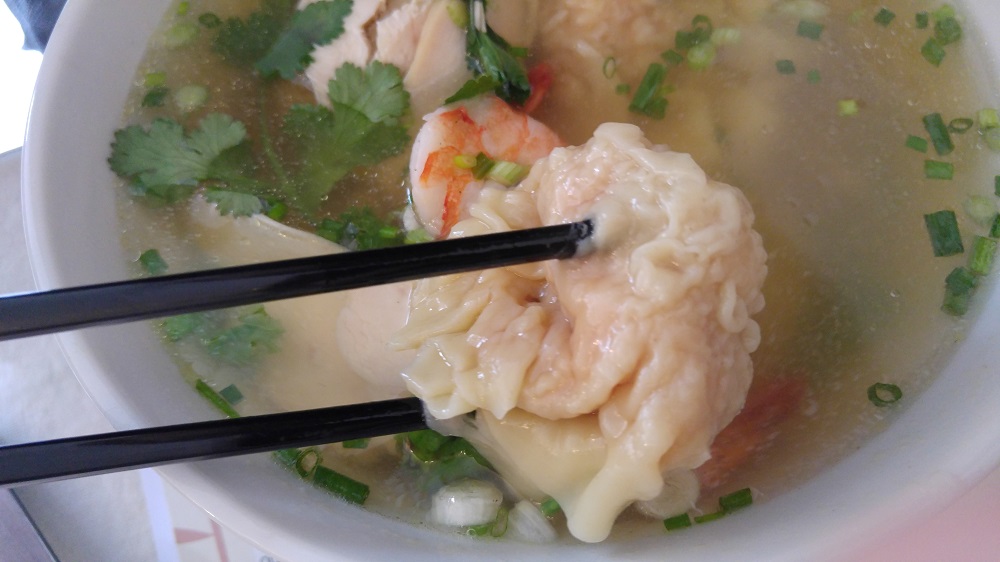 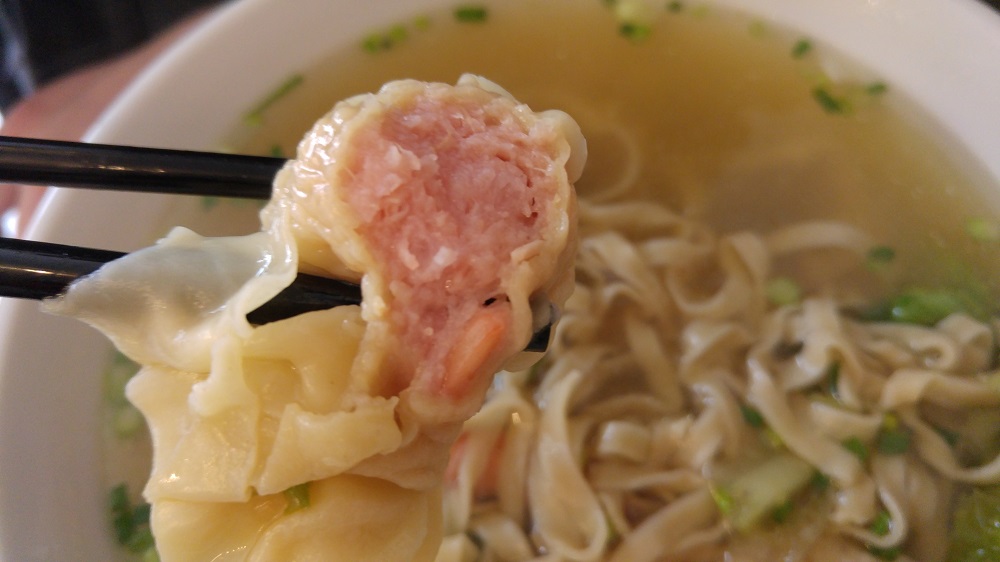 That was yet another great meal with strong exotic notes and textures. I strongly advise you try this restaurant out for everything is great about it : the waiter and cook are really kind, the dishes are tasty and prices are great !
Have you ever been to the Saveur d\’Asie restaurant ? What would you advise I get ?