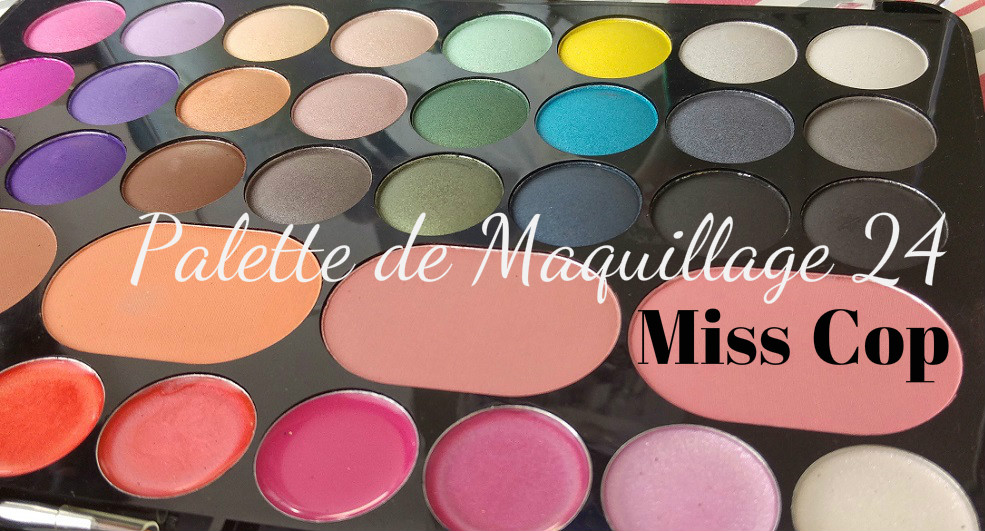 During the Winter sales, I bought a lot of things on sale and some that were not on sale, like the Palette de maquillage 24 from the French brand Miss Cop. I seem to understand this brand can be found in Tati, Fabio Lucci and such cheap stores. I\’ve found it in a Tati store while I was looking for the Cottage handcreams that I seem to find only in this store (aside from the Internet).

I have to admit that while I like underrated makeup brands like Golden Rose, Vivien Kondor or Pierre René Professional, I never try out discount makeup from brands like Miss Cop, Cosmod or Modelite I rather scowl at because of the places they\’re sold in and how cheap they are. If you think alike, get prepared to change your opinion about the Miss Cop brand !
PRESENTATION
I\’ve bought this palette in a Tati store for €9.99. It can be a bit more expensive on the Internet or in other stores and for those of you who\’re not in France, you can find it on Ebay France for sure.
You know how you sometimes hesitate in buying an Urban Decay palette, because you\’re afraid you won\’t be able to eat again before next month comes ? Well I hesitated in buying this one just because I was afraid of losing €10 to an awful quality. So I did what I had to do and swatched it in the store. After several swatches, I knew it had to be mine. I needed to have it !
I think it\’s very important to talk about the cheap and discount brands no one\’s really interested in. I have not seen many reviews about Miss Cop online and that\’s how I didn\’t know if their products were a bargain or not. I hope this article helps you out ! 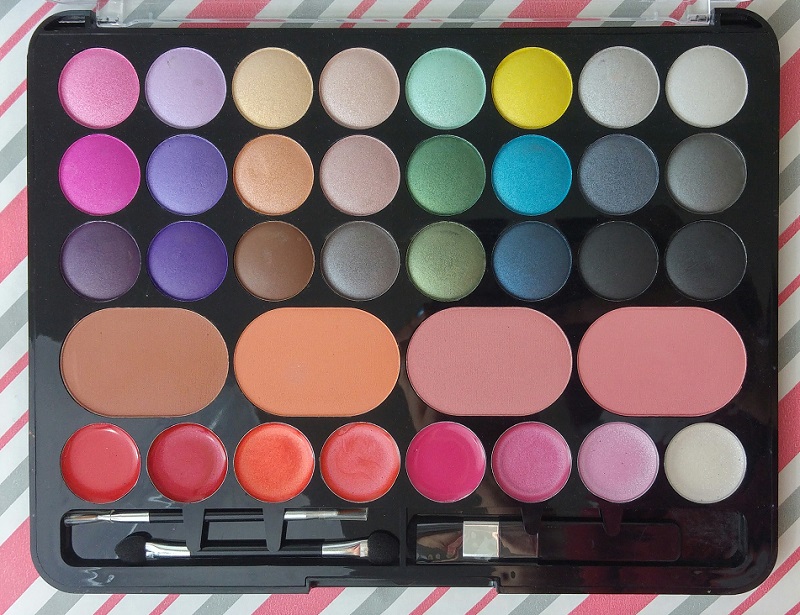 It\’s big, really big. The kind of big you don\’t ever get out of your house once you\’ve bought it. The box is sober and sturdy : black and transparent hard case plastic. It doesn\’t have a cheap look to it and it definitely won\’t open by itself in a bag.
In it you\’ll find 24 eyeshadows, 4 blushes and 8 lipglosses. The size of the blushes and the eyeshadows is great for such a price. I don\’t use the lipglosses much because these days I\’m in love with lipsticks but I was surprised by how much blush and shadow there is.

It\’s funny how the place of the eyeshadows remind me of the Coastal Scents Smoky palette. You can easily divide them in 4 packs of 6 eyeshadows. From L. to R., there are the purples and pinks, the nudes/browns, the greens and blues and the greys and blacks. I have some favorites in each section and I love just how pigmented most of them are !
THE PINKS AND PURPLES 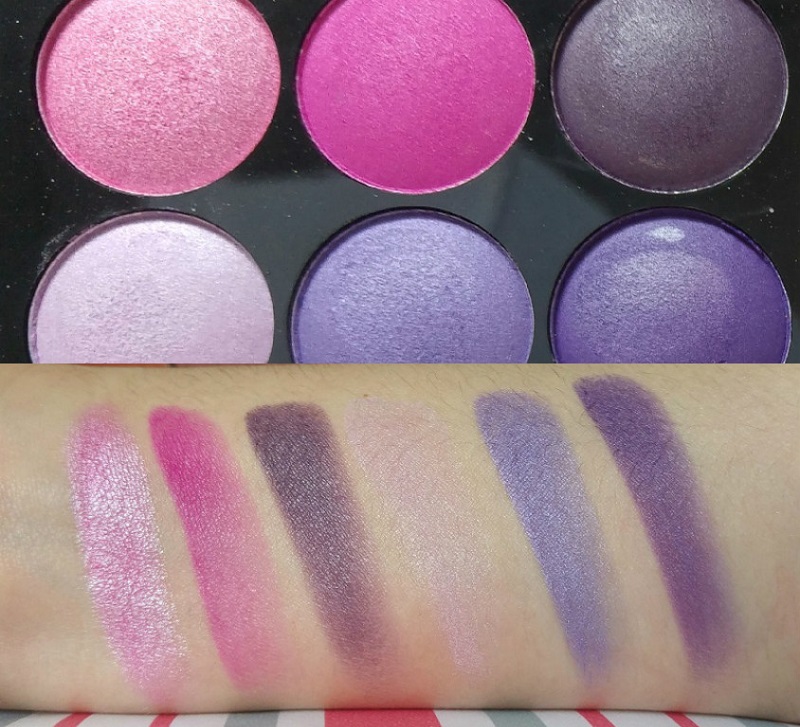 I especially love the three darkest purple eyeshadows and the only disappointment of this section is the lightest purple which pigmentation is really light. I guess I could use it to unify the eyelids before a purple look but it\’s really disappointing all the same.
THE NUDES 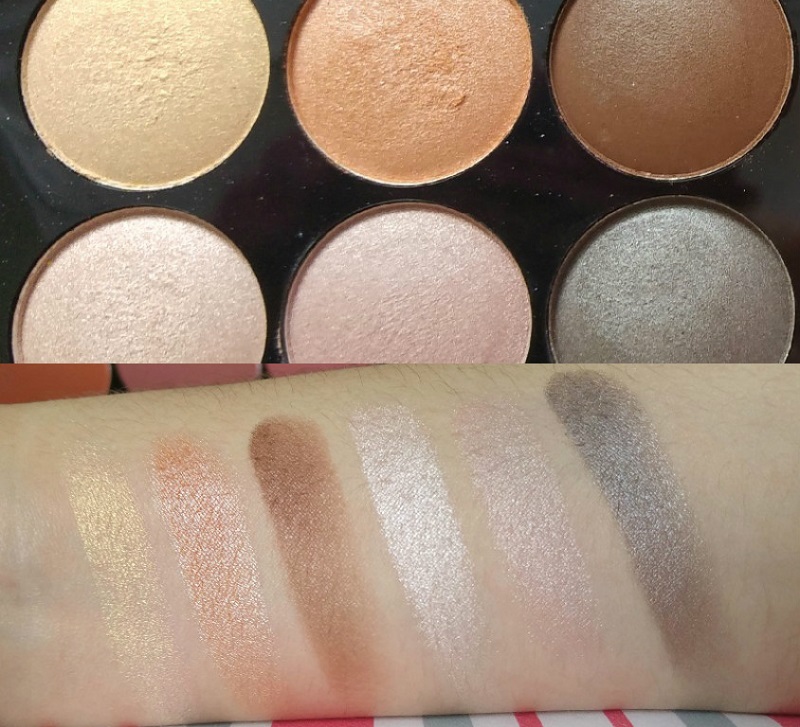 I really like the gold eyeshadow that\’s pigmented enough to be an eyeshadow and just light enough to be used as a highlighter. Thumbs up for the matte chocolate brown which pigmentation is remarkable !
THE GREENS AND BLUES 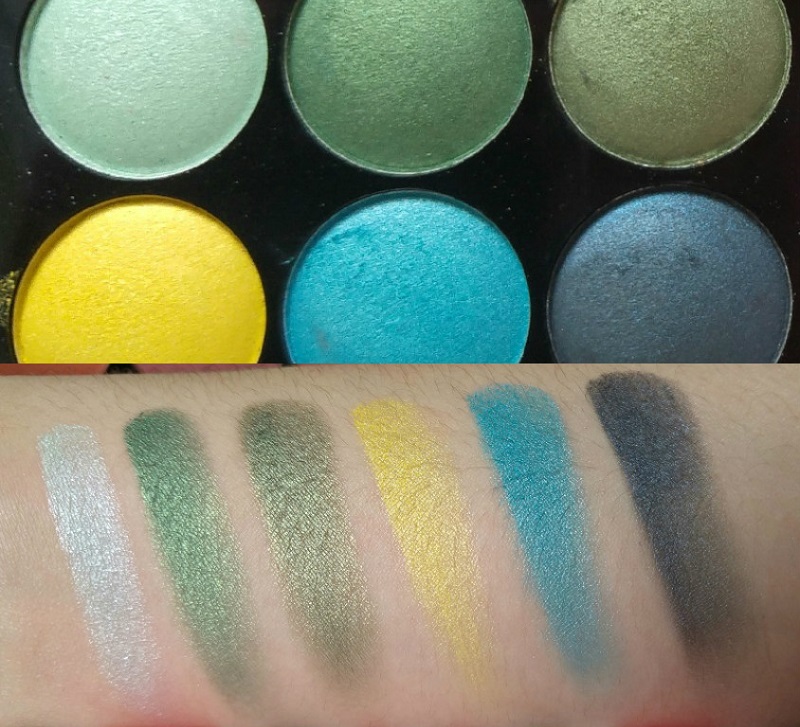 I particularly like the green, khaki, turquoise and navy blue eyeshadows in this section. I\’ve used them quite several times and they\’re shimmery without being too much and easily blendable. I\’m talking to you, women who don\’t like wearing shimmery eyeshadows in daytime from fear of being too much. No problem about that.
I did use the turquoise eyeshadow to define my eyebrows for my geisha inspired Monday Shadow Challenge neon pink makeup.
THE GREYS 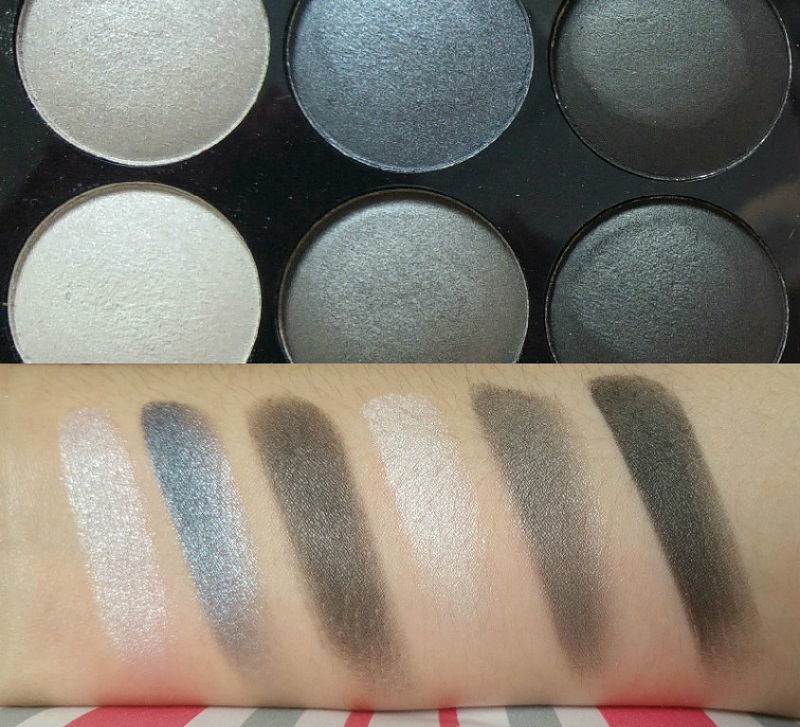 I love the pigmentation of these grey eyeshadows. They\’re all very good value and I like them a lot even though I\’m all for colored eyelids. The fifth shadow is a black one and it\’s the least pigmented among the 6. I guess we could work a light smoky eye look easily using it. The sixth eyeshadow is black too unless it\’s way more pigmented than its neighbor.
BLUSHES 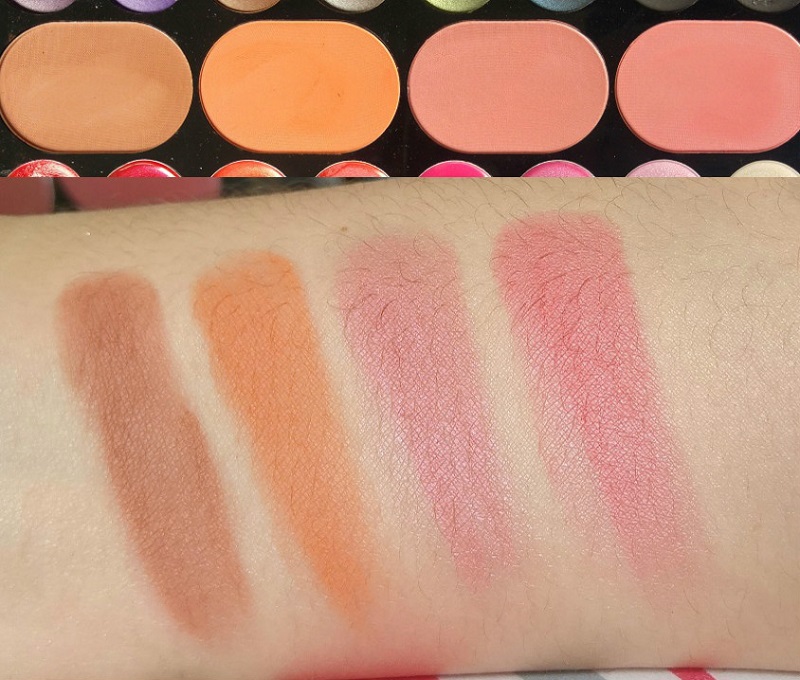 Easy : brown, orangey, and two pink blushes. I\’ll use the brown one as a bronzer because it\’s too dark for my skintone. Then there\’s the coral/orange one I love because that\’s the kind of color that agrees with my face. Both are completely matte.
Then there\’s a cool-toned pink and a warmer toned shade of pink, both lightly satin. All four of them are very pigmented and I think they\’re really beautiful. I\’m not used to wearing pink blush because I blush so easily but I\’ll get to try with these two beautiful shades.
THE LIPGLOSSES

I have not made any swatches of the lipglosses. I thought they were lipsticks but they\’re not. Actually, they\’re quite pigmented for lipglosses but they\’re definitely not opaque. They last 3 to 4 hours on my lips without eating which is correct compared to other brands lipglosses.
THE LOOKS I CREATED USING THE PALETTE DE MAQUILLAGE 24 FROM MISS COP 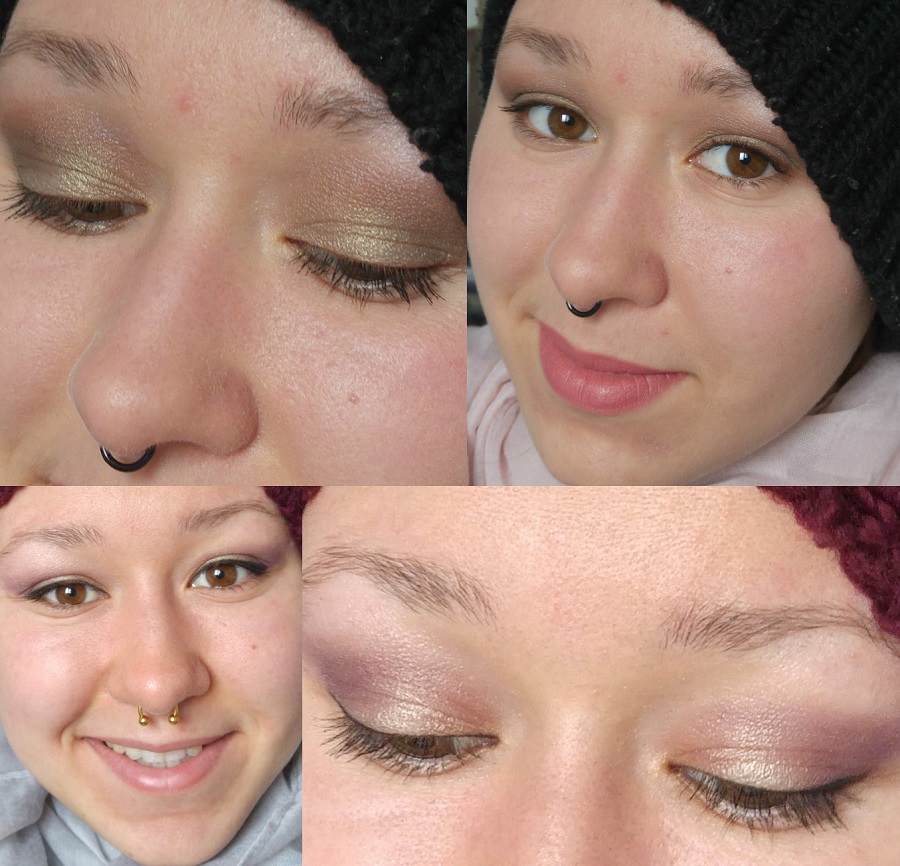 I created the first look with the gold, matte brown and khaki eyeshadows. I finished the look with a thin eyeliner using the matte brown eyeshadow.
The second makeup I got using the darkest plum color, the yellow eyeshadow and the blackest black as an eyeliner.
HOW DO THE EYESHADOWS APPLY AND HOLD ?
Applying the eyeshadows is a piece of cake for they blend really well. They are powdery but less than Urban Decay eyeshadows. If you want to build up the color, it\’s easy to do so and blend it again even after several layers of eyeshadow.
They last about 3 to 4 hours without an eyeshadow primer before starting to crease. With ELF Sheer primer, they last 5 to 6 hours which makes me really happy ! I\’m not one to divide the price by the number of eyeshadows in the palette but it is great value !
I loved this palette so much that I\’ve decided I\’ll try out more discount makeup. I\’ve been to Presty Women, a Parisian subway discount store and I have chosen many more products to try out. Be on the lookout for my haul ! All I have left to do is advise you to go further than your fears let you and get this baby !
Have you ever tried out Miss Cop makeup ? What would you recommand I try ?