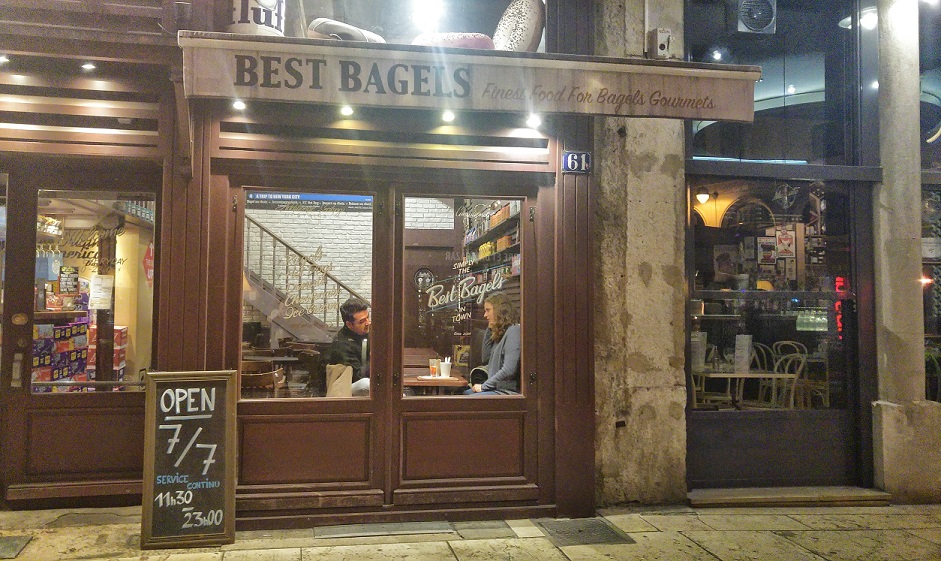 Last week, I went to Lyon and tasted bagels for the first time in my life. Not just anywhere : I went to a restaurant slash US grocery store Best Bagels that has 3 restaurants in Lyon and one in Dijon.

I went to the one in 61 rue Mercière, in the second arrondissement of Lyon (Bellecour Station) where there are plenty of other restaurants as well : trendy gastronomic ones with a dogtooth pattern on their chairs, or famous bouchons lyonnais… 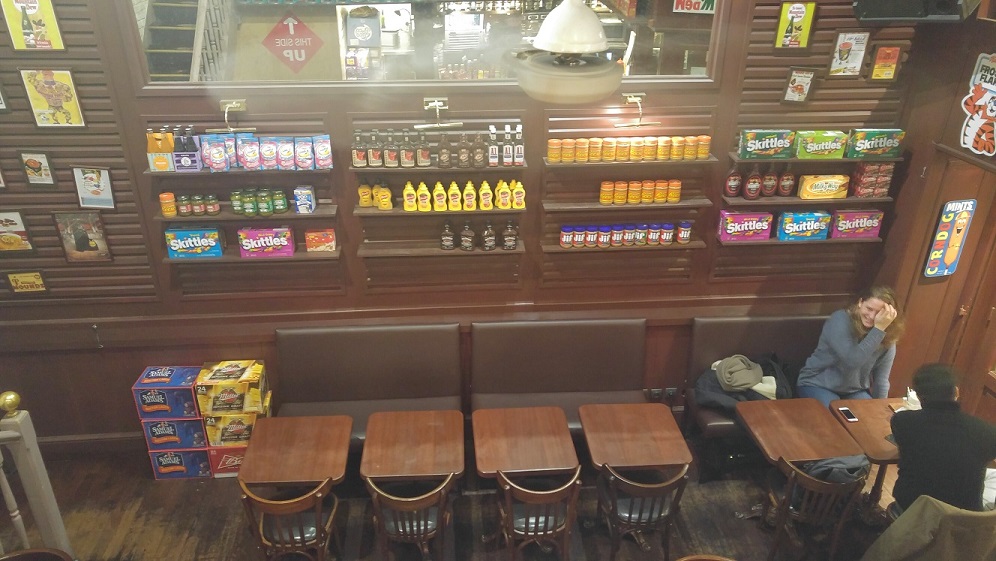 The decoration is original because it makes you imagination burst with images from the States. Every thing you see in the restaurant is for sale : Skittles packs that are unavailable anywhere else in France, Fluff jars, Reese\’s peanut butter and boxes and boxes filled with American soda (Arizona, Dr Pepper and others I\’ve never encountered in our supermarkets !). The menu is quite detailed and can be tricky to understand when you\’re as undecisive as I am. After a long time, I decided to taste a Cape Cod Tuna bagel. As a garnish I set my heart on a coleslaw salad, a Minute Maid apple juice and a Dr Pepper can. Aaaand a cheesecake, because all before were obviously not caloric enough : a creamy, compact cheesecake. 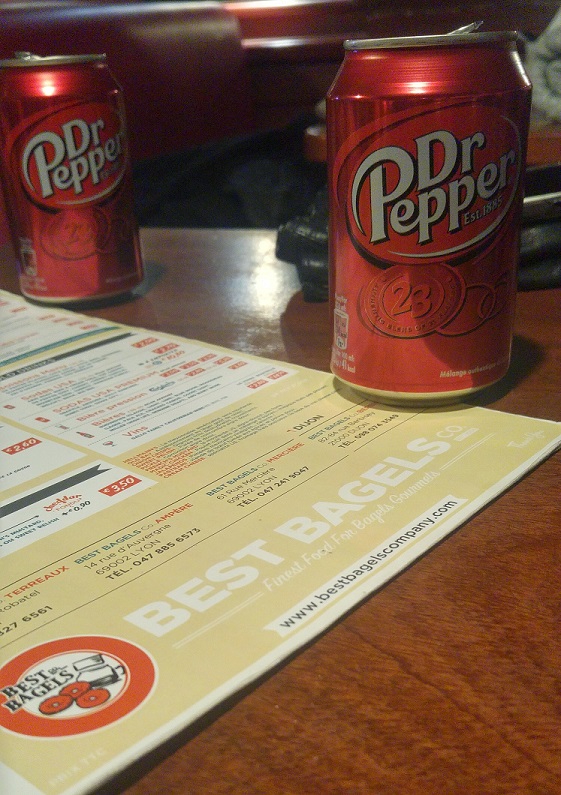 You have to understand that I am a huge fan of American culture, though it is but a melting pot of every other culture in the beginning. Still, I didn\’t know what to expect when I ordered my food. I also have to say that the food is not halal and that resulted in a canned tuna stuffed bagel. It was either that or a salmon/cream cheese bagel and my stomach isn\’t a big fan of this type of mix. The two men waiting our table this evening were of utmost kindness and the service was really quick. They were friendly and answered my questions precisely, quickly and in a nice manner.

One of them brought to my table the puzzle pieces of my dinner : a proud sandwich, golden bread with poppy seeds, canned tuna, a seemingly homemade mayonnaise that is not (BUT it is Hellmann\’s mayonnaise, so it\’s typically american !), caesar sauce, pickles and red onion. 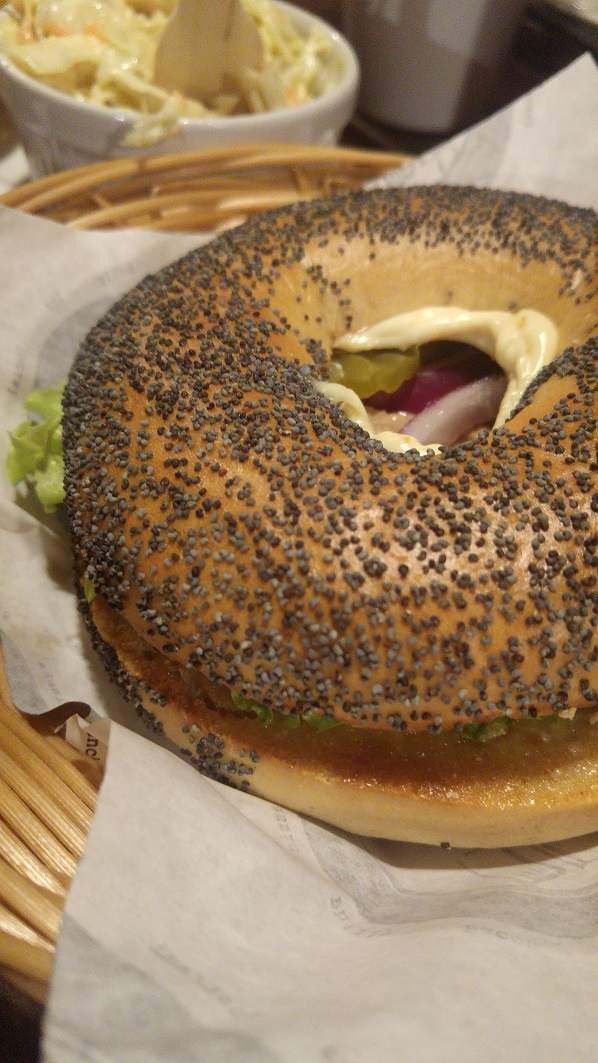 I have to say I didn\’t understand why bagels are so famous. Is it because it\’s an american dish ? Is it because people love sandwiches and fast food ? Mine was really well seasoned but I am not a big fan of bagel bread to be honest. The firm texture astounded me a bit because I am used to eating McDonald\’s or halal KFC sandwiches with the collapsed bread and everything. I was half expecting the same kind of sandwich with the sole difference being a hole in the bread. 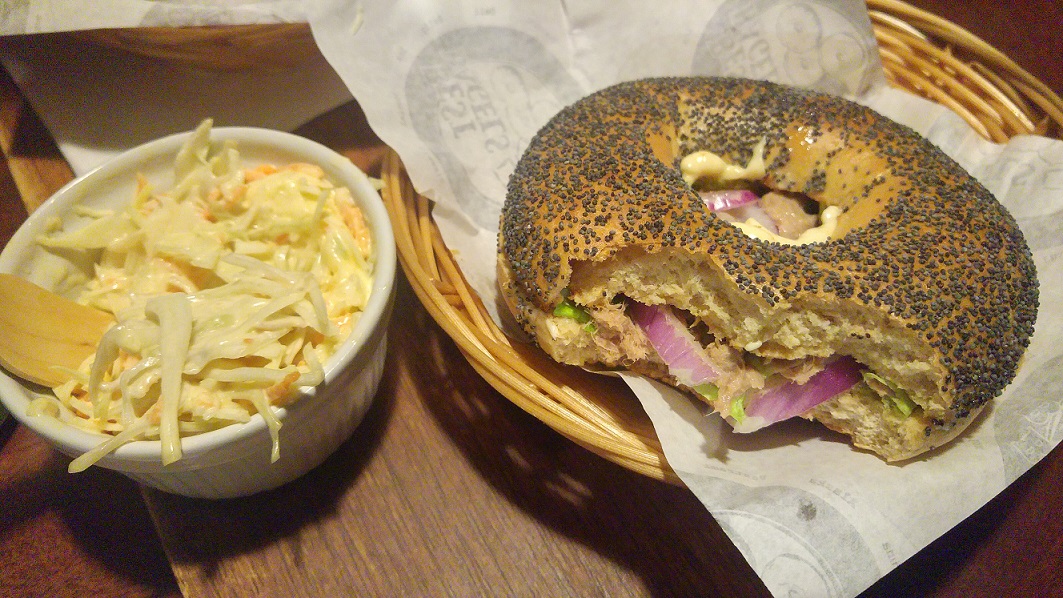 Uh. No.
I\’m seating before a proud lukewarm sandwich with an almost not chemical taste (uhuh, Hellmann\’s mayonnaise is still a jarred sauce !) and this is almost creeping me out. 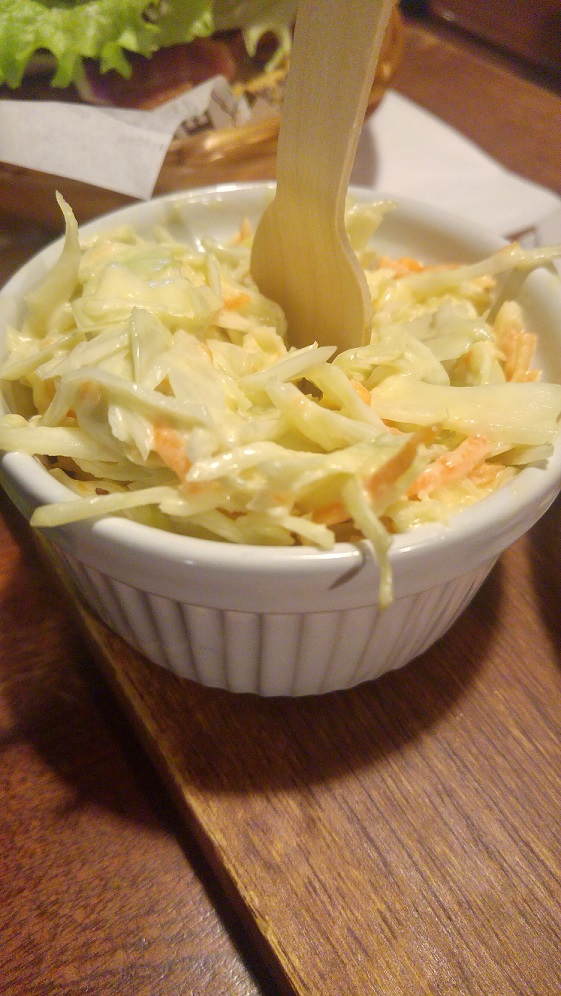 As for the coleslaw, I didn\’t like it. I am also used to buying it at local supermarkets and the sauce was completely different. I didn\’t finish it but it was really refreshing, I\’ll give it that ! 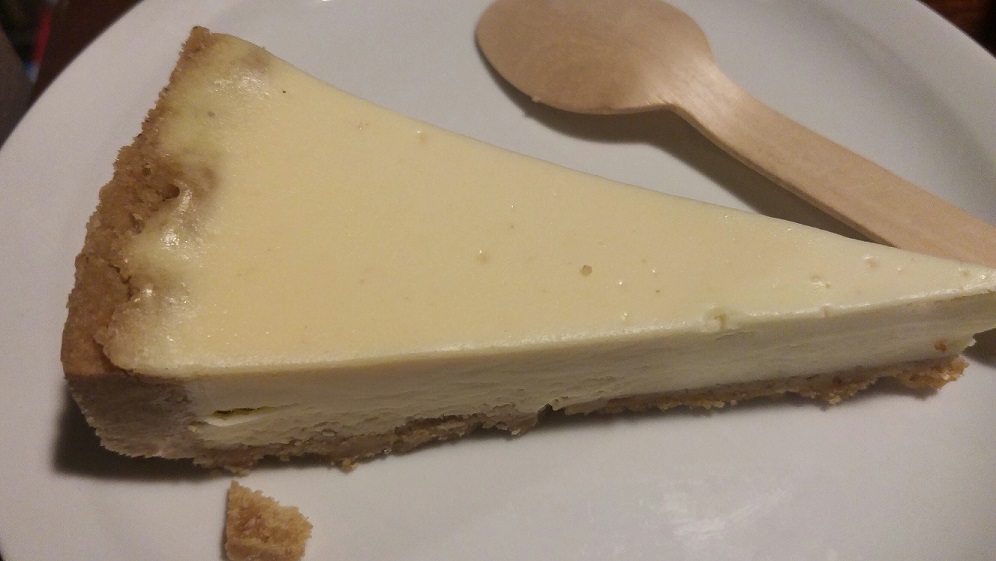 My dessert was a piece of (cheese)cake. I don\’t like caramel cheesecakes or lemon cheesecakes, the best ones to me are the basic ones. It is a dessert I love cooking though I never get the famous New York consistency.
This one was good but not illuminating. I love me a cheesecake made with Speculoos and my mouth didn\’t figure out which biscuits had been used to make this one. They fucked up my taste buds !

I seem to recall the menu (bagel, beverage and garnish) was about €9. That is a good price, compared to the kebab menu I bought in Lyon as well for €7.50 and that was completely disgusting. The cheesecake alone costs €4.10 and that\’s quite pricey for this recipe but I remember it was included in a menu so it was a bit cheaper.

All in all, I really enjoyed discovering a new type of food but I think people who already know it would enjoy much more. I was really expecting something new and astonishing so I was a bit disappointed. But I love the decoration and the place where you can actually buy American groceries. Well, I guess it\’s the same as for makeup : you buy it to wear it and not to admire the packaging…
In this place, it\’s really nice to be with some friends and this little restaurant is quickly filled up from 7 pm. It\’s open every day from 11.30 am to 11 pm non stop ! Are you a US buff ? Try it out !